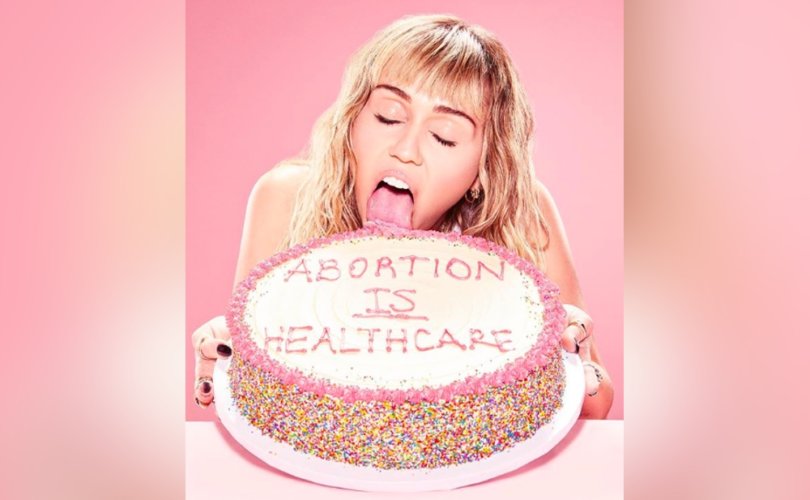 September 19, 2019 (LifeSiteNews) – As the battle lines over abortion become starker and progressives double down on support for feticide from conception until birth, abortion activists have been rallying all of the cultural forces at their disposal to combat the wave of state-level pro-life laws passing across the United States.

Unlike the pro-life movement, the abortion industry has a not-so-secret weapon: Pop stars and rock musicians who are worshipped by millions of young girls across the continent and hang onto their every word. For many girls, these stars are their role models—and those role models are making it very clear that killing pre-born children in the womb is something to celebrate.

Selena Gomez, the formerly squeaky-clean Disney star who once wore a purity ring to let her fans know that she was waiting for marriage, has long swapped out that piece of jewelry with something very different: A “1973” necklace to “honor” Roe v. Wade, the abortion decision that resulted in the destruction of more than fifty million pre-born children in the womb and counting. Miley Cyrus, her fellow once-straitlaced Disney alumni, posted a photograph of herself to Instagram wielding an enormous cake with the words “Abortion is Healthcare” written across it with pink icing, her jaws gaping wide to take an enormous bite. Both pop stars are now singing a distinctly different tune—and millions of young girls are listening.

Many pop stars have begun to openly campaign against protections for pre-born children in the womb, with Ariana Grande, Lizzo, Billie Eilish, Dua Lipa, Demi Lovato, and Lady Gaga all signing a letter produced by Planned Parenthood (which facilitates hundreds of thousands of abortions every year) titled “Bans Off My Body.”

The letter solemnly stated that: “Freedom is at the foundation of music. Through music we have the power to create, to be who we are as individuals, to speak and live our own truth. Access to sexual reproductive health care [feticide] is about that same freedom.”

In response to Georgia’s heartbeat bill, which would protect babies in the womb once a heartbeat can be detected, Grande (also Disney alumni) donated the proceeds of her June 8 Atlanta concert, roughly $250,000, to Planned Parenthood.

The rapper Nicki Minaj, who specializes in filthy lyrics and regularly poses as a stripper in her music videos, also signed the letter. Interestingly enough, she told Rolling Stone several years ago that she had an abortion when she was fifteen years old because she “wasn’t ready. I didn’t have anything to offer a child.” That said, however, she also admitted that the choice she made had “haunted me all my life.” Abortion, as it turns out, is not always freedom. Usually, the destruction of the child leaves his or her parents in an entirely different set of chains.

There’s more, too. Rihanna has come out in opposition to recent pro-life laws, posting furiously that Alabama Governor Kay Ivey should be ashamed of herself. Country star Kacey Musgraves also responded to the Alabama law, demanding to know “Sooo what’s gonna happen when one of those Alabama senators knocks up one of his mistresses?” Katy Perry has donated thousands of dollars to Planned Parenthood and taken to social media to brag about it, Madonna said that Jesus would have supported abortion, and Pink claimed that Alabama’s pro-life law was the equivalent of Margaret Atwood’s dystopia A Handmaid’s Tale, where women are kept as sex slaves and raped to produce children for the religious elites.

After several years of taking it on the chin for refusing to influence her fans politically, Taylor Swift has also come out swinging for the Sexual Revolution. In August, she launched her new smash hit “Lover,” and released a music video mocking Christians and red-state Americans, showing ugly, angry people wielding signs with slogans such as “Homaskeualty Is Sin!” The not-so-subtle implication, of course, is that Christians are not only homophobic and hateful (as evidenced by their contorted faces), but they are also so stupid that they cannot even spell. At the VMAs earlier this summer, she used her new songs to advocate for the Equality Act, which would both eliminate pro-life laws across all fifty states as well as dramatically roll back religious liberty.

Interestingly, the decadent musicians of our dying culture are happy to celebrate abortion, but they still can barely bring themselves to sing about it. And when they do, there is no celebration. Instead, their songs emerge as primal howls of pain and loss, emanating from the empty void left by their lost children. When they speak, they demand that abortion be available for everyone, and urge their legions of fans to support abortion giants like Planned Parenthood. But when they sing, they sing things like Sinead O’Connor’s ode to her little girl lost to abortion:

Think about my little girl
Her yellow skin and her dark curl
And how her father's heart was frozen
I spoke to her and I said:
“You won't regret the mother you have chosen”
I lied. Where's she tonight?

I left him now we're apart
And I think about his cruel heart
And how his lies have left mine broken
To think that I spoke to him then I said:
“She won't regret the father she has chosen”
I lied. Where's he tonight?