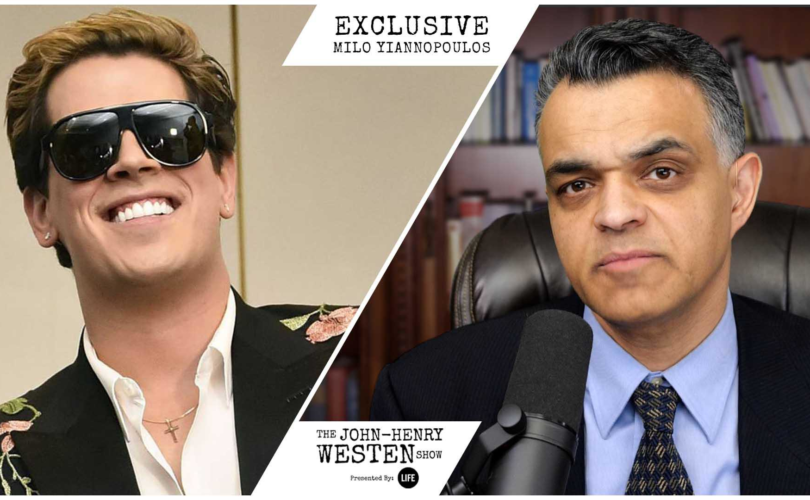 March 12, 2021 (LifeSiteNews) — Today, Milo Yiannopoulos opens up about his journey out of a homosexual lifestyle. He warns “white liberal women” that he is on a new mission to help gay men journey out of homosexuality.

Yiannopoulos speaks from the heart as he shares what he sees to be “a cluster of symptoms from childhood trauma,” the role St. Joseph played in his transformation, and how he hopes to help others.

In addition to his personal story, Yiannopoulos and I discuss the state of the Catholic Church.

“It has taken me 36, 37 years to begin to break free from what I now recognize to be the symptoms of the fallout from childhood experiences,” Yiannopoulos says.

Yiannopoulos continues to open up about his journey, including how priests and St. Joseph have played a role in his re-embracing the faith. But not all priests.

Yiannopoulos speaks about Pope Francis, saying, “I’m very uncomfortable with lots of the things he has done to sort of pander to the press.” He points to Pope Francis’ cover-up of sexual abuse scandals as “equal in magnitude and moral horror to the abuses themselves.” Yiannopoulos was sexually abused by a priest when he was 13-years-old.

“I expect better from my Church, and when I am speaking on college campuses with more vigor and vim, and even fire and brimstone about abortion than any bishop in the United States has ever spoken in public about abortion — I expect better,” Yiannopoulos tells LifeSite.

When asked about living with his former lover, Yiannopoulos said, “living as brothers is the best way that I can describe what is happening to me. And if that becomes a problem, that’s a problem that will be remedied.”

Finally, Yiannopoulos speaks about the cancel culture. He told me has never been more free than he is now. Since he is already “canceled,” he feels completely free to share the truth without concern.

You truly don’t want to miss this video interview as Milo bares his soul in an effort to help others.