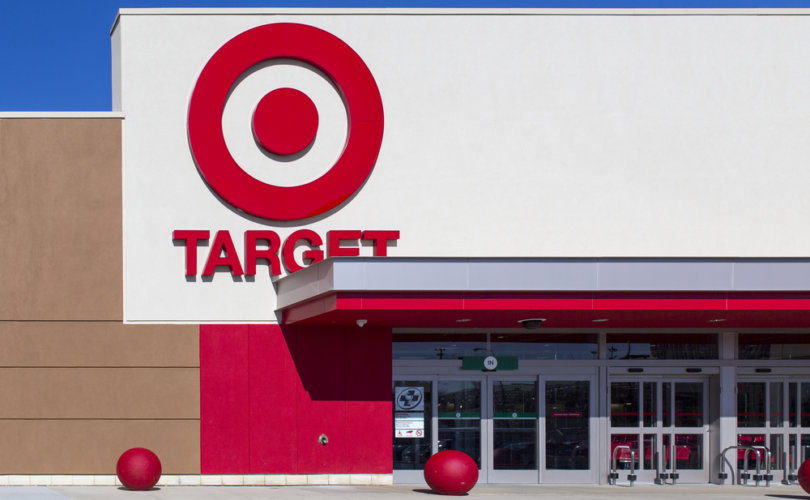 August 18, 2016 (LifeSiteNews) – While Target’s announcement that it will add single-stall restrooms to all its locations by next March is a step in the right direction, it doesn’t solve the underlying problem – not by a long shot.

Target made the $20 million investment in PR after a massive national backlash over its unisex restroom policy. Members of one biological sex are free to use the restrooms and changing rooms of the opposite sex, as long as they say they identify as transgender.

Some think single-stall, locking restrooms may give children and women an emergency haven, but it’s from a threat that Target needlessly created.

Granting this option does not assure customers’ safety. What if the store’s only single-stall restroom – there is typically one per store – is out-of-order? What if it is occupied, and a young girl cannot wait? What if someone unaware of their restroom policy instinctively walks into the wrong restroom?

This policy also misses the point of our objections. Some well-meaning people have suggested that public accommodations install a single-stall restroom for transgender people who do not feel comfortable using the restroom of the appropriate biological sex. But Target’s policy is the exact opposite of that. The single-stall restroom is for you, if you’re not progressive enough to be naked and vulnerable in the presence of a man, as you will be if you use the standard restroom facilities.

The threat to children, and the magnet that makes them a Target, still remains inside every single Target store from coast to coast. None of that was necessary before Target very publicly appealed to liberal elites by calling attention to a policy that repeals common sense.

Previously, if a man entered a women's restroom, it was a red flag. Now, it is simultaneously a “civil right” and a sexual predator's fantasy come true.

Still, the fact that Target modified its stores at all gives us hope.

One lesson we need to take home from this is that the fight for safety and sanity in the nation’s restrooms may be won the same way the civil rights movement began to change the nation: through economic power.

Target officials did not listen when family advocates – including this website – warned that this would expose young girls to peeping Toms and sexual predators. They remained silent when 1.4 million people signed up for the American Family Association’s boycott of the chain. National protests, which continued through last weekend, made no difference.

Even the fulfillment of those predictions – as voyeurs, even including a transgender man, filmed female customers – left them unmoved.

Then they looked at their spreadsheet.

Target’s revenues are down more than $1 billion from the same time last year. To put that in perspective, that’s larger than the GDP of the island nation of Grenada.

Suddenly, they had an epiphany.

Our currency gives us a voice, a chance to “vote with our pocketbooks.” While Target is a private business and may set any restroom policy it wishes, it is also free to suffer the effects of tuning out millions of customers.

We, too, are free to vote – as it were – every time we spend a dollar, purchase an item, or visit a store. Just as the civil rights movement boycotted buses and segregated establishments, we can flex our fiscal muscles and bring about real change to protect the innocent.

We need to take home another lesson, too. We can change things. We are often given to despair at looking at the state of the world. But one voice, one choice, one decision can still have an impact.

Don't give up hope; and don't give up on Target – if they're still in business next year.