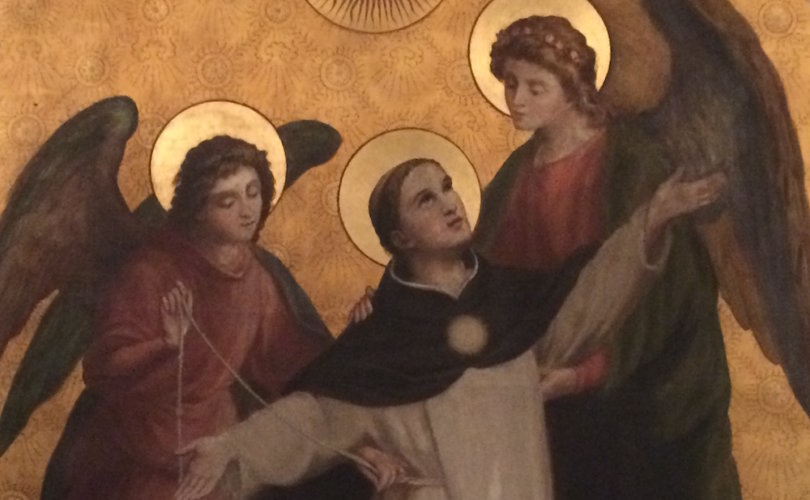 September 16, 2019 (LifeSiteNews) — Looking over the landscape of late modernity, one can see a number of dominant trends of thought. Two of them, I believe, are especially pernicious: the attitude, brought about by a combination of materialism and technology, that sees all of nature — including human nature — as raw material for exploitation (“If we can do, we should do it,” or more classically expressed, “might makes right”) and the rise of a thousand vague “spiritualities” by which this selfish attitude is glossily packaged in a socially acceptable and psychologically self-deceptive manner — in other words, a do-it-yourself spirituality that is, at its core, still some form of egoistic hedonism.

How did we sink to this point, and how do we escape from it? There are many ways to answer those questions, but here I would like to approach it by contrasting three of Western history’s most influential thinkers.

Sometimes called “the father of modern philosophy,” René Descartes (1596–1650) in his mature writings repudiated the Catholic philosophy and theology he had learned at the Jesuit school of La Flèche. In this regard he exemplified one of the most notable traits of modern philosophers: their continual effort to find the perfect foundation on which to build their system, which requires departing from or even destroying the foundations already laid by others. It is the opposite of the Christian principle: “what I received I passed on to you as of first importance” (1 Cor. 15:3).

We can see this parting of ways in a famous passage from Descartes’s: The Discourse on Method: “In place of that speculative philosophy taught in the schools, it is possible to find a practical philosophy,” by means of which we could “render ourselves as masters and possessors of nature.” Not, in other words, respectful students, custodians, and assistants of nature, who learn to work with it for our good and for the good of the whole, but rapists who overpower nature for their own pleasure, slave-drivers who subject creatures to their own wills. Why should we shift our attitude in this way? Descartes tells us:

This is desirable not only for the invention of an infinity of devices that would enable one to enjoy trouble-free the fruits of the earth and all the goods found therein, but also principally for the maintenance of health, which unquestionably is the first good and the foundation of all the other goods of this life … [I]f it is possible to find some means to render men generally more wise and more adroit than they have been up until now, I believe that one should look for it in medicine. … [O]ne could rid oneself of an infinity of maladies, as much of the body as of the mind, and even perhaps also the frailty of old age, if one had a sufficient knowledge of their causes and of all the remedies that nature has provided us.

“An infinity of devices” for “enjoying trouble-free the fruits of the earth”? Here we have the blueprint of the technological and materialist revolution that implicitly or explicitly takes bodily health as the highest good or summum bonum, bodily suffering as the primary evil, and medicine as the supreme discipline. God is not so much fiercely rejected as He is ignored, or rather, shown the door because He does not deliver the immediate physical goods on which we set our hopes. This is what John Paul II would call “practical atheism.”

In another work, Principles of Philosophy, Descartes compared philosophy to a tree whose root is metaphysics, whose trunk is physics, and whose three branches are medicine, mechanics, and morals. After introducing the metaphor, he writes: “Now just as it is not the roots or the trunk of a tree from which one gathers the fruit, but only the ends of the branches, so the principal benefit of philosophy depends on those parts of it which can only be learnt last of all.” The fruit of knowledge is, on the bodily side, an abundance of devices for postponing or tranquilizing death and, on the psychic side, the gritty Stoicism to accept life in a universe of indifferent and impersonal forces.

One of the first to see that Cartesianism had nothing but this to offer mankind was Gottfried Wilhelm Leibniz (1646–1716), one of the inventors of calculus, who around 1679 wrote a perspicacious letter on God and the soul in the course of which he says:

Descartes’s God, or perfect being, is not a God like the one we imagine or hope for, that is, a God just and wise, doing everything possible for the good of creatures. Rather, Descartes’s God is something approaching the God of Spinoza [which is identical with the impersonal cosmos]. … That is why a God like Descartes’s allows us no consolation other than that of patience through strength. … It is impossible to believe that this God cares for intelligent creatures any more than he does for the others; each creature will be happy or unhappy depending on how it finds itself engulfed in these great currents or vortices. Descartes has good reason to recommend, instead of felicity, patience without hope.

After centuries of optimistic Cartesian rationalism had run their course and the world seemed to have been emptied of meaning by materialism and stripped of mystery by technology, the philosopher Martin Heidegger (1889–1976) attempted to make a new beginning. Yet his response, presented as the polar opposite, shares in the same sickness: philosophy is being-toward-death, acknowledging and embracing the inevitability of annihilation. Genuine “care” for others and “authenticity” within oneself are established in this courageous welcoming of non-being. Is there not a strange resemblance between such thoughts and the program of enervation espoused by the “compassionate Buddha,” the great teacher of spiritual euthanasia? Did the Christian West have to wait so long for a philosopher to give them the same message as the ancient Far East? And yet, without the virtues of the Far East, we are much more likely to take this message of despair as an excuse for a desperate clutching at evanescent pleasures: “Eat, drink, and be merry, for tomorrow you will die.”

The wise folly or foolish wisdom of the Apostle Paul and of his medieval disciple Thomas Aquinas is as far removed from Cartesian pride and Heideggerian despair as the extremes of vice from the mean of virtue. Just as the lofty mountain rises far above the mediocre lowlands, the “mystical theism” of Aquinas, founded on the personal and transformative mystery of God, rises far above the practical atheism of Descartes and the speculative atheism of Heidegger. St. Thomas already saw their positions and rejected them, as he had done with thousands of other objections to the truth of the Christian religion and its metaphysical foundations.

No wonder Pope Leo XIII, in his landmark encyclical Aeterni Patris of 1879, proposed St. Thomas as the thinker most suited not only to replenishing the rickety curricula of seminaries and schools, but also to guiding the Church’s creative philosophical and theological response to modernity. Leo XIII was advocating a creative fidelity to tradition — the exact opposite of the mentality of building from scratch that we saw in the father of modern philosophy.

The advice of Leo XIII and the wisdom of Aquinas are no less needed in our day. Indeed, our failure to heed them will leave us a prey to Cartesian pragmatism and Heideggerian pseudo-mysticism, or to some frightful combination of the two.