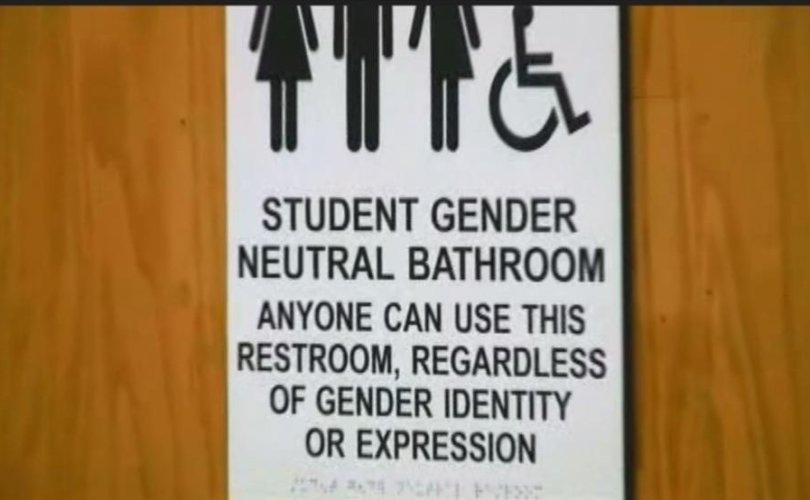 “Yes, the thought of male genitalia in girls’ locker rooms – and vice versa – might be distressing to some. But the battle for equality has always been in part about overcoming discomfort – with blacks sharing facilities, with gays sharing marriage – then realizing that it was not nearly so awful as some people imagined.”

So intones the editorial board of The Charlotte Observer. It seems that America will never atone for its original sin, slavery, and that as long as anyone remembers the segregated water fountains and lunch counters and bus seats of the American South, so long will it be impossible for Americans to resist any monstrous thing dressed up in the garb of Equality. This will be true even when the thing will demand massive inequalities in other and more important respects.

These days, a girl is beset all around with propaganda that would tear down her natural modesty, and usher her into a life of capitulation to baseness – with the predictable maladies to follow: unwed motherhood, abortion, the collapse of amity between the sexes, the coarsening of the culture, divorce, and sexual chaos. One of her last defenses is just this thin screen of modesty. And we want to tear it down, why?

First let us dispense with the false analogy. If a girl does not want to shower in front of a boy, that is not like not wanting to shower in front of another girl whose skin is darker than hers. Why not, you editors of The Charlotte Voyeur? Think. Do try. It is hard at first, and people will notice the smell of burning wood, but eventually even journalists can do it. Think.

The one case involves something peculiar to America and her history. It would not have arisen in ancient Rome, for example. Why do we not know the racial characteristics of Saint Augustine, born in North Africa to a father with a Roman name and a mother with a Punic name? Because no one thought it important to mention. The segregationists of the old South tried to justify their actions by calling upon racialist theories invented for the nonce, and plenty of “progressives” in the early twentieth century were glad to lend their help. But nobody ever thought it was immoral for whites and blacks to eat together, play together, use the same bathrooms, and so forth. Poorer whites did so. Children did so. No moral issue was involved.

The discomfort that the segregationist felt when he had to sit on a bus next to a black man was not a moral discomfort, but a social one, born of habit and custom and racialist instruction. That was wrong.  He should not have felt that discomfort. The situation did not warrant it.

What then about the teenage girl who does not want to shower in front of boys? Take the current fad of the “transgender” out of it. It is perfectly natural and right that she should feel not only discomfort but acute shame to be naked in front of a boy. Important virtues are involved: decency, modesty, purity, and chastity. What kind of person would feel no shame in being naked in front of people of the opposite sex? A person for whom those virtues mean little as regards other people, and nothing as regards himself. What kind of person would coerce a young girl or boy to be present while someone of the opposite sex was stripping? Take the fad out of it. Take the school setting out of it. A monster, that's what: someone who should be in the custody of the police.

A girl who does not want to shower in front of a boy is exhibiting a perfectly natural modesty. It is right that she should feel so. We want to encourage such feelings. We want to foster them and direct them toward high and noble ends. She is not being old-fashioned or stubborn. These days, she is beset all around with propaganda that would tear down her natural modesty, and usher her into a life of capitulation to baseness – with the predictable maladies to follow: unwed motherhood, abortion, the collapse of amity between the sexes, the coarsening of the culture, divorce, and sexual chaos. One of her last defenses is just this thin screen of modesty. And we want to tear it down, why?

The rest of the editorial in The Charlotte Exhibitor gives the ballgame away, unwittingly. What are they after, really? Why are they eager to sacrifice the innocence of children upon the altar of the New American Moloch? What is the gain, as far as they are concerned? To assuage their tender feelings as regards boys who want to pretend that they are girls? Is that it?

No, that is not it. It is something bigger than that, something in which they have a big stake. It is the whole Sexual Revolution itself, that juggernaut, leveling everything in its way, robbing the common people of their power to rise up against their masters, turning lower class men into wards of the state within prison or without, subjecting the family to the oversight of social workers and bureaucrats and educationists and other friends and relatives of the editors of The Charlotte Peephole, enshrining the Revolution in constitutional law so that no one will ever be able to ask whether or not being flattened by the juggernaut was altogether a healthy thing.

Notice the blithe carelessness with which the editors equate eating lunch with sodomy. No one in the segregationist South ever said that it was immoral for a black man to eat a sandwich. The social circumstances were what they wanted to control. But until the day before yesterday, everyone in the west believed that there was something at least suspect about sodomy, and almost everyone believed that it was immoral and a proper object of disgust. They needed no peculiar theories to justify their belief. They need only point to the obvious nature of human bodies, male and female. “That don't go there,” says the farmer.

I use the word disgust advisedly. There are things that should arouse in us a physical revulsion, because they involve a gross abuse of the body and of bodily functions. Again, take the particular issue out of it – homosexual relations. I want to establish the principle. Should we feel disgust when someone invites us to ingest what is foul, and not food at all – mud, or slime, or feces? Should we feel disgust merely to have to watch someone doing it? Would we not find it vile if someone told us that we had better get over that natural revulsion? If the answer is yes, of course, then the question is whether certain forms of sexual behavior should also rightly arouse feelings of aversion, not because of the circumstances in which the behavior occurs, but because of the behavior itself.

What the editors want is to smother those natural reactions. They do not actually want young people to develop any virtues that would give them the strength to resist sexual impulses. Hence they say that nothing has happened to marriage, now that gays are allowed to pretend that they are married. This is rather like saying that there is no noticeable difference in a man whom you have been beating to a bloody pulp, after you kick him in the head to boot. Or that there is no noticeable difference between a corrupted boy who has been ogling porn for five years, now that you have allowed him to be seduced by the next door neighbor. Some maladies take a little bit of time to work through the social system. Others are versions of maladies that the patient is already suffering. The point is that the editors of The Charlotte Flasher do not care one bit about the health of marriage in the United States, just as the person who winks and nods when the boy goes next door does not really care about his attaining a healthy manhood – or he would not have let the boy enter the fever swamps of pornography to begin with.

In all of this, the editors wag their moral fingers, as if they were possessed of deep moral insight. They are the new police of an unforgiving and brutal etiquette based, as racism was, on a deranged view of reality. They have the prudish arrogance of the schoolmarm, without the cleanliness of body and mind: they are whoremarms. But what difficult virtues do they show? They are not going to be those teenage girls with their lockers made porous. They do not have to worry about modesty, purity, and chastity, because they have thrown those virtues overboard. They give up nothing at all. They are the ones helping to run the national whorehouse: they profit by the destruction of public morals.