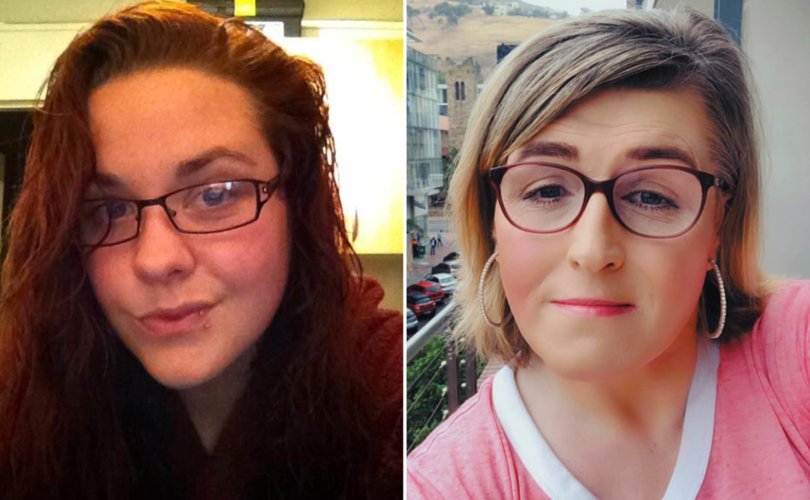 Three police officers showed up at the home of Kate Scottow (left) and detained her for calling trans activist Stephanie Hayden (right) - a biological male - a man.

February 11, 2019 (LifeSiteNews) – Last month, a docker in Northern England was informed by the police in Humberside that he would be the subject of a formal investigation for tweeting out a limerick about transgender people. Several weeks after that, the police in Suffolk contacted a 74-year-old woman, and an officer asked her to stop tweeting comments critical of transgender ideology, and to perhaps consider deleting some of her previous social media posts. And now, the Daily Mail reported over the weekend, it turns out that a 38-year-old mother was arrested in front of her children and locked up in a cell at the police station by the Hertfordshire Police back in December for having an argument with a transgender activist on Twitter.

Kate Scottow’s story is truly chilling. Three police officers showed up at her home and detained her, carting her off to the station and then interrogating her for having an argument with a transgender activist about “deadnaming,” and for referring to a biological man who identifies as a woman as a man. For this supposed offence, Scottow was arrested, photographed, had her DNA and fingerprints taken, and was locked up for seven hours on December 1 of last year. The arrest took place in front of her ten-year-old autistic daughter and 20-month-old son, who is still breastfed. She is still apparently under investigation, and the police have not returned her cell phone or her laptop, which she needs for her ongoing studies pursuing a Masters’ degree in forensic psychology.

Unbelievably, the Hertfordshire Police has not only confirmed to the media that the arrest took place, but has defended their actions, stating that they “take all reports of malicious communication seriously.” The communications the cops are referring to are an argument between Stephanie Hayden, a “transgender woman” and Scottow, who objected to the idea that people could simply self-identify as another gender. Hayden, who is a biological male, claimed that being referred to as a male was “defamatory,” and reported Scottow to the cops. Scottow has been served with a court order that bans her from referring to Hayden as a male. There is no such thing as free speech in England. Transgender activists are using the cops as their own personal militia.

Scottow, of course, denied that she had harassed or defamed Hayden in any way, and pointed that it is a “genuine and reasonable belief” to point out that human beings “cannot practically speaking change sex.” Despite the fact that this is true, Deputy Judge Jason Coppel banned her from referring to Hayden’s “former male identity.” To sum up: A young mother in England was arrested in her home and in front of her children by three police officers and then “detained for seven hours in a cell with no sanitary products,” which she told them she needed, all for highlighting scientific truths that were accepted even by gay rights activists as recently as a decade ago. It is breathtaking to consider how quickly the state has moved to enforce an ideology that is quite literally still being worked out and revised as we speak by trans activists.

The Daily Mail noted that Scottow’s arrest is “the latest where police have been accused of being heavy-handed in dealing with people who go online to debate gender issues” and highlighted the recent instance of sitcom writer Graham Linehan being given a “verbal harassment warning” by the West Yorkshire Police for also “misgendering” and “deadnaming” Hayden. But even that comment assumes that there is an even-handed way for the police to use the force of the law to bully private citizens into getting into line with the latest insanities of transgender activists. Trans activists insisted that men like Dr. Jordan B. Peterson, who warned that trans activists were totalitarian and wanted to control speech, were transphobic liars. But the fact that British cops are entering the homes of young mothers and contacting old ladies to warn them that the state does not approve of their opinions should send a shiver up every spine.

Transgender activists do not possess an internally coherent philosophy that they can defend in public. Science does not confirm a single one of their claims, and that is why they need to use the police to cow ordinary people into calling biological men women and vice versa. They will not be satisfied with simply living their delusions and letting everyone else get on with their lives, because their make-belief world only works when everybody is playing along, and they want men with guns to make sure that all of us do just that. Not only must we all pretend that the emperor is wearing clothes, we must all pretend that he is a woman—even though anyone with eyes to see can see that he is quite obviously a dude.

Listen to an interview with Walt Heyer, a former transgender “woman,” on The Van Maren Show, LifeSite's new weekly podcast. Heyer now speaks out against the dangers transgenderism and sex reassignment surgery. The Van Maren Show is hosted on numerous platforms, including Spotify, SoundCloud, YouTube, iTunes and Google Play. For a full listing of episodes, and to subscribe via various channels, visit our Pippa.io webpage here.