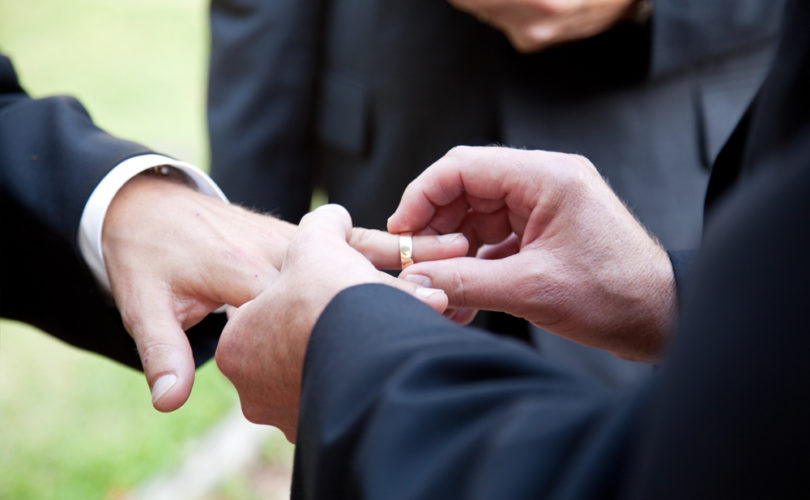 That’s right: Only the non-church-going support ‘gay marriage’ at a higher rate than Catholics. And nearly twice as many Catholics support same-sex marriage as Evangelicals.

What is up with Catholics?

The vast majority of Catholics who support same-sex “marriage” are not gung-ho activists. The opposite is true: They tend toward passivity, seeking to avoid confrontation within their families, neighborhoods, workplaces and schools. They aren’t really supporters, they’re simply afraid to be perceived as being against the odd notion of same-sex “marriage.”

Most would rather sidestep the issue completely and instead either through silence or misdirected empathy lend their weak support for an issue that deep in their gut they know is not right.

They are not waving rainbow flags; they’re waving white flags.

High-profile priests and recently elevated prelates are encouraging acceptance of homosexuality as a valid, non-sinful lifestyle within the Church.

Cardinal Joseph Tobin, C.Ss.R., Archbishop of Newark, New Jersey, personally welcomed homosexuals to the Cathedral Basilica of the Sacred Heart in Newark as part of a so-called “LGBT Pilgrimage.”

Bishop John Stowe of the Diocese of Lexington, Kentucky, spoke to New Ways Ministry, an LGBT group that claims to be Catholic and which has been condemned by the Vatican.

Archbishop Vincenzo Paglia, now at the helm of the Pontifical Academy for Life and the Pontifical Pope John Paul II Institute for Studies on Marriage and Family, paid a homosexual artist to paint a blasphemous homoerotic mural in his cathedral church in 2007. The mural includes an image of the archbishop himself.

Just recently, the Diocese of San Diego announced that Fr. John Dolan, a priest with an LGBT-positive record, has been appointed by the Vatican to be an auxiliary bishop.

Cardinal Blase Cupich, Archbishop of Chicago, has insisted that men and women in homosexual unions can receive communion.

Even the Jesuit chaplain to the U.S. House of Representatives, Patrick J. Conroy, suggests that Church teaching on homosexuality is “outdated,” calling it “a dead end.”  He implies that homosexual “marriage” is the only path to happiness for the same-sex attracted.

In the Archdiocese of Baltimore, St. Matthew’s Parish has been promoting homosexuality and its compatibility with Catholicism for years.

In the Archdiocese of New York, Blessed Sacrament Church’s “Gay Fellowship” group partnered with Lady Gaga’s “Born This Way Foundation” for a fundraising dance in the parish hall.

These are just a few.

With the growing number of members of the hierarchy supporting same-sex “marriage,” it’s no wonder so many Catholics have become either blase to or confused about the issue.

Prelates standing firm to save the same-sex attracted from harm

Not all are jumping on the gay bandwagon. Some are heroically stemming the tide.

Cardinal Sarah, prefect of the Vatican’s Congregation for Divine Worship and the Discipline of the Sacraments, recently delivered a strong rebuke to his fellow priests and bishops, calling attention to the fact that the Church teaches “ … things in the Catechism about homosexuality that some members of the clergy choose not to quote, including the clear warning: ‘under no circumstances can [homosexual acts] be approved’ (CCC 2357). The respect and sensitivity to which the Catechism rightly calls us does not give us permission to deprive men and women who experience SSA (same-sex attraction) of the fullness of the Gospel. To omit the ‘hard sayings’ of Christ and his Church is not charity.”

Last week, Illinois Bishop Thomas Paprocki signed a “Decree Regarding Same-Sex “Marriage” and Related Pastoral Issues.” He said that those in same-sex “marriages” shouldn't present themselves to or be admitted to Holy Communion, nor may they receive a Catholic funeral if they died without showing signs of repentance.

“The Church has not only the authority, but the serious obligation, to affirm its authentic teaching on marriage and to preserve and foster the sacred value of the married state,” Paprocki explained after reminding his flock of “the clear and consistent teaching of the Catholic Church since her founding by Our Lord Jesus Christ.”

More self-identified LGBT people are married to opposite-sex partners than to same-sex partners. Yes, you read that right.

Another recent poll conducted by Gallup found that only 10.8 percent of gays are in gay “marriages,” 13.1 percent of LGBTs are married to a member of the opposite sex.

Two years after the Obergefell (same-sex marriage) ruling, the immutable definition of marriage remains more popular with LGBTs than does the Supreme Court’s invention of gay “marriage.”

Not only that, since the ruling, gays have actually been moving away from cohabitation, with the overall number of couples decreasing precipitously from 20.7 percent pre-Obergefell to 16.8 percent today, and the number of LGBT singles skyrocketed from 47.4 percent to 55.7 percent.

The question remains: Why are so many Catholics supporting “gay marriage” when self-identified gays themselves would rather be married to a member of the opposite sex?