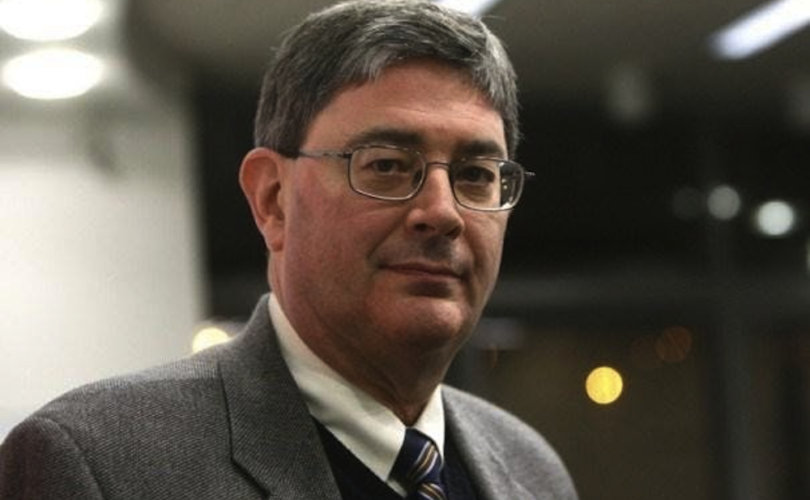 EDINBURGH, Scotland, December 10, 2018 (LifeSiteNews) — Listening to George Weigel speaking in the old cafe at St. Mary’s Cathedral in Edinburgh was like going back 12 years in time.

George Weigel is the principal biographer of Pope John Paul II for the English-speaking world. I first heard him speak at Boston College around 2006. His hair was darker then; my stomach was flatter. Benedict XVI was on the papal throne, and the Catholics of Boston were slowly healing from the 2002 clerical abuse crisis. Then-Cardinal Theodore McCarrick was still off the radar as far as abuse was concerned — at least to the ordinary people of the pews.

It was, relatively speaking, an age of innocence. The expected death of Pope John Paul II had been followed by the reassuring election of Pope Benedict XVI, which seemed then like a promise of stability and a continuation of John Paul II’s call for a New Evangelization. As the leading expert on the legacy of John Paul II, Weigel was clearly a man worth listening to, even if I was the only Ph.D student in the BC Theology Department who went to his talk.

Twelve years later — this past Saturday — I listened to Weigel give a lecture entitled “The Crisis in the Church: How it Happened and What it Means for Us.” He spoke for 45 minutes, and he never mentioned Pope Francis. I don’t think he mentioned Cardinal McCarrick. He certainly didn’t mention the shocking scandals of the Synod on the Family or of Amoris Laetitia. Benedict’s abdication? No. The Dictator Pope? No. “Who am I to judge?” No. Viganó? Again, no.

It was as if we were all back in 2006, and the only crisis, or “rough patch,” as Weigel called it, was caused by the sexual misconduct of priests ordained in the 1960s and 1970s.

“That was the time of dissent in the Church,” said our now silver-haired statesman. According to Weigel, men who had lived lives of “intellectual deception” during the sexual revolution had found it easy to live a form of sexual deception, too.

That’s all very well, I thought, but Cardinal McCarrick was ordained in 1958 by Cardinal Francis Spellman, the sixth archbishop of New York, who is now alleged to have been a sexually active homosexual, too. And he was ordained a priest in 1916.

And that, my friends, was all Weigel had really to say about the “Crisis in the Church and How it Happened.” Worse, for about half an hour he had tried to minimize this crisis by asking his small Edinburgh audience to see it as fallout from “one of the five great transitional moments in the Catholic Church.”

“These transitional moments are times of great turbulence,” he said. “Like all birth processes, it’s messy.”

I found it staggering that anyone would date this “shift” from Leo XIII, not the Second Vatican Council. According to Weigel, Leo XIII’s decisions “created turmoil.” Perhaps, but probably not as much as the “50 years of turbulence” Weigel acknowledged followed from Vatican II, or the moment the homosexuals–and-divorced-and-married Catholics agenda was revealed at the Family Synod.

Weigel said the “turbulence” was caused by  “a culture of dissent.” But he didn’t explain how this culture of dissent came about. Nor did he name names or observe that some of the dissenters are today wearing mitres. Instead, he jumped from 1965 to the election of John Paul II in 1978, who offered “the correct interpretation” of Vatican II and called the Church to the New Evangelization.

This was where we got to the “What it Means for Us” part of the talk. Weigel told us to take responsibility in the crisis by answering our baptismal call as missionary disciples to the world.

“Why don’t you know that date of your baptism?” he asked and suggested we celebrate it every year.

Weigel has elsewhere told Catholics to lay off the hierarchy and concentrate on their own sanctity and role in the New Evangelization. On Saturday, the only living bishop mentioned was Bishop Robert Barron, whose missionary videos we were encouraged to share with others. Barron’s Catholicism was first televised in 2011, so this too fostered the sense that Benedict XVI was still in charge and there is nobody within the Church hindering us from “putting out into the deep” to spread the Gospel.

The lecture began 25 minutes late, and as badly as I wanted to ask Weigel to address the crisis of 2018, not the crisis of 2002, I even more badly wanted to be on time for Edinburgh’s one traditional Latin Mass celebrating the Feast of the Immaculate Conception. So off I went, even before I formulated the question we should all ask Mr. Weigel: What did Pope John Paul II know about Cardinal McCarrick and other powerful clerical abusers, and what did he do about it?

But even that is a question for yesterday. The questions for today have yet to be answered, but I fear they won’t be answered by George Weigel. He seems to be stuck somewhere between 2005 and 2013.