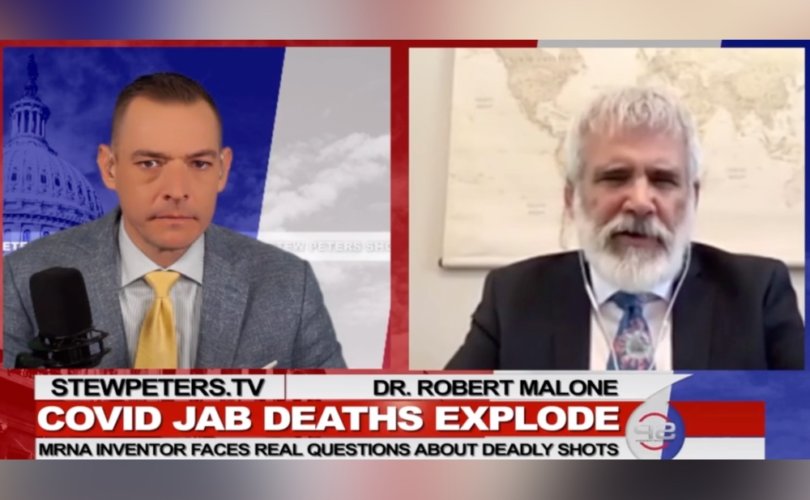 (LifeSiteNews) – Since Dr. Robert Malone, the original inventor of the mRNA technology, was banned by Twitter on December 29, 2021, he has come out stronger against the use of these novel coronavirus vaccines which are proven more and more to be “toxic.”

“The vaccines don’t work and they are toxic,” Dr. Malone told Steve Bannon at the War Room on January 13. In light of the new Omicron variant, this virologist sees the perspectives to be changing.

Dr. Malone had held that mass vaccination and vaccine mandates are wrong, and that the vaccines could only be beneficial for groups of people who are at higher risk, such as the elderly and those with certain preconditions like diabetes. At the same time, Dr. Malone had been posting on his Twitter account reports of increasing numbers of athletes being harmed by the vaccines and reports of other possible side effects of the vaccines.

Then, on December 29, Malone decided to tweet a report by the Canadian Covid Care Alliance, which was entitled: “The Pfizer Inoculations for COVID19 – More Harm Than Good.”  Speaking on January 4 with Stew Peters on his show, the virologist said that his Canadian friends had sent him the “video that got me delisted from the platform from Twitter, which, by the way, is absolutely true.” That is to say, Malone endorses a dire warning against the Pfizer vaccines which maintains that they are doing “more harm than good.”

“As the data come out, it’s clear that we have been misled in terms of the adverse events,” Malone told Steve Bannon on War Room Pandemic, adding that there are certain batches of Moderna vaccines “that are killing a number of people,” yet “our government is completely silent about this.”

When asked by Bannon about the call for vaccinating five- to 11-year-old children, the virologist responded that “this narrative is obsolete, not based in facts, and needs to be flushed. We need not to vaccinate our children. That’s it. These vaccines don’t work and they are toxic.”

Dr. Peter Navarro, on that same show, added that the data show that the vaccines are not protecting against new variants and that even the vaccine producers now admit that the shots merely reduce the symptoms of the illness.

But it might actually be even worse. Speaking on January 10 with Dan Wootton of GB News in Great Britain, Dr. Malone shared the newest data according to which “the vaccinated are at highest risk of Omicron infection.” At some point, he added “there has got to be some accounting.”

“People have to be held accountable for what they have done to us,” he went on to say.

When asked by Wotton whether people who are in the risk groups should still be vaccinated, Dr. Malone responded: “That is an issue that is a little bit on the edge,” explaining that it depends on the data that are being used.

“The problem is: the data are a mess,” he stated, and therefore it is hard to “do a good risk-benefit analysis right now, but there are many credible analyses that suggest that even for those high-risk individuals the number of lives saved by vaccination is exceeded by the number of lives that will be compromised by the vaccines.”

“This is a topic in flux right now,” Malone concluded, “and it presents great difficulty for me because if I maintain my integrity I have to acknowledge that as the data are coming out more and more, it is getting more dicey to vote in favor of any population being administered these genetic vaccines.”

Dr. Malone himself had severe side effects from taking the two Moderna shots. He described his medical history on January 13 on his Substack account:

The first shot was fine. No issues.

The second shot almost did me in. As in I almost died.

After the injection, I had the usual fatigue, muscle-ache and then the palpitations started, as well as shortness of breath. Within a couple days, it got worse – I am not someone who goes to the doctor easily, but luckily for me, I happened to have a routine appointment with my physician. She cuffed me and my systolic blood pressure was through the roof. As she is also a cardiologist, she had more tests run, started me on high blood pressure meds and we got it under control. I kind of feel like I owe her my life. A call out to the fantastic Dr. C. Bove.

He now recommends that people check a new website called “How Bad is My Batch,” because he realized that his second shot came from a batch of vaccines that had a very high mortality rate. “People have the right to be given informed consent of risks and benefits of a medical procedure. Informed consent is not given, if the risks are hidden,” Dr. Malone concluded in his Substack post.

In a January 13 Washington Times article co-authored with Dr. Navarro, Malone therefore argues strongly against any mass vaccination and vaccine mandates, which risk creating a mutation of the virus that could become more lethal than previous coronavirus variants. The vaccines should be given “at best” only to the high-risk groups, they say. The two authors also pointed out the importance of early treatments (such as hydroxychloroquine and ivermectin) that can help avoid severe illness, hospitalization, and death.

“Furthermore,” they added, “the public health threat of the omicron variant is minuscule while our national medicine cabinet contains only a very mixed bag of highly leaky and nondurable quasi-vaccines.” Since these vaccines are leaky and non-durable, pressure is being placed on the population to take repeated booster shots. But they themselves pose a problem.

“With leakiness, vaccinated individuals are becoming infected at increasing rates. With nondurability, the Pied Pipers of forced vaccinations are demanding ever more ‘booster’ jabs,” the authors write. But these vaccines have serious side effects, according to Dr. Malone and Dr. Navarro:

America’s quasi-vaccines are significantly riskier than public health officials have disclosed. They can trigger serious cardiac and thrombotic conditions, menstrual cycle disruptions, Bell’s palsy, Guillain-Barre syndrome and anaphylaxis. Male children appear particularly prone to myocarditis, while, post-vaccination, individuals may have suppressed immunities that make them vulnerable to other diseases.

In the January 13 Bannon War Room show, Dr. Navarro pointed out that the European Medicines Agency now says that these “quasi-vaccines can permanently compromise people’s immune systems,” in Navarro’s words. The European Medicines Agency was warning against repeated booster shots. “When you take this quasi-vaccine for a period of time,” Navarro explained, “your immune system goes down and you are prone to other things that can kill you.”

When speaking on January 4 with Stew Peters on his show, Dr. Malone also further expounded on the dangers of the vaccines. “It is a huge number of deaths and adverse events that are directly linked to these vaccines. But we’ve known for a long time that the truth would come out.”

Dr. Malone added that there are analyses out there – for example by Dr. Steve Kirsch – that claim that the death rates of the vaccines are up to 40 times higher than what is being reported on the U.S. government’s Vaccine Adverse Event Reporting System (VAERS).

When asked as to which age groups should take the vaccine, Dr. Malone again pointed out the “hot mess” with the current data. For example, many reported coronavirus deaths were of people who died of other illnesses but “with” the virus, since the government pays hospitals higher rates for treating coronavirus patients.

Taking these facts in, and making careful calculations, Dr. Malone concluded: “And so if you apply these various multiplication factors, twenty four to forty three fold anywhere in there and you run the risk benefit analysis, you end up all the way from birth to death to 80 years old, showing that the risk benefit analysis is such that you will have more morbidity and mortality associated with the jab than you have from the disease.”

“There is no justification in any age cohort for the genetic vaccines, that is what I see in the data,” the virologist explained.

LifeSite reached out to Dr. Malone with regard to his position and comments on the vaccines and the dangers stemming from them. He answered:

What I have said is that my longstanding position is to reserve the vaccines for the high risk persons. I am now saying that the data are in flux and I may soon need to change this position to not recommending the vaccines for anyone. This is in part driven by the modest risk associated with Omicron and the growing evidence of significant in all age groups, as well as the lack of efficacy and emerging evidence that the vaccines may increase risk of infection with Omicron.