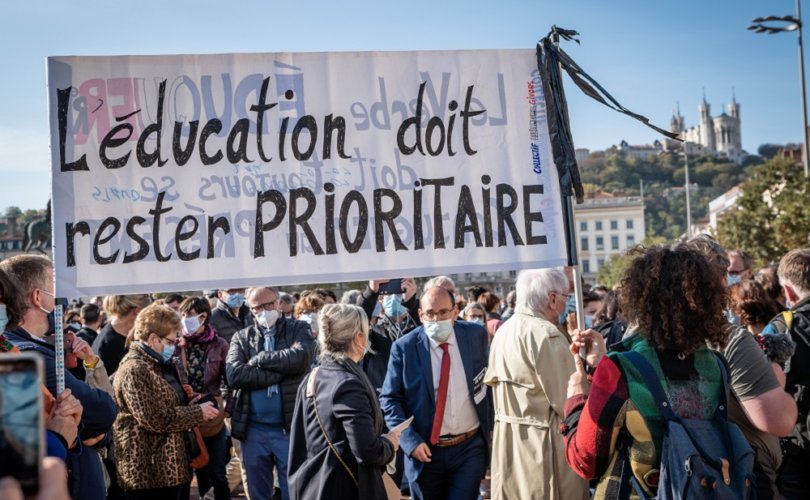 'Education must come first' — protest against the beheading of Samuel Paty.ventdusud / Shutterstock.com

October 20, 2020 (LifeSiteNews) — A 47-year-old history professor at a junior high school in an ethnic suburb near Paris was decapitated in the street by a Muslim youth at 5 P.M. on Friday afternoon for having shown his class a caricature of the “Prophet” Mohammed. Samuel Paty, father of one, was horribly assaulted by the 18-year-old Abdoullakh Anzorov, a Chechen refugee born in Moscow, who used a butcher’s knife to behead the teacher in the town of Conflans-Sainte-Honorine. The assassin remained near the body and is believed to have uploaded a photo of the victim’s head to his Twitter account together with a caption threatening French president Emmanuel Macron, “leader of the infidels.”

Passersby called the police, who rapidly arrived on the scene and gave chase to Anzorov, cornering him in the neighboring town of Eragny, where the suspect threatened them with an Airsoft gun with plastic pellets. When he started shooting and running towards them despite having been repeatedly ordered to let go of his weapon and get down, the police shot ten times, killing him on the spot. He was also carrying a dagger.

The horrific decapitation of Samuel Paty set off a wave of indignation, especially because the victim was a history professor in the public school system that is considered to be a symbol of the French Republic. Since the late 19th century, teachers, known back then as the “black hussars of the Republic,” in opposition to the Catholic clergy, have been tasked with transmitting the secularist values of a regime that was born of its fight against Catholic dogma, beliefs, and religion.

As coincidence would have it, the crime occurred on the anniversary of the beheading of Queen Marie-Antoinette of France, who was guillotined on October 16, 1793, after a summary trial that took place the day before.

Friday’s crime was immediately qualified as “Islamist terrorism” and condemned as such by the French authorities, in particular by President Macron, who rushed to the scene to make a public statement. He declared:

One of our fellow citizens has been murdered because he was teaching: teaching his students the freedom of expression, to believe or not to believe. Our compatriot was the victim of a characterized Islamist terrorist attack. … I want to say tonight to all the teachers of France that we are with them, that the entire nation will be there, at their side, today and also tomorrow, to protect them, to defend them, to allow them to do their job, which is the most beautiful job there is: to make free citizens.

This is no coincidence. If this evening, this terrorist killed a teacher, it is because he wanted to kill the Republic in its values, the Enlightenment, the possibility of turning our children, wherever they come from, whether they believe or do not believe, whatever their religion, into free citizens. This fight is ours, and it is existential. …

I want to make it very clear tonight: they shall not pass. Our police force, our gendarmes, all of our internal security forces, our intelligence forces, but beyond that, all those who hold up the Republic and at their side magistrates, elected officials, teachers, all men and all women, we will stand together. They shall not pass. Obscurantism and the violence that accompanies it shall not win. They will not divide us. This is what they seek and we must stand together.

To French ears, the words “they shall not pass” resonate with the words that marked the opposition of the revolutionary Spanish Republicans during the Civil War in 1936–1939 to the nationalist forces led by Francisco Franco. During that war, about 45,000 priests and religious, including 13 bishops, were massacred by the “Red” forces. Some 2,000 of them have been beatified as martyrs.

Macron’s speech made it clear that he considers the crime particularly heinous because of its symbolic attack against religious freedom, which is increasingly construed by the French authorities as being epitomized in the “right to blaspheme.”

The Islamic attack on a middle school teacher is one more shocking occurrence of the power of radicalized Muslims, who are more and more numerous on French soil. Since the 1970s, politically uncontrolled Islamic immigration has been backed by the authorities in power, both left- and right-wing, and accompanied by hate crime legislation that penalizes “discrimination” and “racism” linked to a person’s religion. Until recently, cases of teachers  criticizing Islam or presenting its history in a “negative” manner in the classroom have been officially condemned, and a number of teachers have been fired for that reason.

— Article continues below Petition —
PETITION: Urge Governor DeSantis to give parents freedom in school choice
Show Petition Text
1114 have signed the petition.
Let's get to 2500!
Thank you for signing this petition!
Add your signature:
Show Petition Text

Waves of “refugees” have entered France, in a trend that took a sharp upward turn in 2015 with the arrival of thousands of African and Oriental refugees, mostly young men.

Abdoullakh Anzarov entered France earlier with his family some ten years ago. His father was asking for asylum because he claimed to be in danger in his own country — Chechnya, which is part of Russia — for having given shelter to several Chechen guerrillas in 2004. Poland had already rejected the family’s request. The father’s demand was in turn rejected by the French authorities. Their decision was overturned in 2011 by the special court for asylum right, and the French administration was ordered to allow the family to stay as refugees. A search of Abdoullakh’s body revealed a ten-year residence permit delivered to him upon his majority last March. The youth was “known to the police” for several misdeeds including damage to public property and group violence while still a minor. He had never been convicted.

Alongside the grave political problem underscored by Anzarov’s legal presence in France, which gave him the opportunity to commit a barbaric assault on a public school teacher, this case also reveals the secularist sectarianism that is deeply engrained in the “republican” mindset. Macron made that clear earlier this month, when he announced that in the fight against “separatism” — read: Islamic radicalism — he intends to ban homeschooling in 2021 because schools are “the republican melting pot.” He added: “It’s what makes it possible for us to protect our children in a complete way from any religious sign, from religion.”

What happened in the Bois d’Aulnay middle school in Conflans-Sainte-Honorine at the beginning of the month, which would lead to the death of Samuel Paty, makes clear what this means and requires some thought.

As he had already done in previous years, but probably in a more aggressive fashion this time, Paty wanted to show his 8th-grade 13 year-old students the meaning of “freedom of expression” by showing them a caricature of the “Prophet Mohammed,” as republished recently by Charlie Hebdo, the satirical Trotskyist and often obscene magazine that lost eight of its journalists and cartoonists in January 2015 in a bloody Islamic terrorist attack that killed 11.

According to accounts by students in his class, Paty asked who was Muslim and invited those who said they were to leave the room, as he was going to show a drawing that would hurt their feelings. Some refused to leave but were indeed shocked to be shown an intensely vulgar 2012 caricature from Charlie portraying Mohammed, naked, squatting on all fours and seen from behind with his genitals showing, with a star on his anus and the words: “A star is born.”

This was not rational, or even rationalistic, criticism of a religion, but an attack, coupled with explicit images completely out of place in a class of young teenagers by any standards.

Several Muslim parents complained to the principal of the school, asking for the professor to be fired, but Paty received full support from his hierarchy. In his statement, Macron went out of his way to thank and congratulate the school’s head for having unwaveringly backed her teacher, thus making it clear that the right to blaspheme is, in his eyes, a vital element of “republican values.”

A few days later, the father of a 13-year-old girl who was in Paty’s class (or in another class in the same school; this point is not clear) posted a video on social media asking for support from the Muslim community to oust the teacher, who for his part told his colleagues he was worried about the situation.

His assassin, who came from another town, appears to have received information from families within the school about the teacher’s habits; he is said to have asked pupils to identify the man on Friday afternoon before committing his crime.

As things are developing now, the assassination of Samuel Paty threatens to lead to a public narrative that might require teachers to uphold the right to “caricature” religion in their classes. This Saturday, education minister Jean-Michel Blanquer congratulated the principal who supported Paty’s choice to show the drawing: “A professor has every right to show these caricatures, all the more when this is accompanied by pedagogical work. … Parents must always show solidarity with the Republic. Parents must participate and teachers must be respected by parents and the whole of society.”

Right now, the AGRIF (Alliance against racism and for the respect of French and Christian identity) has a lawsuit pending before the courts for a disgusting drawing of Our Lord on the Cross with obscene and pornographic details added to His suffering Face. Catholics must realize that what Mr. Blanquer said will apply to them as well if, in the future, a teacher shows a class of 13-year-olds an obscene caricature of Christ or the Virgin Mary.