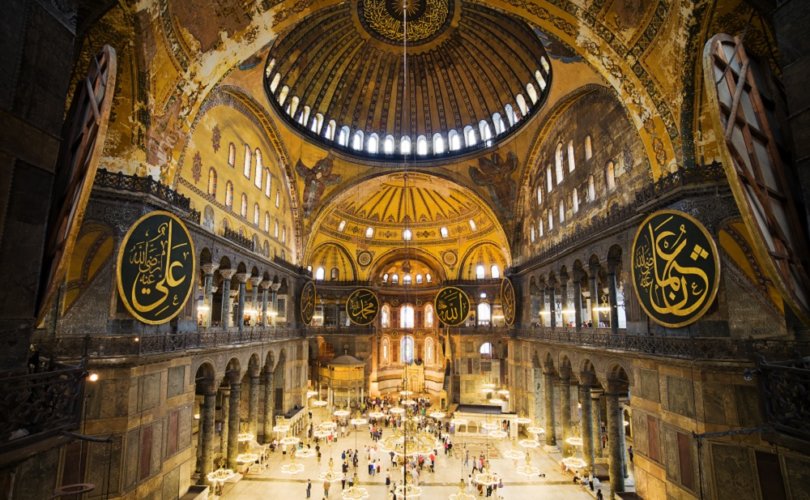 Interior of Hagia Sophia with its islamic decor.Artur Bogacki / Shutterstock.com

July 27, 2020 (LifeSiteNews) — Headed by Turkish president Recep Tayyip Erdoğan, Muslims entered the Basilica of Hagia Sophia in Istanbul on July 24 for the first Islamic Friday prayers since the Byzantine basilica was turned into a museum 86 years ago. “Ayasofya,” as it is known in Turkish, was formerly a Christian basilica, with important parts of the building dating back to the 6th century. They entered as conquerors: the “sword of conquest” played an important and visible role in a ceremony, and the verses of the Quran chosen for the event were clearly anti-Christian.

The lengthy Islamic occupation of Hagia Sophia began violently on the day of the capture of Constantinople in 1453 by Islamic invaders, who immediately turned it into a mosque. Holy Wisdom has now “regained” that status, the mainstream press reports, despite its true status as a church, one of the most venerable in Christendom, where the Triune God was adored and the Divine Liturgy offered for many centuries.

Hagia Sophia was “recaptured” last Friday by a crowd of dignitaries, led by Erdoğan, who is himself capable of reciting the Quran in Arabic psalmody, and who did so last Friday, chanting the first surah. Thousands of faithful followed and joined the prayers from around the building, in five separate zones, three for men, two for women.

The event took place only two weeks after the Turkish Council of State ruled that the 1934 decree that turned Hagia Sophia into a museum (under the secularist and masonic rule of Mustafa Kemal Atatürk) was illegal because the building was the property of the Sultan Mehmet Han Foundation.

President Erdoğan, of the ruling Islamist party, immediately decided to go ahead and organize prayers as soon as possible.

The event was marked by a strong anti-Christian sentiment. Imam Ali Erbaş, head of Turkey’s Religious Affairs Directorate (Diyanet), went up to the midram to give his sermon with the “sword of conquest” in his hand: a Turkish scimitar whose blade was inscribed with the “conquest surah.”

According to the Turkish English-language news site dailysabah.com, “Turkey's religious chief on Friday explained that swords were traditionally held during religious sermons delivered at weekly Muslim prayers as a symbol of conquest.”

Ali Erbaş said during a press conference: “Khutbahs (Friday sermons) have been delivered with a sword, without interruption, for 481 years. If Allah permits, we will resume this tradition from now on.” “This is a tradition in mosques that are the symbol of conquests,” he explained, adding that Hagia Sophia is such a symbol. Erbaş said he hoped “many people” would pray in “this mosque” and “learn their religion” there.

“We’ll try to restore the Hagia Sophia Madrassa to function as it did during its magnificent years with Quran lessons in every single corner of the mosque. … Mosques also function as schools. Just as our prophet was able to raise his companions in mosques, we are trying to raise our youth and children in mosques.”

A number of further surahs were chanted by “Hafizs” (those who know the Quran by heart), including Erbaş, as announced by the official government site of the Diyanet. They recited Surah al-Kahf, Surah Maryam, Surah Ya-sin, and Surah al-Fatiha, as well as three of the shortest surahs, al-Ikhlas, al-Falaq, and an-Nas.

This is worth analyzing. All the English translations of these surahs can easily be found on the internet.

The surah al-Kahf (“The Cave”) ends with the words of Mohammed: “Say, ‘I am only a human being like you, being inspired that your god is One God. Whoever hopes to meet his Lord, let him work righteousness, and never associate anyone with the service of his Lord.’”

The condemnation of the “associators” is a direct charge against Christians who believe in one God in three Persons.

Surah Maryam tells of the birth of John the Baptist, vaguely following the biblical account, and the “annunciation” by the angel Gibril to “Maryam” of the (more or less) virginal birth of her son. A convert from Islam, Moh-Christophe Bilek, who founded the “Our Lady of Kabylia” association in France, has given many talks showing that the “Maryam and Issa” of Islam do not in fact correspond with the Mary and Jesus of the Gospel but appear at a different time in the corresponding Bible timeline.

In the surah, the assent of the woman, Maryam, is not required. Mary’s “fiat” does not exist in the Quran:

21. He said, “Thus said your Lord, ‘It is easy for Me, and We will make him a sign for humanity, and a mercy from Us. It is a matter already decided.’”

22. So she became with child, and went away with him to a far place.

Further on in the surah, Maryam says:

37. But the various factions differed among themselves. So woe to those who disbelieve from the scene of a tremendous Day.

85. On the Day when We will gather the righteous to the Most Merciful, as guests.

86. And herd the sinners into hell, like animals to water.

87. They will have no power of intercession, except for someone who has an agreement with the Most Merciful.

88. And they say, “The Most Merciful has begotten a son.”

89. You have come up with something monstrous.

90. At which the heavens almost rupture, and the earth splits, and the mountains fall and crumble.

91. Because they attribute a son to the Most Merciful.

92. It is not fitting for the Most Merciful to have a son.

This is a clear charge against the Christian faith that professes the Most Holy Trinity, God the Father, God the Son, and God the Holy Spirit, three equal Persons in one God.

Surah Ya-Seen followed. It promises hellfire to those who do not follow Allah’s messengers.

Surah Ikhlas followed. It is short:

3. He begets not, nor was He begotten.

4. And there is none comparable to Him.”

This is once again an attack against the Son of God and the Holy Spirit.

1. Say, “I take refuge with the Lord of Daybreak.

2. From the evil of what He created.

3. And from the evil of the darkness as it gathers.

4. And from the evil of those who practice sorcery.

5. And from the evil of an envious when he envies.”

4. From the evil of the sneaky whisperer.

5. Who whispers into the hearts of people.

6. From among jinn and among people.”

The choice of surah is obviously quite contrary to interreligious dialogue. Above all, it is a loud, explicit rejection of Christian faith and worship. It is not so much a prayer as a precise message addressed to the Christian believers who used to worship the Triune God in Hagia Sophia and venerate His Most Blessed Mother.

As will be the case during all prayers recited at the “Holy Wisdom Mosque,” the mosaics depicting Our Lord and His Most Holy Mother have been veiled. Two green flags adorn the midram, under the Arabic islamic inscriptions that have remained in Hagia Sophia even since 1934.