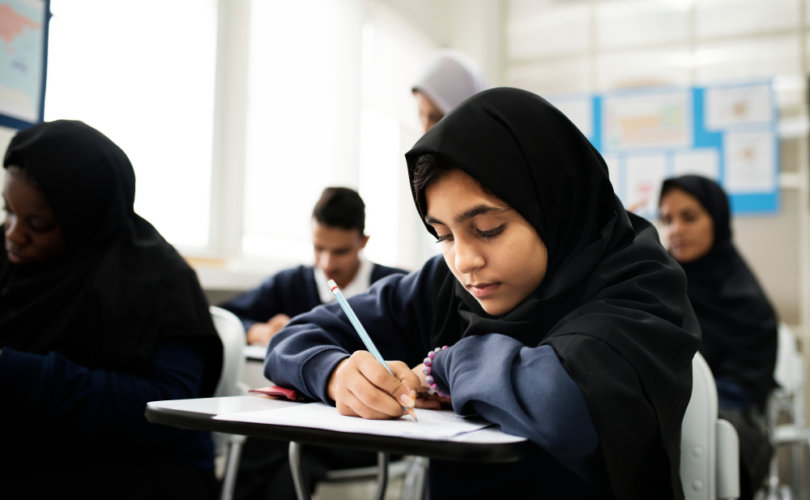 March 7, 2019 (LifeSiteNews) – Progressives in the United Kingdom are learning the first of what may be a series of uncomfortable lessons: Not all of the immigrants they champion share their values. In Birmingham, The Guardian reported this week, a programme to teach British primary school children about LGBT issues at Parkfield community school was shut down after 600 students were withdrawn by parents angry that their children were being “brainwashed” by lessons that were undermining their parental rights and “aggressively promoting homosexuality.” The vast majority of the parents were Muslim, although the school refused to confirm the precise number of children that were pulled.

Assistant Head Andrew Moffat, who is in a gay civil partnership, was accused by parents of attempting to promote his own personal views on LGBT issues to children via the “No Outsiders” programme. Children between the ages of four and eleven were read books such as Mommy, Mama, and Me as well as King & King, stories that showcase same-sex relationships. Fatima Shah, the mother who first raised her concerns with the curriculum, pulled her 10-year-old daughter out and noted that children of such a young age were simply not ready to be taught about LGBT issues.

“We are not a bunch of homophobic mothers,” Shah stated. “We just feel that some of these lessons are inappropriate. Some of the themes being discussed are very adult and complex and the children are getting confused.” Not mentioned, of course, was the fact that the children would specifically be confused by the fact that the school would be trying to teach the children something very different about LGBT issues than the parents would—and that essentially, this would boil down to a competition between the educators and the parents over the moral values of the children. This sub-text is known to everyone but rarely mentioned, as it reveals the uncomfortable and unbridgeable divide between conservative parents and left-wing educators.

The mother of a four-year-old who attends Parkfield, Mariam Ahmed, stated that in her view, “What they are teaching is not right, they are too young. There are nine parts of the Act [programme] and they only seem to be focussing on one, homosexuality, and that is wrong. It’s not just because we are Muslims, there are Christians too.” A father, Abdul Ma, said that in his view, “This is a brainwash. We bring our children here so they can later work as a solicitor or a teacher, not to be taught about being gay or lesbian.” Razina Mahmood concurred that “This is nothing but the indoctrination of our children.”

In response to these criticisms—and 600 children getting pulled from the school—Parkfield has put its “No Outsiders” programme on hold, but the issues are unlikely to go away as they are simply planning to limit the lessons to “equality assemblies” and promising to consult parents before reintroducing them, but it is difficult to see how parents and educators can agree with the moral chasm that divides their worldviews. In fact, the Government is currently planning to introduce compulsory new education on relationships, which is likely to include LGBT issues as part of the curriculum.

Chief Inspector of Ofsted Amanda Spielman, who is in charge of the region of Birmingham, has attacked the parents for pushing back, stating bluntly that “The essence of democracy is we don’t always get our way” and that it is “vital” that children be taught about LGBT families. There may be some concern that such protests could become a growing trend: In 2018, 110 children were pulled from a school in London for a day of LGBT pride, and staff at the Heavers Primary School in Croyden found themselves under fire from parents when they attempted to hold a Pride parade. The parents, again, stated that their children were too young to be taught about such issues, while headteacher Susan Papas, who apparently forgot that the children were not hers, stated that she did not need to “seek consent from the parents.”

Right across the West, parental rights is emerging as one of the defining issues of our time. Who gets to inform the moral worldviews of children: Parents? Or government employees? As I’ve written before, that question will be determined largely by how willing parents are to stay involved and push back. The case of Parkfield community school highlights the fact that when parents push back, educators can be forced to back down. This is genuinely a war for the hearts and minds of children over key issues of morality, biological reality, and the nature of gender and family.

If parents decline to fight, the outcome is predetermined, and their values will die with them.

Jonathon’s new podcast, The Van Maren Show, is dedicated to telling the stories of the pro-life and pro-family movement. In his latest episode, he interviews the “Godfather” of the US pro-life movement Joe Scheidler. 91-year-old Scheidler says that it was during a speech he attended by Senator Henry Hyde in Chicago in the early 1970s that he became interested in the pro-life fight. “I listened very carefully to Henry's talk and then I started studying the whole pro-life issue of fetal development,” he says. “I thought this was going to destroy our country because we are taking protection away from the most helpless — the unborn.” You can subscribe here, and listen to the episode below: