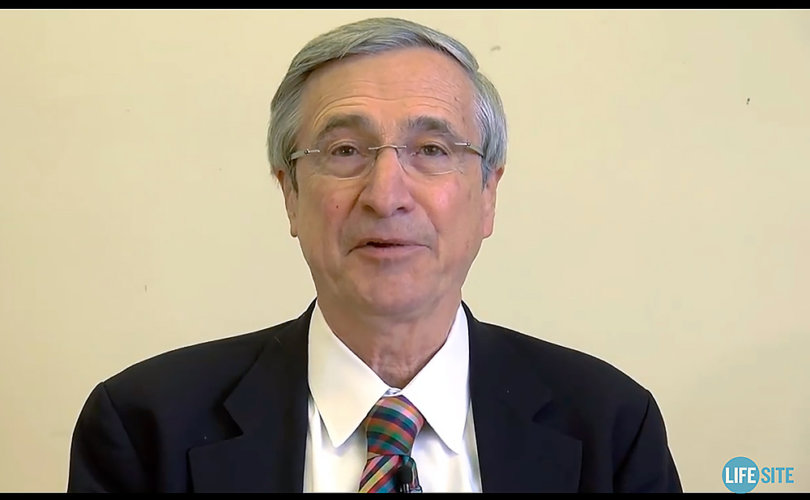 November 30, 2018 (LifeSiteNews) –Five years ago I was privileged to conduct a fast-paced, 9-minute video interview with renowned Boston College professor and prolific author, Peter Kreeft. It was an amazing interview, with the professor quickly responding to each of the 11 questions with profound insights. I was impressed that, not at all knowing beforehand what I was going to ask him, he came back each time with what seemed to be the best possible answer to challenging questions on difficult subjects.

There have been massive developments on the two issues that were the subject of the questions since the time of the interview. Few could have predicted that things could have gone as far as they have in so short a period of time – but Peter Kreeft warned us.

John-Henry Westen wrote the article below on the interview, BUT, I would strongly suggest watching the video to obtain the best understanding and impact of the interview. It is even more relevant now than it was in 2013.

Why the simultaneous rise of homosexuality and Islam? An interview with Peter Kreeft

In a recent interview with LifeSiteNews.com co-founder Steve Jalsevac, famed Catholic philosopher and Boston College professor Peter Kreeft noted key similarities in the homosexual activist movement and radical Islam which have led to their ascendency in recent times.

Asked about the simultaneous rise of militant Islam and the homosexual activist movement despite their opposing ideologies, Kreeft replied: “They’re the only two movements in Western civilization that will fight and die for their beliefs.”

“It is an amazing paradox that they’re opposites in almost every way, and yet they’re similar in that they will still fight,” added Kreeft. “Christians are supposed to fight too, the notion of spiritual warfare, the true meaning of jihad – a war against sin rather than flesh and blood. This is central to Christianity and we’ve lost it, and therefore opposite forces are entering the vacuum.”

Kreeft explained that as the Christian faith has weakened in the West, it has caused a vacuum.

“Well, in Western civilization, at least, there is certainly a moral and religious decline…we’re losing the faith. Europe is already almost lost,” he said. “Nature abhors a vacuum, spiritually as well as physically. So when the Faith weakens, another faith enters, because no one can live without faith, and Islam is a very strong faith. It has its good points; it has its bad points. But when we withdraw from the battlefield, someone else enters. It’s as simple as that.”

Asked specifically about the reason for the rise of the homosexual activist movement, Dr. Kreeft replied:

Because we became sheep. We said, “Abuse us. We’re polite. We’ll smile at you. We are tolerant of everything.” When people are that way, someone who has principles, bad or good, enters. We so worship equality that we are afraid to be different, to be distinctive, to have a distinctive message. And equality is a good defensive weapon, but it has no offense in it. We need equal rights to protect ourselves, but we need something much deeper than equality: We need distinctiveness, we need identity. And if we abandon that, others will come in and take over.

Kreeft stressed however, that in confronting homosexuality Christians are being loving, in the truest definition of the word.

“Love fights. Love cares. Love discriminates. And therefore there is in Scripture, very clearly, a thing called the ‘wrath of God’. God hates all enemies of love as the doctor hates the cancer that’s killing his beloved patient. If you really love a human being you will hate all the dehumanizing forces that are harmful to that human being,” he said.

How can Christianity experience a renewal in North America and Europe?  Kreeft answered in his characteristic rapid fire style stating simply: “It must recapture its essence, its identity. It must return to Jesus it must do what Vatican II did – go back to the sources and plant the roots in the only possible foundation.”

Peter Kreeft, Ph.D., is a professor of philosophy at Boston College and at the King's College (Empire State Building), in New York City. He is a regular contributor to several Christian publications, is in wide demand as a speaker at conferences, and is the author of over 67 books including:
Handbook of Christian Apologetics
Christianity for Modern Pagans
Fundamentals of the Faith

1
Radio host injured by COVID jab says media ‘don’t want to hear’ about adverse events
2
Here’s why I regret paying off my student loans
3
Abp. Viganò: Pope Francis has displayed ‘unequalled duplicity’ in his treatment of Cardinal Zen
4
With Roe v. Wade in the balance, Supreme Court announces next round of rulings coming Monday
5
Bishops silent as Catholic land worth $208 million earmarked for abortions in Ireland
Subscribe to Daily Headlines »