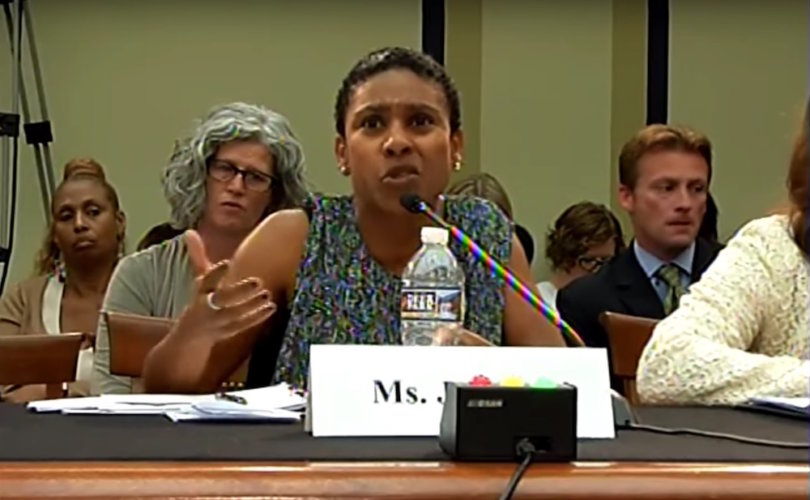 WASHINGTON, D.C., September 23, 2016 (LifeSiteNews) – In case you needed proof that God still intervenes in the affairs of men, you need to watch this video.

Kierra Johnson, the executive director of United for Reproductive and Gender Equity (URGE), was called to testify before Congress in favor of taxpayer-funded abortion-on-demand. But after another witness spoke about Jesus, she mysteriously got confused and repeatedly praised a pro-life law and endorsed a pro-life argument.

Johnson seemed upset that pro-life speakers had likened abortion to slavery during a Congressional hearing on babies born alive during botched abortions and the Hyde Amendment on Friday morning. She decided to say that not paying for abortions is akin to slavery.

But this is what came out.

“When you get to decide for [people] whether or not their body has value, you own them,” said Johnson. (It's worth comparing her speech to Sen. James Lankford's heartfelt plea about the value of the unborn on the Senate floor last year.)

But she wasn't finished yet. Johnson then began praising the Hyde Amendment, the 40-year-old law that prevents U.S. taxpayers from paying for most abortions, the very bill she came to denounce.

Note the looks of confusion and concern on the faces of Johnson’s friends and compatriots as their star witness begins extolling the enemy’s legislation.

Johnson’s slip-up is all the more significant because it came, not during a hostile cross-examination, but in response to a question from a friendly congressman, Rep. John Conyers of Michigan.

Conyers quickly moved to save her from her divinely imposed disaster, asking, “You think we should consider repealing the Hyde Amendment?”

“Yes,” she said, smiling broadly and laughing in realization of what she had done. “We should repeal the Hyde Amendment.”

Her “mistake” came just after Gianna Jessen – the remarkable young woman who sat next to me during the 2016 pro-life panel at CPAC – invoked the words of Jesus and the power of self-sacrificing love. She had just directly addressed Johnson’s supporters, who had whooped and hollared Johnson’s calls that Congress should fund abortion.

“If need be, I would lay my life down for you,” she said, quoting Jesus’ statement that there is no greater love than to lay down one’s life for another. “As I listen to you applaud for death, I want you to tell you how valuable you are.”

After invoking Christ, is it really a coincidence that Johnson inadvertently spoke the truth? The Psalmist once prayed, “Lord, confuse the wicked, confound their words” (Psalm 55:9).

God, the God of life, is still working miracles.