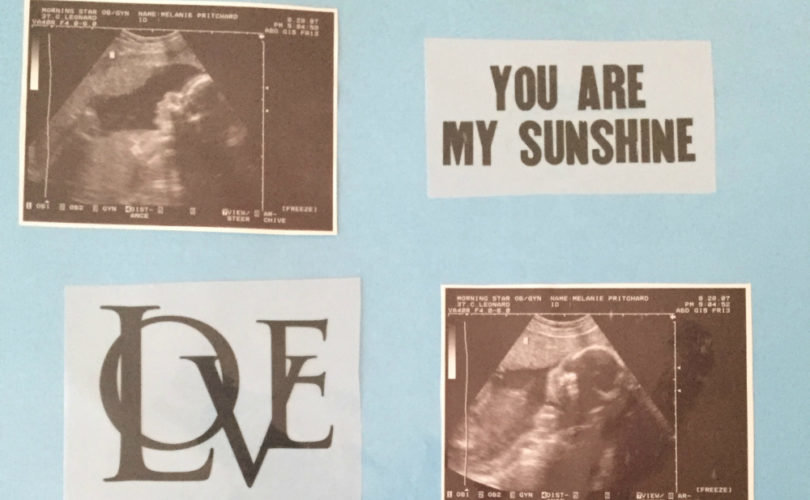 I came into my seven-year-old son’s room and discovered his dangerous approach to reaching something on a high shelf. He had placed a stool next to a taller wobbly stool to build a ladder to reach an item that caught his eye. When I came in, I asked what he was trying to get and he pointed to a baby blue photo album. He said, “Mom, what is that?” I pulled the oversized book down. For years I dreamt of how this conversation would go and what it would be like to share what is in that photo album with him. I wasn’t sure when he would be at the right age, so it has sat on that shelf for many years. Now was as good a time as any. He was curious.

Priceless. I never could have imagined when I first started those letters that this would be his response. It was a moment to remember.

Rewind to before I was married. I came up with an idea that I hoped, if used with my own children, would leave no doubt that they were loved every minute of their lives and also see the incredible beauty that lies within the womb, the beauty that is human life. Before I even had children, I was thinking of strategies to help them have a deep-rooted respect and appreciation for human life at all stages.

We went to Maui for our honeymoon and brought back the greatest gift, a newly conceived child. My husband Doug always shares with people that he never knew his wife as solely a wife, but always a mother too, right from the start. Upon finding out we were expecting, I began to put the wheels in motion for how I would demonstrate and teach my children about the dignity of life.  The photo album would become the vehicle by which I would do this.

I took pictures all the way through my pregnancy detailing the growth of my belly. I also kept all the ultrasound images and placed the photos and ultrasound images in the album my son had found. Many women do that, but this book contains something extra special. My husband and I took turns writing our children a letter every month they were in the womb, which accompanied the pictures.

In month one, we wrote two letters addressed, “Dear Baby.” The first one I wrote shared the details of the excitement we felt when we found out I was pregnant. I ended the letter by writing to my unborn child, “We are getting ready for bed and we are still excited, yet nervous and a little scared of what’s ahead, but we trust in the Lord.”

My husband wrote the next letter, where he told our son about all the people we let know about our exciting news and their beautiful responses. One friend said, referencing the fact that we were pregnant after being married a few weeks, “God must have a lot of trust in you both.” These were words that comforted us in our new-found parenthood. I had forgotten he said that until I read the letters again recently.

Every month we detailed the way I felt as our baby grew, along with how he was being formed; like when we heard his heart beat for the first time, and when I felt his first kick, or experienced his first hiccups. We included Scripture verses from Genesis and Psalm 139: “God is forming you in his image and likeness. He is knitting you in my womb and wonderfully and fearfully making you.”

We poured our love on those handwritten pages.

When I pulled the photo album down off the shelf, my son and I opened it. He requested I read each letter, but we had somewhere to be, so I told him we would have to do it later. Time passed and we forgot to look at the album again, so it sat on his floor.

The next day, I sent him to his room to discipline him for something. He found his album and looked through the pictures during his quiet time in there. When he came back out of his room, he brought the album and showed his dad and excitedly asked Doug to read the letters. I was in the other room attending to Ella and nearly stopped them from going through book since I wanted to be a part of this special moment. Instead, I heard Doug begin to read the words written on those pages and I decided this could just be a special moment between father and son.

Time had passed, and I was in another room and my mind was on something else. Brady, my son, came to find me. He had this endearing smile on his face and threw himself at me and hugged me big. He said, “You’re the best mom ever.” Because my mind was on to something else, I had to stop and think why he was saying this. The last encounter I had with him was sending him to his room, so I had to think hard, asking myself, “What inspired him to be so kind?”

Then I remembered his father reading him the letters. I said, “Did you like the album we made for you?” He replied with the most heartfelt statement of joy and belief: “You loved me before I was born.” He smiled from ear to ear. I replied holding back tears, “Oh yes son, you were loved every second of your life from the moment of your conception.”

Priceless. I never could have imagined when I first started those letters that this would be his response. It was a moment to remember. Now that he has the book, it will always be a reminder to him about how special he was from the moment he was conceived and every month thereafter. It will also be a personal book we use to show him the evidence of the humanity of the unborn using his own ultrasounds and 4D ultrasound imaging. We hope this will sit deep in his heart and that he will also become a defender of the unborn and he too will fight for the dignity all children deserve.

I share this in hopes it will give new parents a powerful idea for how to one day help their own children discover and value life at all stages through their child’s own personal encounter with their life story.