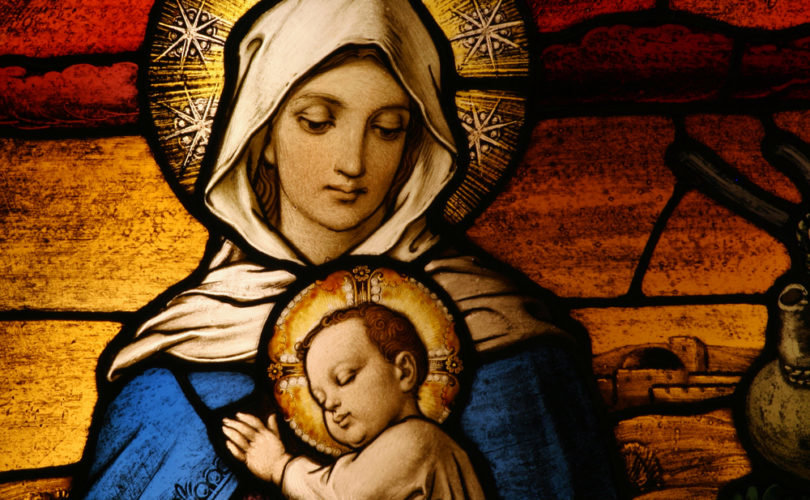 December 19, 2017 (LifeSiteNews) – The Magnificat—the Virgin Mary’s hymn of praise to God for the salvation He is going to accomplish through the Redeemer in her womb—is one of the most glorious psalms of Sacred Scripture. St. Francis de Sales goes so far as to say: “The most holy Virgin … intoned that beautiful and wonderful canticle, the Magnificat, a canticle surpassing all those which had been sung by other women … or any others of which Scripture makes mention.” In words of exalted beauty and fervor, it summarizes the history of our salvation, the promise of redemption of Israel from captivity.

My soul magnifies the Lord, and my spirit rejoices in God, my Savior,

for he has regarded the low estate of his handmaiden.

For behold, henceforth all generations will call me blessed;

for he who is mighty has done great things for me, and holy is his name.

And his mercy is on those who fear him, from generation to generation.

He has shown strength with his arm,

he has scattered the proud in the imagination of their hearts,

he has put down the mighty from their thrones, and exalted those of low degree.

He has filled the hungry with good things, and the rich he has sent empty away.

He has helped his servant Israel, in remembrance of his mercy,

The Magnificat is the oldest Advent hymn. It is at once the most passionate, the wildest, and one might even say, the most revolutionary Advent hymn ever sung. This is not the gentle, tender, dreamy Mary whom we sometimes see in paintings; this is the passionate, surrendered, proud, enthusiastic Mary who speaks out here. This song has none of the sweet, nostalgic, or even playful tones of some of our Christmas carols. It is, instead, a hard, strong, inexorable song about collapsing thrones and humbled lords of this world, about the power of God and the powerlessness of mankind. There are the tones of the women prophets of the Old Testament that now come to life in Mary’s mouth. (Dietrich Bonhoeffer, The Mystery of Holy Night [New York: Crossroad, 1996], 6)

In her Magnificat, Our Lady, the “woman of attentive silence” (John Paul II), speaks at greater length than in any other place recorded by the Evangelists. It is a Gospel in miniature, a testimony to Christ not by someone who came to know Jesus much later during His public ministry or in the preaching of His Apostles, but by His very own mother—she who knew Him in a more intimate way than anyone else ever could. She teaches us of the Word that came into the world through her, by her faith as a daughter of Israel, her hope as an expectant mother, her love as the handmaiden of the Lord. In Mary’s motherhood, God reveals the ultimate condescension of His love towards Israel. He no longer appears as the distant Ruler imposing laws upon His subjects; now He is a child growing quietly inside His mother, filling her with the law-fulfilling grace of His Real Presence.

Mary’s song teaches us how to imitate her motherhood, receiving Christ into the womb of our souls and carrying Him within our hearts. When we look closely at what St. Luke records about the meeting of Mary and her cousin Elizabeth, we see how intimately linked the Magnificat is to the Angelic Salutation, and in this way to the Rosary, especially the Joyful Mysteries. To Gabriel’s earlier greeting, “Hail, full of grace, the Lord is with thee,” Our Lady had made the response: “Behold, the handmaid of the Lord. Be it done unto me according to thy word.” This simple fiat contained within it the offering of her whole being, and, as the sign of man’s acceptance of God’s Holy Will, determined the shape of all human history. She is blessed on account of her faith: “Blessed art thou that hast believed, because those things shall be accomplished that were spoken to thee by the Lord” (Lk 1:45). To believe in this divine message was to believe in a miracle greater than every other actual or possible miracle: the enfleshment of God, God becoming a man, dwelling among us, visiting His people.

But even Mary, filled with the grace of God, could not fathom all that her fiat meant at the first moment she said it. The Magnificat is the ripened fruit of her meditation on the mystery of the Annunciation, for indeed, she was the first one who meditated on this mystery. When we pray the Rosary, we are not merely reciting a set of prayers hallowed by tradition; we are doing the very thing the Mother of God did during the first Advent.

Mary, grasped and seized by the Spirit, speaks of God’s coming into the world, of the advent of Jesus Christ. For she knows better than anyone what it means to wait for Christ. She waits for him in a way unlike anyone else. She waits for him as his mother. She knows about the mystery of his coming, about the Spirit that is at play here, about the almighty God who works his wonders. She experiences in her own body that God’s ways with us are wonderful … that his way is beyond all understanding, beyond all proof, free, and with a mind of its own. (Bonhoeffer, The Mystery of Holy Night, 7)

Motherhood—like fatherhood, like priesthood or consecrated virginity—is not a mental category, much less a social construct; it is a lived reality, in which God works upon us and we are truly changed, as the clay is shaped by the potter’s hand. Our Lady’s fiat was the acceptance of God’s inscrutable plan, the taking up of her own cross in silence and wonder, perhaps with some confusion but with an unbounded faith. Mary did not have the problem, all too familiar in modern times, of separating her faith from her life. Everything she believed, she put into practice, and everything she did was rooted in faith—that is what makes her the greatest saint of all, the Queen of Angels and Saints.

At the beginning of any vocation or mission, one must accept God’s will with a certain “blindness,” and act upon it to the best of one’s ability. Understanding comes only later, as a gift of the Spirit. It is only after one has begun to live out a vocation, after one has started to fulfill the demands made by the Word of God, that one can reap the fruit of joy and grasp more fully what is unfolding in one’s life. One must do the will of God in order to understand it. This is the message of all the saints, who tell us with one voice that we shall never understand the purposes of God until we throw ourselves courageously into the work He has assigned to us.

It was the same for the Virgin Mary. She knew—imagine what must have been her feelings!—that she had been asked to be the mother of the Holy One of Israel, and had consented. What could this mean? What would it entail? At the time of Gabriel’s visitation Mary knew at least this, and it was enough: the Almighty was asking everything of her. He was asking for her very being to be placed utterly at the service of the promise He was about to fulfill, after so many centuries of suffering and waiting. The Magnificat is the sudden blossoming of her understanding of her Child’s destiny. Even Mary could not see the full meaning of this destiny until she stood at the foot of the Cross, keeping her sorrowful station to the last moment, awaiting the rising of her Son from the dark valley of death. As Scripture says of Mary and Joseph at the time when they lost Jesus, who had remained in the Temple: “They did not understand the saying which he spoke to them” (Lk 2:50). Throughout everything, that which was understood and that which was obscure or difficult, “his mother kept all these things in her heart” (Lk 2:51).

Like her consent at the Annunciation, the Virgin’s hymn is rooted in faith, in the acceptance of a mission of unfathomable depth. Although she shows that she has understood the importance of the event, namely the coming of the Messiah and the salvation of Israel, it could not have been any clearer to her how in fact this salvation was to be accomplished. The only further understanding she exhibits is at the same time the most important kind: her soul has grown closer still to God who, without ceasing to dwell within and beyond all creation, now dwells in her womb; her will firmly clings to his Holy Will. She understands now that her whole being has become the channel for God’s work in the world, that He has brought her into the heart of His power, mercy, and holiness. For this reason she can truly exult in God, whom she confidently trusts, to whom she has yielded herself up as a sweet oblation, for the salvation of the world.

The words pronounced in the course of a visit to Elizabeth fully express what the Virgin of Nazareth is experiencing in her heart after the Annunciation. Adoration of God filled with joy and joy filled with adoration of God: such is the state of her blessed soul, such are the deepest sentiments that her heart nourishes. They manifest themselves above all in the words of the Magnificat. In the Magnificat there springs forth that gratitude filled with humility which is the infallible sign of an encounter with the living God. Mary responds to the gift from on high not only by her words but also by the whole silence of the mystery of Advent that is realized in her. (John Paul II)