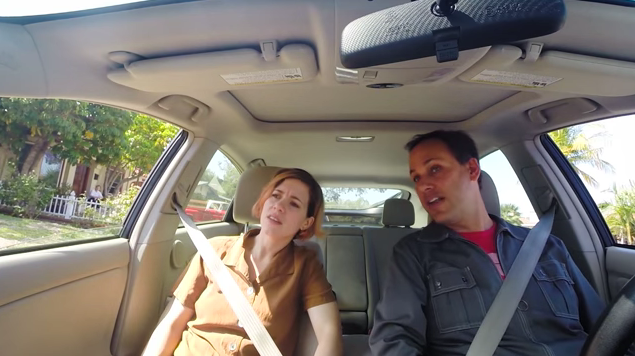 NARAL’s newest contribution to pro-abortion BS (bogus stuff) is a couple of comedians seeking, yet having a hard time finding, an abortion in California—the easiest place to get an abortion in America.

July 18, 2016 (LifeSiteNews) — Nothing brings laughter like having an abortion, right? Add NARAL into the mix and you have a really, really, really bad pro-abortion, comedy based on…well, it’s NARAL. So it’s all based on a lie. It’s called “Comedians in Cars Getting Abortions” (aka “Will Toyota Sue NARAL For Trademark Infringement?”).

NARAL’s newest contribution to pro-abortion BS (bogus stuff) is a couple of comedians (I’m using that term lightly) seeking, yet having a hard time finding, an abortion in California—the easiest place to get an abortion in America. There are 512 abortion “providers” in the Golden state, willing to make lots of green for the bloody act of violence.

One of the strangest lines in the video comes from the abortion-determined woman who declares: “I want an abortion because my body is doing a thing right now that is not incubating a person and I would like it to continue doing that thing.” Huh? Did she say “person”??? Thank you NARAL for, at least, having a second’s worth of honesty in the video. Her body, too, from the moment of conception had already changed course. She can’t continue what biology had already changed…well, without violently interrupting that natural process.

So on the actors went into NARAL la la land where abortion is magically illegal.

There are zero restrictions in getting an abortion in California. Zilch. Nada. That doesn’t stop NARAL from blowing sunshine up a Toyota Prius (which sadly had to endure 6 minutes of this painfully unfunny wannabe comedy). By law, parents can’t even be notified that their minor child (no matter the age) has had an abortion. A teacher can take a 6th grader off-campus and her parents will neither know that their child has been sexually violated in the first place nor medically violated by those the state has granted powers of complete secrecy.

NARAL paints a non-existent scenario pretending that “access” to abortion is difficult in a state with over 181,730 abortions in the last reported year, or 26% of the state’s 690,064 viable pregnancies. Of course, this “stat” comes from Planned Parenthood-funded Guttmacher Institute, which is equally as dishonest. There is no federal or state law that requires abortionists, by the way, to report the number of abortions they commit. The voluntarily provided numbers are most likely far higher.

Currently, there is a coalition of churches that is fighting the state’s unconstitutional mandate that churches and religious institutions fund abortion through their healthcare plans. Alliance Defending Freedom, a personal fave of mine, is representing them. Leading the opposition is Pastor Jim Garlow of Skyline Wesleyan Church, who is a father of four adopted children, one with my story—she was conceived in rape, too. Garlow told The Daily Signal how forcing churches to pay for abortion is “repulsive beyond words”. California is clearly violating the First Amendment’s guarantee of religious liberty. It’s exactly why the House overwhelmingly just passed the Conscience Protection Act of 2016.

Remember all that fuss when Obamacare was passed “in order to see what was in it”? Remember those guarantees that no one would be forced to pay for abortion? Like NARAL’s every word, President Obama’s assurance was a flat-out lie. Even without the state’s recent egregious pro-abortion mandate, California taxpayers have been paying  to kill those not considered to be “persons” every year. Medi-Cal, which is the state’s version of Medicaid, funded 93,542 abortions in 2010 (the latest year reported) amounting to $29,781,911 taxpayer dollars. This number is more than twice that 10 years prior: 45,794 abortions paid with $14,754,481 tax dollars.

Remember all those shrill denials that no federal dollars are spent on abortion? Yeah. Another lie. Medi-Cal pulls in $37 billion from American taxpayers across the nation via the federal government, with an increasing amount spent on killing California’s future. Many Californians have been unknowingly paying to have innocent human life butchered by Planned Parenthood, hospital systems and other abortion facilities throughout the state, which is no laughing matter.

But back to the knee-slapping video by NARAL…

The video jokes about a 32-hour waiting period. There is no such law in California.

The video jokes about abortionists being forced to inform a woman about physical health risks. There is no such law in California.

The video jokes about abortionists having to show an image of an ultrasound. There is no such law in California.

The video jokes about breast cancer not being a risk for having an induced abortion. There is an actual, and significant increased risk. Even the National Cancer Institute, and a multitude of peer-reviewed studiesworldwide confirm this correlation. Sadly, the NCI, like most medical associations has chosen money over morality. They’ve hidden their own branch chief’s study finding induced abortion and hormonal oral contraceptives to significantly increase triple negative breast cancer.

That’s definitely not funny. In fact, that’s part of the premise of an incredible new movie called Hush. The phenomenal documentary is directed and hosted by Punam Kumar Gill—who is “prochoice”. The film investigates how many in the medical profession are denying the science behind abortion’s impact—physiologically, psychologically, and reproductively—on women.

NARAL has been lying since it was birthed by pro-abortion activists determined to swindle a nation into embracing the violence of abortion. You know when a co-founder of your organization (Dr. Bernard Nathanson) calls you out as blatant liars, implicating even himself in the despicable scheme, credibility for the group has clearly been aborted.

And then there’s NARAL’s attack on pregnancy care centers which provide all of their services (medical and otherwise) for free and are not state-funded. Yet, these life-saving centers are being forced by the state (via AB775) to promote abortion and post signs informing women where to go for abortions. You know, because it’s so hard to get an abortion in California.

I wish this NARAL video was just a bad joke. But it’s not. It’s a reflection of the increasing callousness of a pro-abortion movement that doesn’t cherish the irreplaceable value of every human life.

I’m a firm believer, though, in transformation. No one has to remain on the side of a lie. NARAL staff members and supporters, if you really want to laugh and experience joy (like many ex-“pro-choicers” out there), let the Truth set you free.