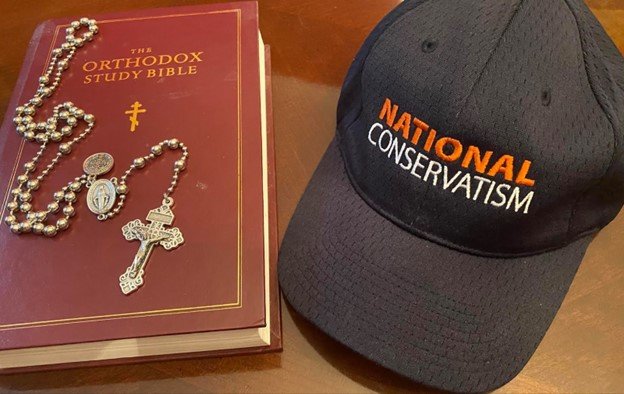 (LifeSiteNews) –  After my political awakening about a dozen years ago, I sensed that our American freedoms were endangered by our too-big, overreaching Leviathan government and so I co-founded National Capital Tea Party Patriots.

I then planted myself firmly on the front lines of the marriage battle, fighting to protect conjugal – one man and one woman – marriage in the leadup to the Supreme Court’s disastrous Obergefell decision. In the years since, I’ve done the best I can to warn about the quiet infiltration of LGBT influence within Christian and conservative circles.

The threat we now face within our government at every level and within virtually every public and private institution is exponentially larger. It has a name: “Woke Neo-Marxism” promoted by globalist elites. It has the power to destroy everything.

The fabric of our nation and the western world continues to be brutally picked apart and shredded by Globalist powers who, in order to “Reset” civilization, have made it their mission to destroy the immutable definitions of marriage and family, man and woman, mother and father, boy and girl, and son and daughter, while demonizing religion, patriotism, and law and order.

It has become clear to me that there is only one course of action available to avoid the impoverished serfdom – if not annihilation – that Globalist elites have planned for us. It too has a name: National Conservatism. Some call it “Christian Conservatism.” Both are accurate descriptions of the movement, and yet you’ve probably never heard of it.

A few weeks ago, I attended the third National Conservatism Conference, better known as NatCon 3, in Miami, Florida, as a correspondent for LifeSiteNews. While I was busy around the clock funneling information to my colleagues in their offices around the country, conducting interviews, and tweeting news from the conference in real time as much as I could, I was taken by surprise: I found myself heartened and inspired by presentation after presentation.

Christian Conservative Nationalism is a big deal. It makes the case for ending the era of Libertarian “small-government conservatism” while promoting religion as the center of public life. It goes beyond social conservatism: It calls for the United States to be an unequivocally, unambiguously Christian nation based on the Bible.

The movement away from globalism toward National Conservatism is what recently propelled Giorgia Meloni to become Italy’s next Prime Minister. Meloni spoke at a National Conservatism conference in Rome in early 2020, and at the World Congress of Families in 2019 where she asked questions on the minds of many:

We will defend God, country and family. Those things that disgust people so much. We will do it to defend our freedom because we will never be slaves.

Many similar simple declarative statements at the Miami conference were equally riveting because they expressed concerns and truisms residing deep in the gut of so many Americans, including me.

“This country is on the brink. It’s at the very end of what decadence can sustain. It’s on the edge. This country is in a moment where it’s do or die,” said Yoram Hazony, a conservative Jew and chief organizer of the conference.

He then made a stunning statement: “The only thing that is strong enough to stop Woke Neo-Marxism is Biblical Christianity.”

The Daily Wire’s Michael Knowles took the podium and said Christian Nationalism is the opposite of “Atheist Globalism” and that “The soul of America is and always has been essentially Christian.”  He continued:

If the schools teach Biblical morality, then they can’t teach genderqueer morality.

If the schools teach genderqueer morality, then they can’t teach Biblical morality.

This inversion in the latter half of the 20th century was not a development or an evolution of our national character, nor was it a neutral expansion of free speech. It was a spiritual revolution, a change in religion, a reordering of the nation’s soul.

With 100 heroic speakers at NatCon 3, wide ranging common sense truths – about transgenderism, abortion, fatherhood, the important role of religion, energy policy, open borders, reeling in Big Tech, election integrity, purging or dismantling the FBI and DOJ, China diplomacy and so much more – routinely suppressed by legacy and social media and often ignored by the woke-compliant D.C. GOP establishment were proclaimed loud and clear.

What I saw at NatCon 3 surpasses any historic event I’ve previously had the privilege to witness, and I’ve seen my share.

In 2014, I attended the Vatican’s International Ecumenical Colloquium on The Complementarity of Man and Woman, held in the Synod Hall, with Pope Francis and an array of Catholic prelates and other religious leaders present.

Sadly, it was not enough to head off instituting same-sex “marriage” in western nations. The U.S. Supreme Court’s Obergefell ruling would be announced just seven months later.

I was there for the Tea Party’s inception. In September 2009, hundreds of thousands of people poured into Washington, D.C. for the 9/12 Taxpayer March and Rally – an exponentially larger number than hoped for or expected. It was thrilling. I had goosebumps. I knew I was witnessing something historic. “Outside the beltway,” Americans had finally awakened and said, “Enough is enough.”  The Tea Party movement had a huge impact on the 2010 midterm elections, when a red tsunami swept Republicans into Congress and statehouses across the country.

It too was not enough. After all, look at where the country now stands today.

I again witnessed history when Donald Trump spoke at the 2020 March for Life Rally on the National Mall. I was privileged to be there, and knew something was in the air, something I had never before sensed at any of the previous Marches for Life in which I had participated.

Then just 2 1/2 years later, I was standing in front of the U.S. Supreme Court when the Dobbs decision was announced, overturning Roe v Wade. That was an historic, euphoric moment, but so far it too has proved not to be enough to push back against the culture of death that has gripped America.

However, my sense of being present for history-in-the-making at NatCon 3 surpassed anything I had experienced at any of those previous momentous events.

I realized I was likely witnessing a pivotal point in the history of western civilization, the beginnings of an important movement of great import to the U.S. and to the world. I watched the coming together of elite thinkers essentially hitching their wagon to the legions of MAGA supporters, to face head-on the Globalist Woke Neo-Marxist threat.

We are powerless to resist globalism on our own. Crushing laws, regulations, and censorship will either enslave us or snuff us out. Only nations – Christian nations – will be powerful enough to stand against atheist globalism.

National Conservatism: A Statement of Principles

We are citizens of Western nations who have watched with alarm as the traditional beliefs, institutions, and liberties underpinning life in the countries we love have been progressively undermined and overthrown.

We see the tradition of independent, self-governed nations as the foundation for restoring a proper public orientation toward patriotism and courage, honor and loyalty, religion and wisdom, congregation and family, man and woman, the sabbath and the sacred, and reason and justice. We are conservatives because we see such virtues as essential to sustaining our civilization. We see such a restoration as the prerequisite for recovering and maintaining our freedom, security, and prosperity.

We emphasize the idea of the nation because we see a world of independent nations—each pursuing its own national interests and upholding national traditions that are its own—as the only genuine alternative to universalist ideologies now seeking to impose a homogenizing, locality-destroying imperium over the entire globe.

Drawing on this heritage, we therefore affirm the following principles: