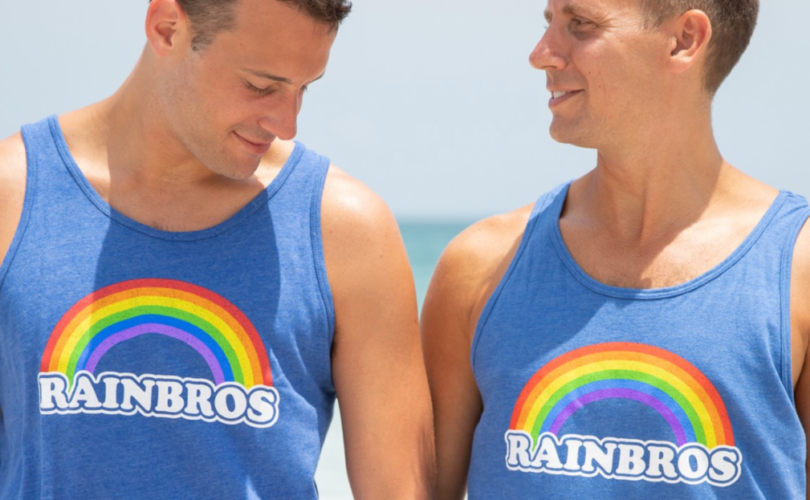 This is the sixth in an ongoing series on the problematic rise of LGBT influence in conservative and GOP circles. The first five commentaries can be found here, here, here, here, and here.

(LifeSiteNews) — Until a few days ago, few people outside the offices of National Review knew that the revered conservative magazine’s publisher is a homosexual, “married” to a man.

“The publisher of the most important conservative magazine of the last 60 years, National Review, is gay-married?” wrote The Stream’s Peter Wolfgang, who broke the story. “Garrett Bewkes, the man overseeing the magazine once edited by William F. Buckley, has a husband.”

“He’s been the publisher for five years. How did this happen? And what does it mean for the conservative movement and the Republican party?” Wolfgang asked.  “I suspect a lot of NR’s long-time readers don’t know this. I wouldn’t have known if a local newspaper hadn’t run an article by Bewkes’ ‘husband’ Bradley.”

Together they’re starting a Connecticut chapter of the Log Cabin Republicans. That’s a group “dedicated to representing LGBT conservatives and allies” in the Republican party, as they explain on their homepage.

Bradley Bewkes will be point man for the efforts to subvert what little opposition there is to the LGBT agenda within the Connecticut GOP. Garrett will apparently continue subverting what little belief in marriage remains on the American right.

LifeSiteNews reached out for comment to a number of current and previous National Review contributors and staff, but as of this writing, all have either declined or ignored the invitation.

Conservative elites who once boldly defended the immutable definition of marriage as between one man and one woman have, since the U.S. Supreme Court’s Obergefell decision requiring states to recognize same-sex marriages, chosen to remain silent as a rising breed of conservative homosexuals — let’s call them “GayCons” — increasingly bring into conservative circles an ideology that at its core is massively anti-conjugal marriage, anti-family, and anti-child, but very much pro-homosexuality.

Our conservative elites’ silence on homosexuality and same-sex marriage speaks loudly about their truce with sodomy, yet is unsurprising considering who some of the major players are delivering news consumed by conservatives nowadays:

All of these news sources, which are hugely popular among conservatives, are compromised when it comes to homosexuality. Homosexuality and same-sex marriage have been fully accepted, normalized, and embraced.

In 2013, I was invited to be a panelist at The National Review Summit in Washington, D.C.  I was then a self-identifying gay who had publicly come out against the big push for same-sex marriage.

The panel of conservative academic all-stars arguing for preserving the immutable definition of marriage included Professor Mark Regnerus, a University of Texas sociologist; Professor Brad Wilcox of the University of Virginia and founder of the National Marriage Project; Maggie Gallagher, conservative author, activist, and co-founder of the National Organization for Marriage, and me, and was hosted by the Heritage Foundation’s Ryan Anderson.

There was one other gay man who spoke at the National Review Summit that year: billionaire PayPal founder Peter Thiel.

Other than my panel and one other session during the three-day event, “Social conservatism was conspicuous at the summit as a topic that organizers downplayed,” noted The Atlantic at the time.

[O]nly two panels during the entire three-day event really focused on social issues: a Friday talk on abortion (which coincided with the first day of the annual March for Life) and a panel on marriage on Sunday. The latter of these panels, fascinatingly enough, featured one of the summit’s only two openly gay men: Doug Mainwaring, of the National Capital Tea Party Patriots. (The other, venture capitalist Peter Thiel, didn’t really address gay marriage.) But Mainwaring opposes gay marriage, putting him at odds with the two biggest gay Republican organizations, GOProud and the Log Cabin Republicans, both of which advocate for marriage equality. Neither had any official representatives on stage during the event, though GOProud board member Bruce Carroll attended the conference as a blogger.

Thiel wasn’t challenged about his views concerning same-sex marriage, presumably because his voice on fiscal issues was prized as were, no doubt, his deep pockets.

Five years later, after I had published a commentary entitled “The gaying of Fox News,” calling attention to the increasing presence of homosexual on-air personalities and support — even among Catholics — for same-sex “marriage” at the network, a National Review article chided me for my Catholic viewpoint and for warning readers “Don’t expect truly ‘Fair and balanced’ reporting on LGBT issues from Fox News.”

I expected to take hits from gay media when I published that piece, but not from the venerable conservative Catholic publication founded by William F. Buckley.

There were other indications at the time: Off the record, behind the scenes discussions with folks who are now towering mainstream conservative personalities who indicated to me that they viewed same-sex marriage as not only inevitable but a good thing. They were glad the issue was about to be “settled” as a matter of law and of public discourse.

Conservative grassroots and conservative elites are not the same. At the grassroots level, men and women still cherish and uphold conjugal marriage; elites no longer care and have moved on to focus their attention on criticizing the rise of transgenderism. Yet their moral outrage over transgenderism’s ugly hold on popular culture will likely soon wane.

The normalization of homosexuality, and especially the normalization of homosexual parenthood, necessarily leads to the more radical gender ideology advancing from the left today. If men and women are perfectly interchangeable in sex, and in the role of a mother or a father — those things most closely tied to biological reality — then of course they must be interchangeable in everything else. The premises underlying the acceptance of L, G, and B logically lead to T, sooner or later.

Bank on it. It will happen.