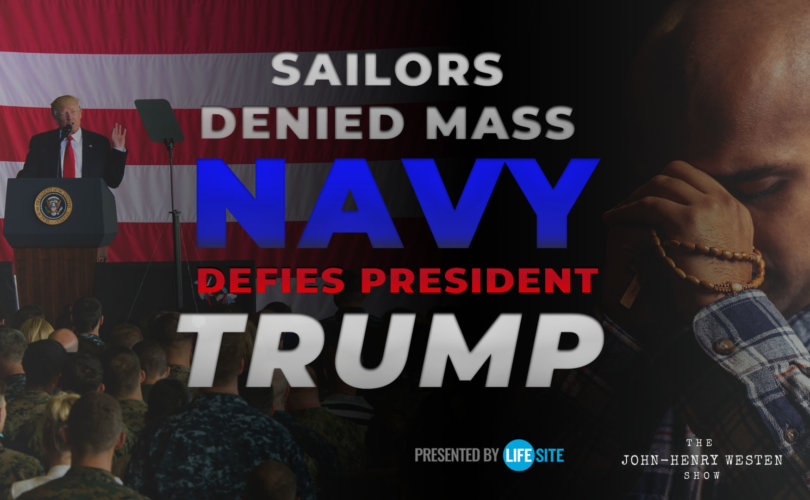 LifeSite has launched a petition calling on President Trump to overrule the Navy’s outrageous measure. It already has over 17,000 signatures. Be sure to add your name to that petition. Click here to do so.

Today on The John-Henry Westen Show I speak to a member of the U.S. Navy, a Catholic, who has been impacted by this unjust order.

He told me that it’s essential that he goes to Mass right now given that access to the sacraments is integral to living out his faith and staying strong in the face of war.

He also said he was raised to believe that God, country, and family is the proper order of things but that right now, thanks to the Navy’s directive, that is out of whack and country is being put first.

He called on members of the Navy to step up and get rid of this unjust directive. He also called on his fellow service men to pray, do penance, and beg God to give them strength at this time.

The First Liberty law firm has announced it is suing the Navy for its anti-religious freedom decree, which threatens to court-martial any service member that attends church.

“On June 24, the Navy issued an order that banned troops from attending indoor religious services, although other activities such as using mass transit, hosting social gatherings of any size, and participation in protests are all permitted,” the group has explained.

I hope you will sign the petition calling on President Trump to overrule this anti-religious freedom measure. Again, click here to add your name.

I also hope you will join me in prayer that the Navy scraps the order altogether. Already there is news that they have slightly modified it.

Although this is progress, it isn't enough. We must continue to stand up for religious liberty. The men and women who have dedicated their lives to serve America and the freedoms it was built upon deserve more.