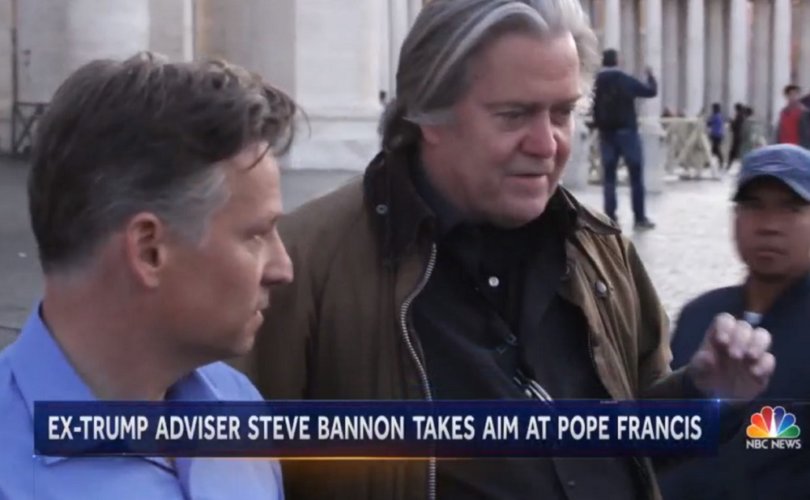 May 1, 2019 (LifeSiteNews) — NBC chief foreign correspondent Richard Engel has launched a new “On Assignment” series where, purportedly, he “doesn’t just get the story, he goes to the center of it.”

Engel kicked off his show on April 14 with a report on how “ultra-conservative” Catholics are “taking aim” at Pope Francis, a “humble” priest who “reaches out” to the marginalized.

It’s pretty much what you’d expect from someone who spends most of his time on television talking with Rachel Maddow and Andrea Mitchell.

Without getting into all the details, Engel’s “investigation” was basically an attempt to thwart the rising tide of criticism inside and outside the Catholic Church of Pope Francis.

Now, why would an MSNBC correspondent come to the aid of the head of the Church? After all, Catholicism is opposed to gay “marriage,” abortion, transgenderism, and every other position liberals hold dear.

As a card-carrying member of the international elite, Engel likely senses that an increasing number of Catholics and pro-sovereignty politicians are fed up with the heterodox, open-borders pontiff, and that if their sentiments spread, the anti-Christian world order the ruling class wants to usher in could be in jeopardy. In other words, Francis is now the face of the global left and the last, best hope they have to stop the growth of nationalism across the West. Naturally, something has to be done to neutralize his opposition.

To his credit, Engel grants a good chunk of airtime to Church Militant’s Michael Voris and the Acton Institute’s Fr. Robert Sirico. Respectively, they point out the gay cabal in Rome and where the pope’s approach to economics goes wrong. The viewer easily understands they're from the “conservative” wing of the Church.

Still, at the end of the day, Engel’s report is really just a smear attempt on Steve Bannon, whom he profiles at length while grilling him for his views on immigration and populism. In brief, Engel’s goal is to portray the former presidential adviser as a mean-spirited, shadowy, Trumpian manipulator trying to “Bannonize” the church while depicting Francis as an open-minded, welcoming, loving pastor on the receiving end of conservative Catholic “attacks.”

Engel enlists the help of radical pro-LGBT priest Fr. James Martin, a close friend of liberal TV host Stephen Colbert, to push his narrative. Martin tells Engel that Catholics who criticize Francis are, at root, just racist toward migrants and that Bannon is essentially an alt-right bigot.

Martin has previously argued that homosexual couples should kiss each other during the exchange of peace at Catholic Masses. Any Catholic remotely familiar with Church teaching will understand why Martin was tasked with playing the role of Francis cheerleader.

Engel’s story is instructive in that it helps clarify, as if it were not already obvious, whose side the media are on in all this.

It used to be that pedophile priests was the stuff of blockbuster movies and front-page stories (think the Boston Globe circa 2002). But now that the pope is a liberal pushing many of the same policies the political left is, the media have said nary a word about the sex abuse crisis exposed by Italian archbishop Carlo Viganò. No wonder Mika Brzezinski recently told a panel on her Morning Joe program, “I love this pope.”

Not only do the mainstream media recognize the danger anti-globalist attitudes pose to the pope’s agenda, so does the Vatican.

From May 1 to 3, the Pontifical Academy of Social Sciences is hosting a conference on nationalism and the nation-state featuring a talk by Cardinal Walter Kasper. Given Pope Francis’s anti-walls attitude, it’s not hard to imagine that the three-day gathering will use a lot flowery language about helping the stranger and welcoming migrants while condemning “xenophobia,” “fear of the other,” and “authoritarianism.”

The academy has previously welcomed Bernie Sanders, former California governor Jerry Brown, and population control activist Jeffrey Sachs to speak at its events. Its current head, Bishop Marcelo Sánchez Sorondo, once claimed that communist China is the “best” at “implementing the social doctrine of the Church.”

Italian journalist Riccardo Cascioli, the director of La Nuova Bussola Quotidiana, has argued that the close collaboration of leftists with the Vatican is really part of an infiltration effort aimed at placing “the great moral force that the Catholic Church undoubtedly exercises … at the service of the New World Order.”

“The Catholic Church was — and it is — the only point of resistance to … the idea of a world-led government guided by technocratic elites,” Cascioli said during an online conference on population control in October 2017.

The Church has fought long and hard against efforts launched by the United Nations to undermine the family and to impose gender ideology and abortion rights, he said. “For this reason, the Catholic Church was a target.”

Cascioli is spot on in his remarks. So long as Pope Francis remains the head of the Church, international elites desirous of a borderless world will have an ally sitting on the Throne of St. Peter. They’ll do everything in their power to keep it that way. The only question now is whether or not more lay Catholics will stand up and, as Steve Bannon is doing, defend the Church from their efforts.

An edited version of this essay appeared on Human Events.