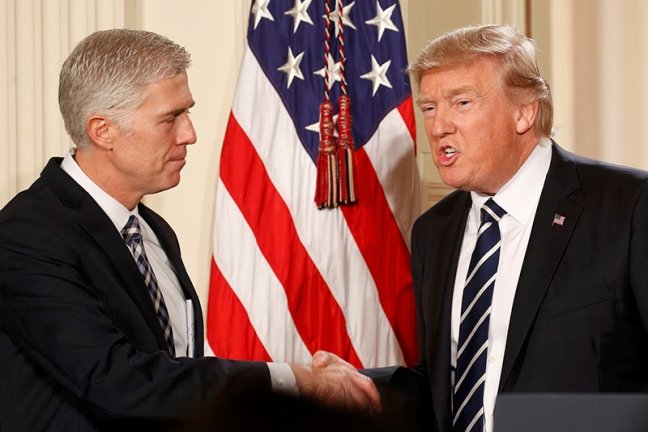 March 24, 2017 (LifeSiteNews) — I have been holding my opinion on Neil Gorsuch. From the time he was announced as Trump’s highly lauded Supreme Court nominee and then more information started to come out about him, there have been growing uncomfortable feelings about the nomination. And now, as the confirmation hearings have been underway, I am worried.

Despite effusive praise from numerous pro-life and pro-family leaders, this man is NOT, as Trump has repeatedly been told, another Scalia. In my view, the President has been misled – although Gorsuch does have praiseworthy characteristics as a justice and has made some excellent, major rulings.

But can we trust that he will courageously rule as the nation desperately needs him to rule on all of the most crucial issues? I think there are now legitimate doubts, although on many issues he will likely rule well.

During day three of the Senate confirmation hearings, Gorsuch was asked by Senator Dick Durbin whether the intentional taking of unborn life is wrong.

To me, there was something unnerving about how far he went in accepting the current realities of that horrendous decision that was based on lies and deliberate misinterpretation of the Constitution.

Also during the confirmation hearings, in response to a question about same-sex “marriage” and the results of the Obergefell decision – which many consider an even more outrageously corrupt, activist Supreme Court decision than Roe v Wade — Gorsuch stated it “is absolutely settled law.”

He did not just call it “settled law,” which one could say, well, yes, in legal terms that is what it could be said to be … for now. But he unnecessarily and disturbingly added the word “absolutely.” Why did he go to that length?

That comment seemed to indicate Gorsuch is not a full constitutional originalist. No originalist would ever make such a comment that appears to betray the Constitution and the intentions of the Founders – considering the travesty of the Obergefell decision.

Now we likely know why Trump also called Obergefell “settled law” in response to a question during a 60 Minutes interview. He had likely been talking to Gorsuch.

Justice Scalia had ripped the Obergefell decision to shreds for its inventions of nonexistent rights out of thin air, as he did with many other judicial activist decisions by his peers on the court and in lower courts. He described the decision as the “furthest imaginable extension of the Supreme Court doing whatever it wants.” He added, “Do you really want your judges to rewrite the Constitution? I don't know how you can get more extreme than that.”

Scalia even went so far as to argue that legalizing same-sex “marriage” was a “threat to American democracy.”

It is understandable that Gorsuch would be circumspect during his confirmation hearings in response to questions about particular cases, but he has seemed to exhibit a pro-judicial arrogance, deferring too much to the reputations and status of justices who in very many cases in these times do not at all deserve such deference.

Many deserve harsh criticism, if not condemnation and censure. It is long overdue.

I was taken aback by Gorsuch’s publicly expressed rebuke of Donald Trump’s legitimate criticisms of the court ruling that rejected his first immigration Executive Order.

Trump accused the appellate court of being “so political.” He labeled a judge who ruled on his executive order a “so-called judge” and referred to the ruling as “ridiculous.”

Perhaps Trump should not have used the term “so-called judge,” but the ruling was indeed “ridiculous” and totally out-of-order. It clearly violated established presidential privilege and was a raw abuse of the powers of the court for partisan and ideological intentions.

It was about time someone in high authority called judicial activist justices to account. They have been destroying the rule of law in America and trashing the Constitution. For years they have been far overstepping their Constitutional authority.

Gorsuch told a senator that the president’s comments were “demoralizing and disheartening.” Did he really have to go that far? Why could he not have acknowledged that yes, there have been many very questionable rulings by activist judges in recent decades?

The Washington Post wrote that “Gorsuch ‘stated very emotionally and strongly his belief in his fellow judges’ integrity and the principle of judicial independence.”’ Really? All judges, given the many outrageous decisions we have seen?

Justice Scalia never held back and had no regard for popular opinions, political correctness or what the other justices thought about him. As well, his solid Catholic Christian formation taught him about right and wrong and his serious duty to the American people and to God to honor the Constitution and the intentions of the Founding Fathers. He was not perfect, but he frequently issued highly prinicipled legal opinions.

Gorsuch’s comment that Obergefell “is absolutely settled law” could be seen to have been insulting to judicial conservatives. I would go so far to say it indicated clear danger about how he would rule on the court – on certain issues.

Following are some of the stories that we published on the Obergefell decision:

Serious questions about Gorsuch and homosexuality

There have also been other signs about Gorsuch that too many have tended to pooh-pooh as being significant. Well, they are important signs.

A Feb. 11 New York Times article indicated that Gorsuch is pro-homosexual. This may explain his excessively accepting comment on the Obergefell decision.

In a LifeSite article on the Times report, we noted,

Matthew Hoffman, in his in-depth report on Gorsuch expands on Springer's liberal excesses,

“According to an exposé published by the Daily Mail, she openly supports homosexual “marriage” and conducts blessings of same-sex couples, and attended the ultra-feminist “Women’s March on Washington” to protest the Trump presidency. She also denounced “criticism and disrespectful rhetoric” regarding Islam following the San Bernadino terrorist attack in 2015. The Washington Post’s own investigation of the parish also found that the pastor engages in leftist political activism.”

And yet, Hoffman reports,

“Gorsuch and his family are far from being mere passive participants in the church. Gorsuch himself serves as an usher, and his wife as a lector, and his two daughters have served as acolytes during worship services.”

“The Episcopal Church has also issued statements opposing any legal restrictions on the killing of the unborn, and holding that abortion can be justified in cases of risks to the physical or mental health of the mother, rape, incest, or fetal malformation.”

There is no way that Justice Scalia approved of homosexual relationships. He would never have regularly attended such a liberal Church as Gorsuch has and Scalia would have run from a parish with a pro-LGBT pastor that strongly supports homosexual “marriage” and opposes any legal restrictions on abortion.

Scalia, from his orthodox Catholic Christian formation and affiliation, knew right from wrong and was frequently outspoken about such matters when circumstances demanded it. He did not deprive those who needed to hear uncomfortable truths from the charity of those truths.

The LifeSite article on the NY Times report continued that,

… Gorsuch reacted when his close friend and former Harvard classmate Phil Berg told him that he had a “boyfriend.”

“He [Gorsuch] didn't skip a beat,” Berg said, saying that the conversation led to a “special bond” between he and Gorsuch. “It was a huge deal for me, and it made a lasting impression.”

Similarly, the Harvard Crimson reports that Gorsuch offered Harvard classmate Berg “unwavering support” when Berg “came out” to him as homosexual.

Along the same lines, Joshua Goodbaum, a former clerk to Gorsuch, told the Times that his boss was “thrilled” for him and his “husband” when they got same-sex-“married” in 2014:

“He was actually kind of syrupy about it. I remember him saying, ‘You’re going to see how wonderful this is for your relationship,’’’ Goodbaum said.

Gorsuch is said to be a strong proponent of Natural Law. His above noted statements and actions on homosexuality defy that claim.

As well, no authentic, believing Christian would ever offer such affirmation to persons engaged in behavior that threatened serious emotional, psychological, and physical harm, and especially devastating spiritual harm.

I cannot remotely fathom Justice Antonin Scalia ever having been so blind to his sacred responsibility to his fellow man as Neil Gorsuch appeared to exhibit (if these quotes are true) in response to his friends with same-sex attractions.

I hope my concerns about Gorsuch are not as serious as they seem, but the things noted here cannot be ignored.

We must continue to pray for the best outcome for the next justice of the Supreme Court. May God’s will be done on this because of the crucial importance of this and future Supreme Court nominations for the welfare of the United States.

* For a balanced, thorough and well-researched report on Gorsuch written by LifeSite's Matthew Hoffman before the confirmation hearings began, see “Neil Gorsuch: The new Scalia…or something else?“

Democratic senator: Reject Gorsuch because he thinks ‘the intentional taking of a human life’ is ‘always wrong’

Neil Gorsuch: The new Scalia…or something else?