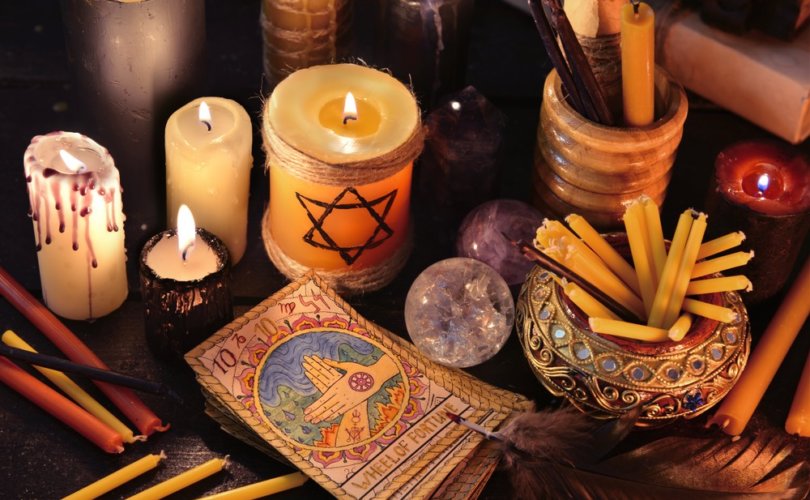 November 8, 2018 (LifeSiteNews) – Following the confirmation of Brett Kavanaugh as a Supreme Court judge, an occult book shop in New York hosted his mass-“hexing”: people identifying as witches gathered to curse him. They had earlier done the same thing to President Trump. Reading such stories in reputable news sources like the BBC brings to mind G.K. Chesterton’s remark:

When men choose not to believe in God, they do not thereafter believe in nothing, they then become capable of believing in anything.

As LifeSiteNews has reported, however, self-described witchcraft has grown to the level which is no longer simply a joke. It is important to keep three points in mind about it. First, the claims of today’s occultists and witches to some historical continuity with European paganism are completely deluded. Secondly, it is nevertheless spiritually dangerous. Thirdly, Catholicism is the form of religion it most detests, and also the form which can most help its adherents.

Modern pagans and witches claim to be the revivers or inheritors of a pre-Christian tradition. The claim may be sincere, but the reality is that we know almost nothing about the details of ancient Celtic and Germanic paganism (the most favored kinds), and very little even about the alleged European witchcraft which caused such panic in the 16th and 17th centuries. We do, however, know exactly what the historical roots of modern occult and pagan practices are, namely the works of the Frenchman Eliphas Levi (1810-1875), and the Englishman Aleister Crowley (1875-1947). Between them they invented rituals and practices out of whole cloth.

Even widely-repeated claims that Catholic feast days and devotional practices have “pagan origins” are generally without serious historical foundation. Everything you may have read about Eostre and Samheim is almost certainly nonsense. Neo-Paganism is a modern religion. Modern magic has zero ancient roots.

On the second point, the fact that this stuff is a historical fake makes it somewhat ludicrous, but does not render it harmless. After years of research into magic, Christopher Marlowe’s fictional Dr. Faustus finally conjures up a devil, who informs him that he could have done it more quickly:

For, when we hear one rack the name of God,

Abjure the Scriptures and his Savior Christ,

We fly, in hope to get his glorious soul.

Marlowe was right: those who open themselves up to spiritual influences other than God need never wait long. This is a truth understood not only by the Catholic mystical tradition, but by Eastern spiritual traditions as well, which insist on wise mentoring for those engaged in spiritual practices such as meditation. New Agers often display worrying naivety about what people can encounter, both from the spiritual realm, and from within themselves, when meditating. It goes beyond naivety, however, for those who deliberately seek out darker forces for the sake of magical power. In 1986, the National Catholic Register published a letter, reading in part as follows (it is quoted in Donna Steichen, Ungodly Rage pp. 70-1):

When I was a witch, I performed rituals. I evoked spirits. I called entities. I cast spells, burned candles, concocted brews. The only thing I didn't do was fly on a broom, but I probably would have figured it out if given time. But where did it lead to? Into darkness, depression and the creation of an aura of gloom around me. I was frequently under demon attack. The house where I lived was alive with poltergeist activity … due to residual “guests” from rituals. My friends and family were afraid of me. I knew I had no future; all I had was a dark present. I was locked in by oaths and by “destiny”. But I had power, something I'd always wanted. It wasn’t Satan's fault. He didn't exist—or so I thought. I gave it all up, and came to Jesus on my knees. … He freed me from the oppression and gave me back my soul—the one I had so foolishly given to evil in exchange for power. .. Our salvation was bought at a great price and all we have to do is reach out for it. But we cannot serve two masters.

On the third point, for many occultists the Church is something holy which they want to defile; this is the central idea of Aleister Crowley’s “Gnostic Mass.” This represents an acknowledgement of the Church’s power, and a hatred of the thing that has the power to save them, through a moral cleansing and, if necessary, exorcism. Just as Dr. Faustus came to hate the holy old man who nearly secured his last-minute repentance and salvation in Marlowe’s play, those deeply involved in any sinful lifestyle sometimes react with hostility to the idea that escape is possible. Try offering to pray for them, and watch the reaction.

That hostility mingles a defiant act of despair, with a cry for help. We should not close our ears to it.