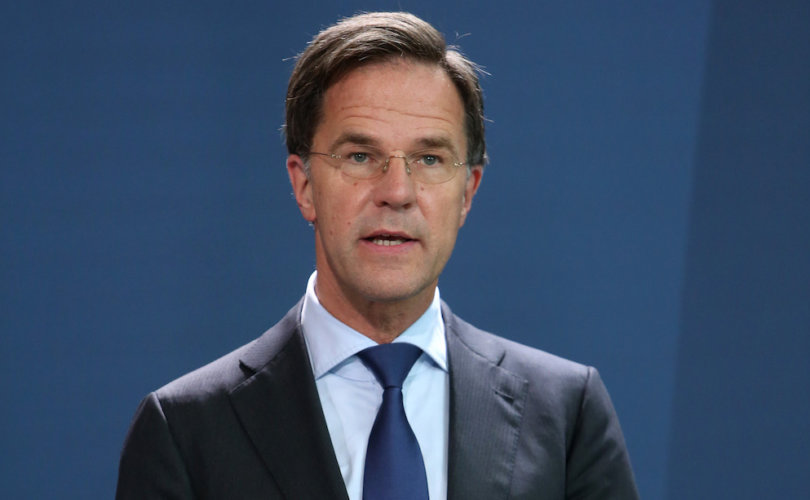 (LifeSiteNews) – The Netherlands is set to abolish the majority of COVID restrictions, according to international news reports, but as has now become increasingly frequent in Europe, a wide-ranging “health pass” will replace them.

As of September 25, leaked information from the “Outbreak Management Team” has revealed that proof of “complete” vaccination, recovery from COVID less than six months ago, or a negative COVID test less than 24-hours old will be required to enter cultural venues except museums and libraries and indoor spaces in hotels, restaurants, and cafés.

Strong opposition in Parliament has already obliged the government to scrap plans to make the pass compulsory on restaurant and café terraces. Some cities such as Amsterdam have made clear that they will not actively inspect or implement fines against restaurant and bar managers on customer checks. Workers in the said venues will not be required to have a valid health pass.

At the same time, the “one-and-a-half-meter rule” which has been in force since April 2020, at the beginning of the COVID crisis, will be lifted on September 25. At last, people who do not share the same home will not risk a 95 euro fine if they move too close together (and even 181 euro, or around 212 dollars inside shops).

Indoor events will be able to function normally, although restaurants and bars must close between midnight and 6 a.m., even when functioning at outdoor events that will now be able to go on all night. Large indoor events may function at 75 percent capacity, but must close at midnight. The “one-and-a-half-meter” rule has been increasingly ignored by the Dutch population in recent months.

All these decisions were made because of a low death and “case” rate in the Netherlands. Deaths attributed to COVID have dropped to a daily average of between two and seven since mid-June, despite a large number of “cases” from the end of June to August 10 that did not translate into “COVID deaths.”

The infection rate is now moderate and in a downward trend. The worst of the “pandemic” is as good as over in the Netherlands and has been for over six months, without lockdowns and much less stringent masking laws than in neighboring countries. (In particular, considering that children and adolescents are not big spreaders of COVID, they are not worn in classes either in school or at college.)

— Article continues below Petition —
PETITION: No to mandatory vaccination for the coronavirus
Show Petition Text
1073345 have signed the petition.
Let's get to 1100000!
Thank you for signing this petition!
Add your signature:
Show Petition Text

While the mechanisms by which the SARS-CoV-2 virus spreads are not known with certainty, it seems that COVID restrictions have not played a major role in the reduction of cases and deaths in the Netherlands. The lesser lethality of the Delta variant appears to have been a more important factor in Europe, where it has headed infections over the last months.

But despite a situation that continues to improve, the current Dutch coalition (the cabinet resigned in January 2021 over a childcare benefits scandal and a new government has yet to be formed) has waited until the end of September to lift restrictions, and is using the event to implement the even more burdensome measures behind appearances of “returning to normal.”

In neighboring France, where a much wider-ranging “sanitary pass” has been implemented since August 9, downward COVID trends have been officially attributed to segregation between pass-bearers and those who are now considered as “COVID spreaders” responsible for ongoing contaminations and deaths. This has been made especially easy since the “vaccinated” are no longer obliged to undergo COVID tests even though they can be contaminated and contaminate. At any rate, France had relatively more “cases” and “COVID deaths” than the Netherlands.

Also, weekly anti-sanitary-pass demonstrations in France where thousands gather every Saturday in up to 200 towns without masks or “social distancing” have not given rise to a single “cluster.”

The percentage of the total population that has been fully “vaccinated” in France reached 64.2 on September 15, only a fraction more than in the Netherlands, where 63.2 percent had received the presently required doses of the experimental jab.

Numbers have stagnated for over a month. In France, since September 15, people in the health sector face a vaccine mandate which has led some 300,000 health workers to be suspended without pay because they are refusing the shot.

In the Netherlands, implementing a sanitary pass at the very moment when both “cases” and “deaths” are marginal, and have been for weeks, is an evident sign of the government’s desire to continue to control the population.

In fact, the true objective which is being openly discussed by Prime Minister Mark Rutte and Health Minister Hugo De Jong is to “incite” the population to get the experimental vaccine while at the same time contending that there is no “mandatory vaccination.”

This is a half-truth: technically, there are no fines or sanctions in the Netherlands for those who refuse to get one of the E.U. authorized “vaccines” (Pfizer, Moderna, AstraZeneca, and Janssen). But for the population, and in particular for young people, having to present a pass with a test less than 24-hours old for ordinary acts of life is much more than an incentive: it’s coercion.

The mainstream media in the Netherlands are unabashedly promoting the move. And they are giving only token attention to the jab’s adverse effects. RTLNieuws quoted a 51 year-old woman, Hillegonda, had so many problems after her first jab in June – hair loss, difficulty swallowing for more than a week, continuous coughing – that her doctors advised her to get her second dose in hospital.

Not unsurprisingly, she does not want to take the risk. But she can find no authority that is prepared to confirm that she should get an exemption from the upcoming health pass.

The NOS – the publicly funded television station – recently invited a pediatrician and epidemiologist, Patricia Bruijning, who explained that the pass measure aims to “hold the number of infections in check.” Speaking of the two million teenagers and adults who have not received the jab, she stated: “If all those people all get sick at the same time, we’re going to face a lack of IC beds once again.”

Her statement was not challenged despite its absurdity: obviously all the people in this segment of the population would not fall ill at the same time, and a number of them surely have natural immunity which is not being taken into account beyond six months anywhere in the E.U.

Nor are many commentators clearly noting in the mainstream media that the vaccinated can catch the virus and spread it to others. Many explain that the objective is to allow “fragile” people to enjoy cultural and social outings by obliging non-vaccinated people to show their COVID status, although they are obviously in good health.

None stress that vaccination does not offer true protection to the fragile because there are many breakthrough infections in people who can in turn infect others. Nor are there public health plans in the Netherlands inciting frail people, for whom COVID is a potentially life-threatening infection, to strengthen their immune systems with vitamins – vitamin D in particular – while simple drugs such as ivermectin, hydroxychloroquine, azithromycin, supplements such as zinc and vitamin C, and plants such as artemisia, widely-used in Africa, are still not being recommended for the ill.

In neighboring Belgium, where the health pass is also required (as in Italy, Switzerland, and many locations in Germany, despite low infection and mortality rates), it was impossible up to a recent date to disactivate a “COVID Safe Ticket” for vaccinated individuals who had breakthrough infections: its developers simply hadn’t considered the possibility of this happening.

In the Netherlands, the government has decided that attaining collective immunity will require 90 percent of the adult population having been vaccinated (against about 85 percent at present). The Outbreak Management Team is even quoting a 95 percent vaccination rate among the adult population. The sanitary pass is being touted as a “temporary” measure, but all the signs point to the fact that it will not be scrapped when the sanitary conditions get better – they are already quite good and improving – but when the proportion of vaccinated individuals shall be deemed satisfactory.

Given that the European Union has pre-ordered enough doses to give up to six or seven booster shots to the entire E.U. adolescent and adult population, this can go on for a very long time.

Countries such as the U.K., which has forgone the sanitary pass under public and parliamentary pressure, or Denmark and Hungary, which scrapped it when infections and hospitalizations went down, have not actually set their populations free.

All are stressing that if a new “wave” of infections, however that is defined, should set in, sanitary passes are a tool they will not hesitate to use.