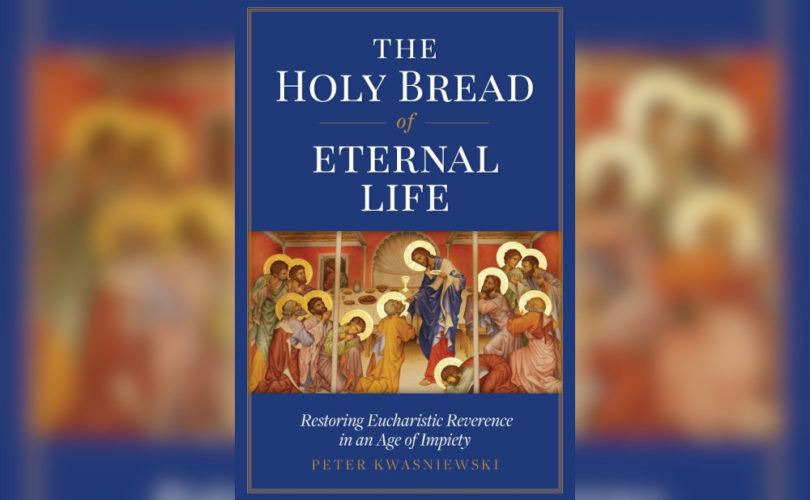 May 10, 2021 (LifeSiteNews) — “Imagine eating the sun — and imagine you could do it without perishing,” writes Dr. Peter Kwasniewski in his 2020 work The Holy Bread of Eternal Life: Restoring Eucharistic Reverence in an Age of Impiety.

This engaging beginning is typical of the prolific author’s creativity in helping readers to grasp sophisticated theological concepts. Kwasniewski, one of LifeSite’s regular columnists, is best known for his erudite works of liturgical scholarship. Here, he turns his attention, and ours, to the Most Blessed Sacrament of the Holy Eucharist.

The book is largely drawn from Kwasniewski’s previously published essays on the Blessed Sacrament, an interview with LifeSiteNews’ own John-Henry Westen, and a paper by Bishop Athanasius Schneider. Topical as ever, Kwasniewski’s essays include peppery correspondence with, for example, spokesmen for Cardinal Donald Wuerl. The work as a whole is inspired by Kwasniewski’s devotion to the Holy Eucharist and his dismay at its constant profanation throughout the past five decades. Both Kwasniewski and Bishop Schneider pull the chair out from under our cozy confidence that abusing the Eucharist can’t actually hurt Jesus: Both men present arguments that, in a mysterious way willed by Christ Himself, yes, they actually can.

But these alarming warnings come later in the book. Kwasniewski begins his three-part work by encouraging belief in, and love of, the Blessed Sacrament, using his enviable talent for fresh and arresting imagery, like consuming the sun. The author finds this idea no more astonishing than the reality of what Catholics are doing when we receive Holy Communion.

He writes, “When we receive Jesus in the Most Blessed Sacrament, we receive the source of all supernatural light and warmth, the light of truth, the heat of love, for indeed He is the ‘Sun of Justice’ … That we are not killed instantly by this contact with eternal and infinite Fire is, in its own way, a greater miracle than would be eating the sun …”

This is the starting point of Part 1, and therefore, given what is at stake, it is not surprising that by Chapter 2, “What Christ’s Body Does for Us”, Kwasniewski’s writing becomes infused with both piety and polemics, asking of us, like a fiery preacher, if we appreciate Christ’s gift of Himself and hinting that those liturgical innovators who take the gift for granted are the successors of Judas.

Kwasniewski is clearly exasperated by abuses of the Eucharist, and as the book serves up course after course of Scriptural and traditional teachings about the Blessed Sacrament, it becomes increasingly difficult to find fault with this. As Kwasniewski shows, St. Paul himself warned about the acute dangers that follow unworthy reception of Holy Communion, and so it is indeed shocking, not only that notoriously pro-abortion politicians and others in a state of mortal sin dare to take the Sacrament, but also that so few clergy echo his warnings.

Parts 2 and 3 discuss the various ways in which Catholics habitually profane the Eucharist. In “Why We Should Receive Communion Kneeling and on the Tongue,” Kwasniewski cites both Scripture and the theology of St. Thomas Aquinas to underscore that when laypeople stand before the Son of God and take Him into their unconsecrated hands, they are acting as if they were His equals and perfectly capable of spiritually feeding ourselves. The author stresses here and elsewhere that this now-ubiquitous practice was born in a stone-cold act of eucharistic disobedience. He also sets out the evidence that current communion practices are not, in fact, a return to any ancient form. Whether or not it is actually a sin to receive Holy Communion on the hand is a controversy Kwasniewski seriously considers. Forcing people to do so, he argues, is a form of clerical, indeed episcopal, misconduct.

Kwasniewski does not let the bishops off lightly. Indeed, his book suggests that the bishops are involved, consciously or unconsciously, in a scheme to “sing a new [false] church into being,” as the song almost goes. In Chapter 18, the author introduces Stateside readers to the heart-breaking scandal of an English bishop forcing famously tradition-minded priests to grant Holy Communion on the hand. Kwasniewski believes that such directives, clear violations of canon law, are meant “to break people’s spirits, to make them violators of the sacred [and] to shatter the spiritual sensitivity that rightly causes thoughtful laity who believe in the Real Presence to hesitate to take the Host into their own hands as the ordained priest does and to feed themselves.”

COVID-19, he argues, is no excuse for eucharistic abuse, and its “liturgical claptrap and rigmarole is a powerful engine of disenchantment” eroding belief in the sanctity of the Blessed Sacrament. (Although outraged by the 2020 pandemic of liturgical abuse, Kwasniewski’s sense of humor leads him to call the past 14 months “Coronatide,” a neologism I hope passes into common use.)

Traditionalists are often accused of anger — of being the proverbial Mad Trads — and certainly even righteous anger can be exhausting. This is why I recommend that readers leave Kwasniewski’s Preface for last, even after Bishop Schneider’s lacerating “Sins against the Blessed Sacrament and the Need of a Crusade of Eucharistic Reparation.” The Preface, which begins with a burst of anger and worry — and was presumably written right after the author read his entire text — put me off reading the book for weeks. There is only so much room in the emotional budget for other people’s anger, no matter how justified. However, had I not picked up the book again, I would have robbed myself of an excellent Eucharistic education, one which included such gems as Kwasniewski’s illuminating essay on Leviticus, a book of the Bible I will never again think dull.

— Article continues below Petition —
PETITION: Call for Vatican to rescind restrictions on private and traditional rite Masses at St. Peter's
Show Petition Text
19362 have signed the petition.
Let's get to 20000!
Thank you for signing this petition!
Add your signature:
Show Petition Text

Ultimately, I dedicated an hour a day to Kwasniewski’s work of Eucharistic theology and, as always, I found the experience of reading his thought deeply educational and a feast for mind and spirit. It is so rich and so full of intellectual nourishment that I recommend reading only a chapter or two a day, in order to properly digest it all. This diet will also keep the repetition of themes, notably the inadvisability of giving Holy Communion on the hand, from becoming obstacles to enjoyment. Repetition is a crucial teaching device, but it does need to be spaced out over time.

The book is for everyone interested in what the Catholic Church teaches about the Blessed Sacrament of the Holy Eucharist and the contrast between Eucharistic practices before and after the “spirit” of the Second Vatican Council (if not its actual documents) swept the world. Naturally, those who most need to read it — bishops, liturgical innovators, extraordinary ministers of Holy Communion — will probably find The Holy Bread of Eternal Life uncomfortable reading. However, there are many passages of Scripture that also have the power of a smack in the face, and as Kwasniewski so brilliantly illustrates, deliberately cutting them out of the liturgical books was a very bad idea.