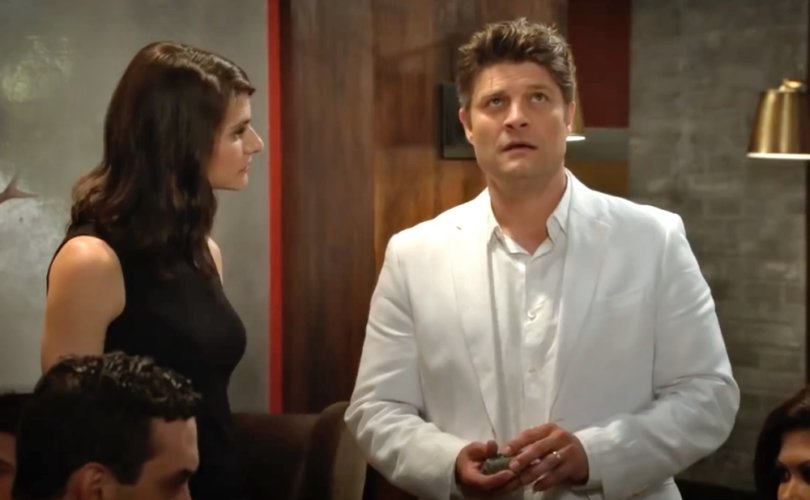 HOLLYWOOD, California, February 14, 2018 (LifeSiteNews) – CBS is launching a new show that mocks the Bible by portraying a modern man living his life strictly according to a literal interpretation of Old Testament Jewish laws.

“Living Biblically” stars Jay R. Ferguson as Chip, a happily married newspaperman who is a fallen-away Catholic. When his best friend dies and his wife announces she's pregnant, Chip realizes his life is at a crossroads. He has an epiphany when he comes across a Bible and decides to live his life following the Old Testament Laws of Moses.

“I've decided to live my life 100 percent by the Bible,” Chip states in a preview of the show, to which the Catholic priest he is talking to in the confessional, portrayed by Ian Gomez, laughs hysterically.

The show, which premieres later this month, is based on A. J. Jacobs book “The Year of Living Biblically” in which the author recounts his quest to follow the Bible “as literally as possible.”

In the show, Chip lives according to a literal interpretation of the Old Testament. He does not wear clothes of mixed fibers. He does not shave his beard. He must stone adulterers.

The show's humor results from Chip attempting to follow ancient Jewish laws in a modern setting.

For example, faced with a co-worker bragging about committing adultery, he asks his Catholic priest what to do. “The Bible says to stone adulterers,” Father Gene inaccurately advises Chip.  So Chip throws a rock at the head of the adulterous husband, hitting him in the face.

Jesus’s message of forgiveness to the woman caught in adultery is, of course, absent from the show.

As a result of this strawman portrayal of following the Christian Bible, the main character is every negative stereotype falsely associated with Christians, particularly judgmentalism, violence, and an eagerness to condemn others.

Based on trailers for the show, Chip’s approach to the Bible is anything but Christian.

Christians believe that the Old Covenant with its animal sacrifices and ritual rules was given to the Jewish people by God for a certain time to prepare the people for the coming of the Messiah. The Old Covenant did not contain the full revelation of God. When the Messiah came, whom Christians believe to be Jesus Christ, those sacrifices and rules were superseded by a New Covenant, God's full and final revelation of love for all mankind.

Christians are also careful to distinguish the laws that are universal and timeless, such as the Ten Commandments, and those laws that Jesus taught are of a more human origin, such as Moses allowing divorce “for your hardness of heart.”

Based on “Living Biblically” trailers, it seems that the main problem with the show is that it treats ritual and purification laws as if they were timeless moral values in order to mock the entire Bible as foolish, laughable, and impossible.

It fails to respect the Christian belief that God revealed Himself progressively, from the simple acknowledgement that there is only one true God, to a system of sacrifices for sin (teaching the Israelites that sin has consequences), to the prophets’ revelation of God’s higher desire for “mercy and not sacrifice,” to the ultimate and final revelation of God through Jesus Christ. It is Jesus who revealed that God is love and showed what it means to truly love God and neighbor.

In making a show that essentially mocks God as lawgiver, the show is bound to offend people of many faith traditions, including Christians, Jews, and Muslims.

“I don’t think there is any scenario where the show wouldn’t bother someone,” said fellow Executive Producer Patrick Walsh when asked about the show. Unfortunately, he is probably 100 percent right.

1
Abp. Viganò: The COVID pandemic farce served as a trial balloon for the New World Order
2
Eugenics rebranded: How the globalist’s transhumanist plan will destroy life as we know it
3
‘Died Suddenly’: Documentary shining light on fibrous clots goes viral
4
Prominent doctors launch lawsuit against the FDA over suppression of ivermectin to treat COVID
5
Priests for Life to host day of mourning for baby whose abortion death was played on NPR
Subscribe to Daily Headlines »