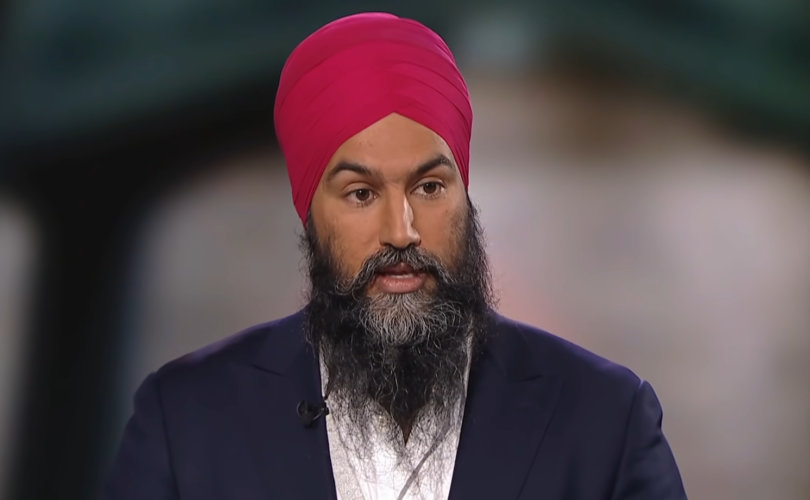 (LifeSiteNews) – The New Democratic Party (NDP) of Canada has become nothing but a shill for Justin Trudeau’s Liberals, and by doing so is damaging the party’s legacy and Canada at the same time.

After supporting the implementation of the insane Emergencies Act in February, the NDP under Jagmeet Singh struck a handshake deal with Trudeau to ensure his party would retain House confidence until as late as 2025.

Since then, Singh has spent a lot of his time blasting Trudeau’s Liberals on Twitter for their failings, giving the impression that he does not see the irony in blasting the regime he is propping up.

Under this Liberal government, rising costs have hit an almost forty-year high.

But it isn’t the wages of hard-working people that are driving inflation.

In 2011, the NDP defied all expectations and became the official opposition to the Conservative government under Prime Minister Stephen Harper. The monumental growth of the party was called the “orange wave.”

At the helm was the very likable Jack Layton, a man who is since deceased and who many believed was a sincere and honest Canadian patriot, albeit leftist in his economics.

Now, it should be noted, that Layton was no saint. In fact, it is likely he had a dalliance with a prostitute as a young man. In no way should the reader confuse anything kind said about Layton as kind things said about his morals or personal life. Like Donald Trump, for example, there were demons and skeletons in the closet. That being said, his public persona was a positive one and an energetically likable one that resonated with sane working-class Canadians.

Layton was something of a folk hero in Canada, with even right-wingers able to smile when hearing him speak, and you did not get an impression from him that he was a “politician.” He was an old-school political actor, and for all his naivety about economics and social programs, it did really seem like he loved Canada and believed it to be a good place.

He represented the long-standing ethos of the NDP, which is to say a political party/movement that was collectivist and communitarian with the intention to help the everyman and working class get a seat at the table.

If we are being kind, we might say that the average NDPer of the past was a “union type” but in the good sense – if there still exists a good type of union – and often represented the best of the co-operative spirit of Canadian industry.

However, just a decade later, the NDP has descended into a pit of identity politics and has gone from economic leftism to full-blown Marxist mania.

If Layton was the most likable man in Canadian politics, then Singh might be the least-liked man in the history of Canadian politics. His speeches are incoherent, and it often comes off as if he only has disdain for the country that employs.

In June 2021 after a horrific event wherein a deranged nut-job ran down a family of Muslims in London, Ontario, Singh used the opportunity to say that “our Canada is a place of racism.”

All of Canada was horrified at what had happened, but apparently to Mr. Singh this is just proof that we are racist … you know, because racists are horrified when bad things happen to other races …

Singh’s insinuation that the entire nation was racist, which is made even more absurd considering Singh is Sikh and not European in his ancestry and is the head of a major political party in the country. Some racist country!

Compare this instance of calling Canada racist – and there are a million others we could pull from – to how the late Jack Layton dealt with race issues, and the difference could not be clearer.

In 2011 during the election campaign, a Quebecois politician from the Bloc Quebecois opined that since the NDP had an aboriginal candidate in northern Quebec that they would not be voted in due to race. Today’s NDP leader would – I imagine – agree with this and call everyone racist in order to score woke points.

However, Layton rang the racism bell but in the opposite direction, challenging the Bloc politician for suggesting that the people of that riding were racist. Layton believed it was wrong to call Canadians racist and to assume they would not vote for an indigenous candidate, whereas Singh believes this nation is racist to its roots.

At war with NDP history

Prime Minister Justin Trudeau is not the only Trudeau to have implemented national emergency powers to deal with a domestic problem. His father, Pierre Elliott Trudeau, used the progenitor of the EA – the War Measures Act – to squash a radical and violent Quebec separatist movement that resulted in the death of a Quebecois politician at the hands of the revolutionaries.

It is doubtless that the younger Trudeau’s usage of the emergency powers was unfounded, considering the peaceful nature of the Freedom Convoy, but the argument could be made that the elder Trudeau had reason to use such powers. After all, the Quebec Liberation Front group that had committed political murder was becoming a national problem and had proved to be violent.

However, there was a voice crying out in the wilderness against Pierre Trudeau’s decision to use the powers, and it was none other than former NDP leader Tommy Douglas.

Douglas delivered a harrowing speech on October 16, 1970 in opposition to the War Measures Act to a rowdy House of Commons.

In the speech, Douglas expressed clear disdain for any domestic vigilante violence but blasted Pierre Trudeau’s Liberals for grabbing too much power.

He decried the government’s attempt to deal with the issue with such immeasurable power when they already had the tools to deal with it differently. His speech sounds much like the objections to the younger Trudeau’s invocation of the EA.

Douglas was particularly concerned about infringements on civil rights and the overreach of government power. “This government now has the power by Order in Council to do anything it wants — to intern any citizen, to deport any citizen, to arrest any person, or to declare any organization subversive or illegal,” he said. “These are tremendous powers to put into the hands of the men who sit on the treasury benches.”

When war-time powers were invoked under current NDP leadership, Singh could only bring himself to decry what might amount to a usurpation of civil rights for “Indigenous land defenders, climate change activists, workers fighting for fairness,” whatever that means. So, for Mr. Singh, there are certain groups of Canadians that deserve to be free from massive government overreach, but the rest of us do not.

I am not a fan of the current NDP, and much could be written about how the collectivist spirit of the NDP over the years has helped establish a Marxist group think in the part and politics as a whole in this country.

However, it is clear that under Jagmeet Singh the NDP has become a stain on Canadian politics that now only serve to prop up a tyrannical regime.

We would all be better off if the NDP could recapture the spirit of Douglas and Layton and attempt to serve their country rather than destroy it.