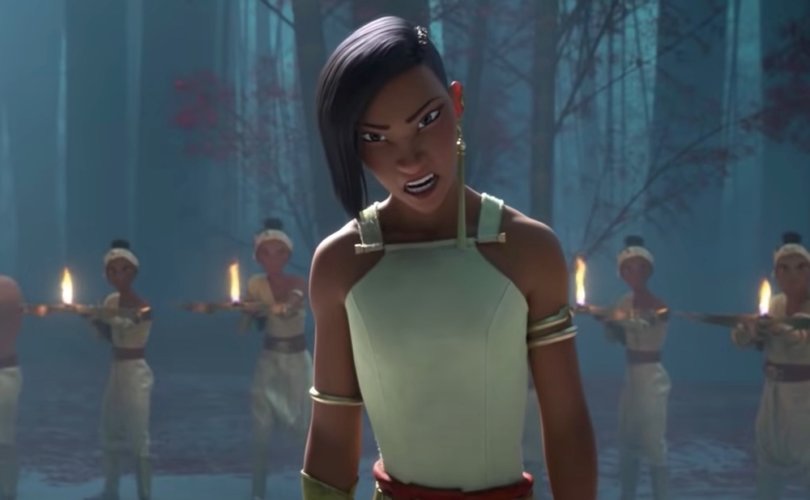 March 11, 2021 (LifeSiteNews) – Raya and the Last Dragon, Disney’s latest full-length animated film, looks in many ways like a liberal propagandist’s dream come true. Set in South-East Asia, it’s the tale of a lone warrior princess, Raya, whose mission is to find the “last dragon” who alone can save the entire world from its evil, elusive enemy – the shapeless, cloud-like “Druun” monsters that she calls a “mindless plague.”

In a way, Raya personifies China. But not an aggressive China, seeking dominance over the world: her message is one of unity and tolerance, of trust and faith in humanity in difficult times. Does this ring a bell in these times of COVID? It should, because Raya and the Last Dragon is a didactic film, a story with a moral.

A brief synopsis is necessary in order to understand how the message works. Raya is born into a land fraught with division and rivalry among five tribes. Once prosperous and united Kumandra, 500 years ago, was the dwelling-place of dragons who lived in perfect harmony with humans, and brought them water, rain, and peace.

But hatred and envy among humans created “the Druun” that brought division and destruction to dragons and humans alike: the latter, it turned into statues of sand or stone; the former were virtually made extinct by the maleficent cloud. Only one survived, thanks to the other dragons’ sacrifice who put their magic together to create a crystal orb – the dragon gem – where Sisu, the last dragon would remain.

Five hundred years on, the hatred among humans and their tribes reawakened “the Druun,” and Raya, the princess, whose father made her the guardian of the dragon, must save her kingdom now that the gem has been broken and dispersed among the rival tribes. This she will do by finally joining forces with her arch-enemy, Namaari, a princess from another tribe. Their mutual trust and cooperation ultimately ensure the happy end, in which dragons will at last be honored and Kumandra united.

There are many obvious allusions to contemporary issues and so-called solutions. Before coming back to those, however, the first disturbing element of this new Disney film is its portraying of dragons as good creatures, helpers of humanity and saviors of the world. In an important book, A Landscape with dragons, Michael D. O’Brien identified an increasing and worrisome trend in children’s literature: the bonifying of symbols of evil – among whom dragons play a leading role as images of the devil in so many countries, and especially in Christian countries – who are portrayed as good, kind, and unjustly rejected.

The role of traditional symbols is not trivial: they express profound truths and turning them upside down has consequences. O’Brien shows that, in many contemporary children’s books, the use of disobedience, trickery, magic, and other unacceptable evils are necessary to the own ultimate success or victory of the book’s main characters – the Harry Potter books are a good example of this. The pervasiveness of “good” dragons in present-day cultural products for children is surely a sign of this inverted culture, that deliberately turns the archetype of danger, greed, and destruction into a misunderstood, persecuted victim of false virtue-signalers.

Much the same argument was used in another disturbing children’s film,  Maleficent: Princess of evil, where “fallen angels” were relegated to under-earthly caverns after being unjustly rejected by mankind, while Maleficent herself turned out to be a necessary collaborator for saving the “environment.”

In Raya, Sisu the dragon is a cute, furry (but horned) creature with a taste for rap music and a self-sacrificing nature, and the improbable source of good and peace.

But the indoctrination does not end there. The choice of a female heroine without a “love interest” (Raya thrives on her friendship with Sisu and later Namaari) is one of the main themes. Thus, female heroines triumph against masculine power politics and rivalry. Collective intelligence is another: Raya and the Last Dragon aims to show the necessity of cooperation against the common enemy.

Was Raya written before the COVID-19 crisis with extraordinary foresight? Or was it adjusted to fit the present narrative that insists that the world must unite against the invisible enemy or else be doomed? Whichever way, the result is the promotion of globalism: men must unite and abolish frontiers in order to save themselves and the planet.

Original sin is also present in a deformed way, with the story about peace and harmony being lost because humans turned against dragons who give them water and rain, necessary material elements for life to prosper. Nor is it unconceivable that the reference to “the Druun” evilly turning dragons and men into statues of stone is a wink to the transformation of Lot’s wife into a pillar of salt when she turns back with nostalgia to the city of Sodom.

The environmental element is also present: turning the desert into a fertile land is one of the outcomes Raya’s heroism will obtain.

As to the “Chinese” element, it was underscored earlier this month by the LoyolaPhoenix, a student newspaper of Loyola University in Chicago.

“Raya and The Last Dragon is a timely film that encourages global internal reflection on what it means to unite for the greater good. In the last year, the world has been not only plagued by COVID-19, but a heightened anti-Asian sentiment,” wrote Epiphany Johnican.

The article goes on to say:

Although not yet announced as an official Disney princess, Raya doesn’t have a male love interest like many of her predecessors — rather, her sole ambition is to save her kingdom. The main hindrance throughout her journey is the antagonist, Namaari, a princess of another kingdom. The push and pull of these two characters represent the consequences of women settling in division instead of uniting for the greater good.

The strong themes of trust and unity in this film couldn’t have come at a better time. Asian Americans have been facing greater levels of racism since the outbreak of the COVID-19 virus, to which some accredit to former President Donald Trump who called it the “kung-flu” or “Chinese virus.”

Hate crimes motivated by anti-Asian sentiment jumped 2,600 percent in New York City from 2019 to 2020, according to city records. The spike in attacks has led to the creation of the New York Police Department’s Asian Hate Crime Task Force, which has been under criticism by community members recently for its crime response.

The author speaks of the film’s lesson about “believing in yourself,” and concludes that the film could be “a possible catalyst for progressive conversation.”

Producer Osnat Shurer responded to questions about the film’s meaning in much the same spirit: “You look around at the world and you see that people are using our differences as a way to divide rather than to come together to embrace it,” he said.

Screen Rant went even further in an interview with Raya directors Don Hall and Carlos López Estrada, drawing a parallel between the film’s message and Joe Biden’s inauguration speech.

Don Hall told Screen Rant: “Obviously, the film was in development in different iterations for quite a while, and it felt like there was always a gravitational pull to the idea of unity. I think one of the issues that we saw with that, is that it was almost too broad a theme. What we did is just ask the question, ‘In order to achieve unity, who do you trust?’”

His alter ego, López Estrada, added: “We were joking yesterday, ‘Qui [Nguyen, the movie’s co-writer], did you write Biden's inauguration speech?’ Because so many of the ideas that he’s talking about and the general philosophy that he’s using to approach his new presidency is so in line with many of the things that we’re trying to talk about in the movie. It’s nice to know that we're going to be part of a hopefully very optimistic conversation.”

The interviewer comments: “A key interaction in the trailer seems to underscore unity is especially relevant to Raya and Sisu. Raya says the world is broken and she can’t trust anyone, prompting Sisu to suggest it’s broken because Raya (and others) don’t trust anyone.”

The message, in a word, whatever our cultural and other differences, is human fraternity. Of which we’ve been hearing rather a lot lately.