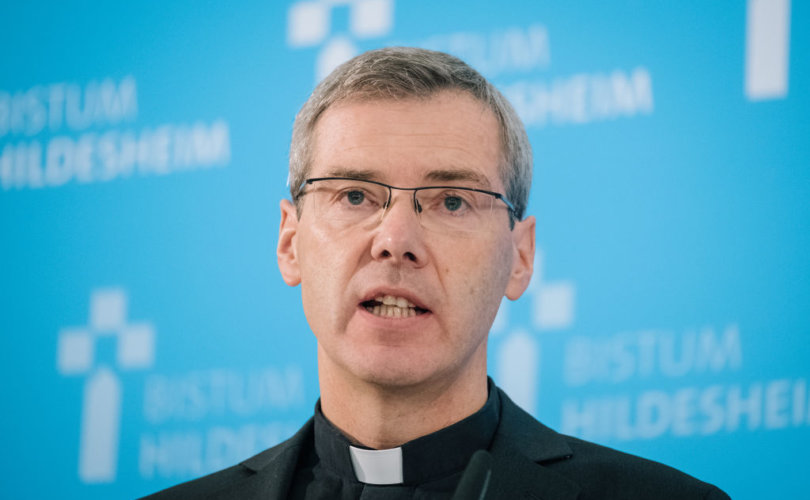 December 20, 2018 (LifeSiteNews) – The new German bishop of Hildesheim, Heiner Wilmer, has given an interview in which he says that in light of the abuse crisis, an “abuse of power is in the DNA of the Church,” adding that “we have to say goodbye” to the claim that “the Church in herself is pure and immaculate.”

At the same time, this prelate states that Eugen Drewermann – a laicized priest who was disciplined by Rome for his heretical teachings and has now left the Church – has written “prophetical” books.

Speaking with the regional newspaper Kölner Stadt-Anzeiger in a Dec. 13 interview, Bishop Wilmer comments on the current abuse crisis and states: “I believe the abuse of power is in the DNA of the Church. We cannot any more shrug this off as something minor, but we have to rethink (the hierarchy) in a radical way.” However, the prelate says, “we do not yet have any idea of what the consequences should be for theology.”

Part of the bishop's proposal to rethink Catholic theology includes the doctrine that the Catholic Church is holy – one of the Four Marks of the Church. He explains: “In the future, we will only then be able to confess the faith in the 'holy Church' when we also confess at the same time: This Church is also a sinful Church.” Catholic doctrine holds that the Church is the mystical bride of Christ who has been made to be spotless and holy because she has been purified and sanctified through the blood of Christ. It is her members, men and women who are still striving after such holiness, who are the cause of scandal and suffering in the Church.

Heiner Wilmer had been nominated by Pope Francis to become the bishop of Hildesheim in April of 2018. Previously, he was the superior general of his religious order, the Priests of the Sacred Heart of Jesus, in Rome.

When the interviewer states that “already the Church Fathers called the Church a 'casta meretrix' (“chaste whore”),” the German bishop responds with “yes.” But later, Wilmer continues, this idea seemed “unbearable” to the “dominating doctrine,” and it got lost. “Instead, one then claimed that there are in the Church individual sinners, but the Church herself is pure and immaculate.” After describing the Church's teaching on the nature of the Church, Wilmer concludes: “We have to say good-bye to this and accept that there are 'structures of evil' in the Church as a community.”

It is in this context that the interviewer, Joachim Frank, comments that the German theologian and psychoanalyst, Eugen Drewermann, himself wrote a trilogy about the same topic and with the same title – Structures of Evil (See here for a short overview in English). Wilmer responds, saying: “I have read it all. Today, one has to say that it was prophetic. As it is the case with Drewermann's book Clergyman: Psychogram of an Ideal, Eugen Drewermann is a prophet of our time who has been unappreciated by the Church.”

Eugen Drewermann is a laicized priest who, due to his questioning of essential dogmas of the faith, such as the Virgin Birth, the Resurrection, and the Ascension (which he did not understand in any literal way), had been disciplined by the Church in the 1990s. In 1991, his teaching license was removed; in 1992 he was forbidden to give homilies; and in the same year, he was suspended from the priesthood. In 2005, he made it public that he had left the Catholic Church altogether.

With reference to Drewermann, Wilmer says that “we also need today such men and women who kick us bishops with their feet, even if it hurts very much.”

Further commenting on the need to reform the Catholic Church, the German bishop claims that “any triumphalism, any thinking in terms of entitlements, has to fall. We bishops are sitting, according to my feeling, still on a high horse.” The bishops are to be more on the same level as the people, but even “'face to face' is not enough. We need a 'side by side.'”

“I sometimes wonder: who is really determining what is Catholic? We still act as if that's the hierarchy, as if we bishops own the label Catholic. Wrong!” According to Wilmer, “we have to become receivers, listeners,” “also with people from other confessions and with those who do not believe.” He further claims that the Church needs a system of “checks and balances” in order to “control the power in the Church.”

These comments by Bishop Wilmer have caused much resistance among faithful Catholics, theologians, and journalists.

First of all, Paul Badde immediately responded for Catholic News Agency Deutsch, pointing out that the Church has been declared to be holy since the Council of Nicaea in 325 AD. If one were to follow the logic of Bishop Wilmer, says Badde, one really should say that not only the Church today, but the Church from its beginning had to be “contaminated,” that is to say by Our Lord Himself, who founded the Church with His Blood. But then, argues the German journalist and Rome Correspondent, that means that Our Lady who gave Him her blood, must also have been tainted. “Objection, in the name of the (Blessed) Mother,” is Badde's comment.

Armin Schwibach, Kath.net journalist and professor of philosophy in Rome, comments for LifeSiteNews on Wilmer's statement, pointing out that there are not “many Church Fathers” (as Wilmer claims) who spoke about the “casta meretrix,” but, rather, only one: St. Ambrose. Quoting Cardinal Giacomo Biffi, Schwibach makes it clear that even St. Ambrose did not have a sinful Church in mind, on the contrary. Biffi explained that this expression actually meant a holy Church that is leading people to follow the bridegroom (casta), unto holiness. That is to say, “it means just the opposite,” explains Schwibach. St. Ambrose had meant to compare the Church with a woman from the Old Testament (Rahab, the harlot of Jericho) who saved the Israelites.

“That is to say: especially because she is holy – the holiness that comes to her from Christ – the Church can welcome sinners and suffer with them in their sufferings and cure them,” says Schwibach. “It is just unbelievable,” he comments on Wilmer's words.

Dr. Markus Büning, theologian and book author, told LifeSiteNews that Wilmer's statement is “clearly contrary to the teaching of the last Council. In Lumen Gentium No 8 it is clearly stated that the Church, from her essence – that is to say, by the founder's intentions – is holy. But in her, sinful men are assembling who wish to receive one thing: sanctification and redemption from evil!” Therefore, says Büning, “the DNA of the Church is her holiness which she receives from Christ.” He rejects the idea to use the abuse crisis as an occasion to “demand a paradigm shift in ecclesiology.”

Moreover, Dr. Büning also refutes the idea of “checks and balances” for the Church, which would, in his view, terminate the essence of the Church. “All power is in the hands of the founder of the Church, Jesus Christ. He has given the hierarchical office to Peter and the Apostles and their successors, exercising this spiritual power.” Adding a strong comment, he says: “He who wants to change this, is not anymore one thing: Catholic!”

Further commenting on Wilmer's praise of Drewermann as a prophet, the German theologian says that such a man “cannot be taken seriously. Such a statement from a bishop leaves me only with one response: perplexity and pity!”

The German journalist Peter Winnemöller, commenting for Kath.net on the matter, calls Wilmer's praise of “the esoteric Drewermann” “cynical.”

For him, the statements of Wilmer “definitely need to be checked by the Congregation for the Doctrine of the Faith.”

“It is not acceptable that a bishop very openly undermines a sentence of the Creed,” he says, with regard to Wilmer's claims about the purported DNA of the Church. As the journalist points out, Wilmer misinterprets the words of St. Ambrose on the “casta meretrix” in “a nearly diabolical way,” since this Church Father used this expression in order to speak about the intrinsic holiness of the Church.