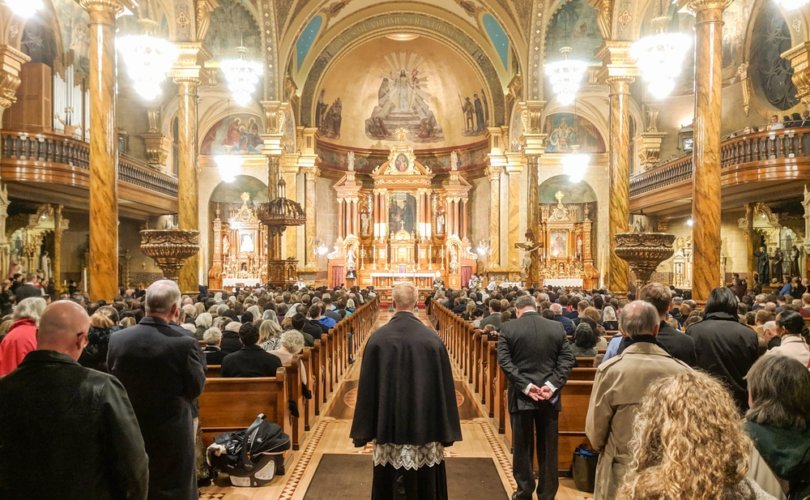 April 30, 2020 (LifeSiteNews) — Markus Graulich, a canon law expert and under-secretary of the Pontifical Council for Legislative Texts, told the German Catholic newspaper Die Tagespost that he sees no danger coming from the new Vatican inquiry about the situation in the dioceses worldwide with regard to Summorum Pontificum, Pope Benedict XVI’s motu proprio enjoining bishops not to forbid the traditional Latin Mass. Graulich now proposes that those groups who cherish the traditional Mass should help their bishops in answering the questions as sent out by the Vatican.

As LifeSite reported on March 24, Cardinal Luis Ladaria Ferrer, the head of the Congregation for the Doctrine of the Faith (CDF), had written on March 7 a letter to the presidents of the bishops’ conferences worldwide, asking them to answer a set of questions concerning the implementation of the Summorum Pontificum, which Benedict at the time called the “extraordinary form” of the Roman Rite. According to Summorum, any diocese with sufficient demand from the faithful must offer traditional Mass.

Cardinal Ladaria attached to his March 7 letter nine questions, asking the bishops to say how the situation is with regard to the traditional Latin Mass in their dioceses and whether the practice of it “corresponds to a true pastoral need” or whether “it is promoted by a single priest.”

The questionnaire also asks whether there are “positive or negative aspects” of the traditional Latin Mass. The CDF also wants to know whether other sacraments are being administered in the traditional forms, whether the seminarians are being influenced by it, and whether the Roman Missal of the year 1962 has been in use in this rite. The ninth question reads: “Thirteen years after the Motu Proprio Summorum Pontificum, what is your advice about the extraordinary form of the Roman Rite?”

Many Catholics are concerned that this new initiative on the part of the Vatican could lead to a suppression of the traditional Mass, or that the answers of the bishops worldwide could lead to a reduction of these Masses in the world.

However, Dr. Markus Graulich, a canon lawyer and Vatican official, reassured Catholics that this is not the case. “In my opinion,” he tells the Tagespost, “it is about an assessment of the situation, a survey, not more and not less.”

He also denies some reports that the section of the CDF responsible for the traditional Mass communities had been excluded from the formulation of the questionnaire and request.

He now proposes that those groups who cherish the traditional Mass help their bishops in answering the questionnaire concerning Summorum Pontificum. They should provide information that the bishops need.

It was Pope Francis himself who has asked the CDF to undertake such a survey. As the Tagespost reports, already in 2010, there had taken place such an assessment of the situation after the re-admission of the pre-conciliar traditional Mass. At the time, the survey was conducted by the responsible Ecclesia Dei commission.

In response to this new CDF inquiry, Dr. Peter Kwasniewski told LifeSite he is concerned about it but that at the same time, whatever the intentions of this CDF letter, there is no reason to be “nervous.” “If Summorum were negated,” he writes, “it would not change one bit the logic of Benedict XVI’s argument, which is based on natural and divine law, not on ecclesiastical law: ‘What earlier generations held as sacred, remains sacred and great for us too, and it cannot be all of a sudden entirely forbidden or even considered harmful.’ Nota bene: not ‘SHOULD not be forbidden,’ but ‘CANNOT be forbidden.’”

Dr. Joseph Shaw, chairman of the Latin Mass Society of England and Wales, told the Catholic News Agency: “Assuming the CDF receives reasonably complete responses, comparing reports written in 2010 and in 2020 will show not only a steady growth in the number of celebrations, but an increasing and serene integration of the EF [extraordinary form] into the life of the Church, something attributable in large part to the attitude of the bishops themselves.” It will show that people did not lose “interest” in this form of the Roman Rite, as some bishops had hoped, and new bishops seem actually now more “open-minded” about it. One can thus see that “the ancient Latin liturgical tradition continues to have value for new generations,” as “Benedict XVI noted.”