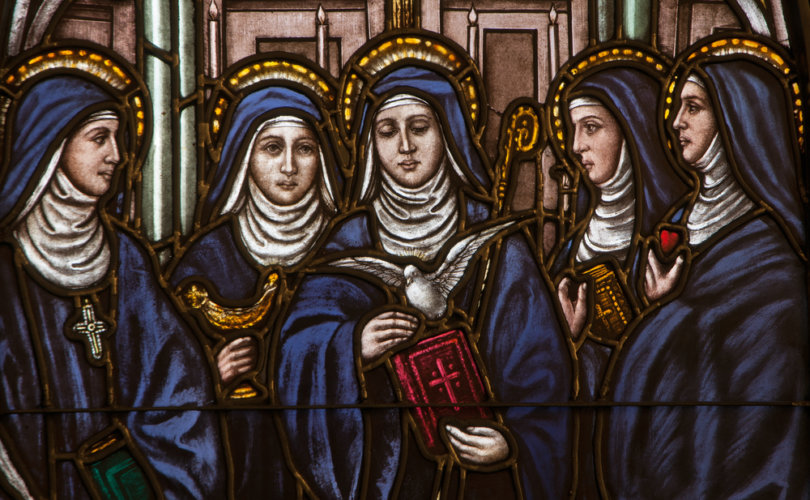 NEW YORK CITY (LifeSiteNews) – In these evil times, outrages against decency are tolerated in a way they were not in the past.

Among these outrages is the blasphemous movie Benedetta, a film that ridicules the sacred vocation of nuns and attacks the honor of Our Lady.

The film producers have exploited the religious setting, premise, and actresses to titillate viewers.

Perhaps the film’s sponsors did not suspect that there would be public outrage. Nevertheless, there have indeed been protests by people who object to the film’s contempt for the sacred.

Among them were the activists and supporters of the American Society for the Defense of Tradition, Family and Property (TFP) soon appeared before theaters nationwide.

On December 4, 2021, volunteers from TFP Student Action traveled to the Lincoln Center in New York City where the film was scheduled to premiere.

The majority of the young volunteers present are graduates of the TFP-run Saint Louis de Montfort Academy and were joined by one of its staff members.

The New York City Rosary rally was one among hundreds held that week in reparation for Benedetta.

The rally began calmly with a few passersby expressing their support or opposition. This quiet beginning allowed the group’s thunderous “Our Fathers” and “Hail Marys” to echo down the street.

Some stared at the campaign perplexed, while others pulled out their phones to record the scene.

However, opposition to the prayers of reparation soon intensified. Hecklers on a nearby elevated walkway shouted unintelligible insults while periodically making animal-like noises.

One yelled, “Hail Satan,” a common salute at these rallies. One even commented that “life would be […] boring without sin.”

Such reactions indicated the kind of people who supported the film.

Apparently encouraged by the walkway protesters’ misbehavior, passersby seemed to adopt their style of public discourse. One cowardly woman shouted insults as she hurried past the protest.

Others simply made an obscene hand gesture in the direction of the TFP volunteers, even feeling the need to capture the moment with their smartphones.

Some shouted that the peaceful protesters were not “truly Christian.” Two women positioned themselves before the protestors to engage in sexual foreplay.

During the Glorious mysteries of the Rosary, a small group assembled across the street and ridiculed the Rosary and the Catholic faith.

Initially, any attempt to answer the mob was met with insulting curses. However, as their tempers slightly cooled, one woman argued that there was nothing wrong with the movie, for she claimed that “most nuns are lesbian.”

When the member asked if she had ever met a nun, she admitted that she had not.

When he explained that the nun’s state in life was to facilitate not the practice of unnatural vice but virginal purity, the group replied by yelling that “virginity does not exist.”

The Rosary was followed by the Litany of Loreto, during which the volunteers loudly emphasized the invocations of “Mother most pure,” “Mother most chaste,” and “Queen of virgins.”

Following the litany, one woman repetitively screamed in a hateful tone that “God loves everybody.” The response from the Catholic side was taken straight from the words of Our Lord: “If you love me, keep my commandments” (John 14:15).

— Article continues below Petition —
PETITION: Appeal to Catholic Leaders to reject abortion-tainted COVID vaccines and mandates!
Show Petition Text
11451 have signed the petition.
Let's get to 12500!
Thank you for signing this petition!
Add your signature:
Show Petition Text

All things endured for Our Lady

One might ask why volunteers would make a tedious trip to New York City just to put up with insults and vulgarities. Why stand out in the cold for over an hour just to be yelled at?

Such a question is answered by Our Lady’s request for penance at Fatima. By standing and enduring such ridicule, one comforts Our Lady, who is the object of this blasphemy.

If a mother is vilely insulted, a good son does all he can to defend her honor, no matter what the difficulty.

How much more suffering should be endured for the Mother of God, who is one’s heavenly mother?

This importance of reparation was emphasized by the TFP’s founder, Prof. Plinio Corrêa de Oliveira.

Using the example of Saint Francisco Marto to reinforce his point, the noted Catholic thinker commented, “His [Saint Francisco’s] mission was purely reparation in the face of the sadness of Our Lord and Our Lady caused by these sins. Reparation was a major part of the Fatima message.”

The Fatima message is mocked by those who paint the world as being “not that bad.” Our Lady’s plea for reparation opposes the normalization of sins like blasphemy and abortion. That is why reparation is so necessary.

The Saint Louis de Montfort Academy, a TFP-run boarding school for boys, likewise participates in defending the honor of Our Lady.

A special act of reparation in progress is the construction of a Lourdes Grotto in atonement for abortion, a project that is now in the fundraising stage on LifeFunder.com.

With sin so widespread, everyone should be involved in acts for reparation. Any sacrifice, however small, can make atonement for the innumerable sins committed daily.

The attitude necessary to us all was perfectly expressed by a TFP Student Action volunteer and St. Louis de Montfort Academy alumnus Kevin Roman.

When asked about the cold and windy conditions during the Benedetta reparation rally on December 4, he replied simply, “It’s part of the reparation, right? Doing penance for Our Lady.”