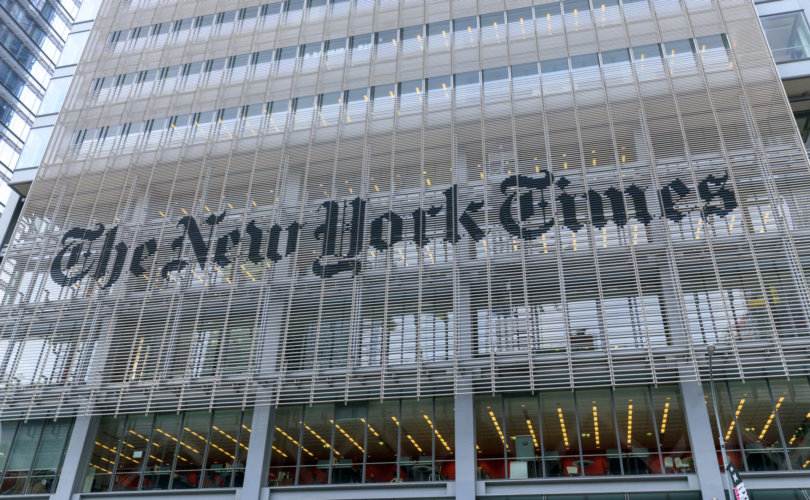 (LifeSiteNews) – It was inevitable, I suppose. Over the weekend, the New York Times published a column titled “A Taste for Cannibalism?” and Twitter promptly exploded. Which is not surprising, given their explicitly stated conclusion, which comes early on in the column: “Turns out, cannibalism has a time and a place. In the pages of some recent stomach-churning books, and on television and film screens, Ms. Summers and others suggest that that time is now.”

Ms. Summers is Chelsea G. Summers, the author of a recent novel titled A Certain Hunger about a restaurant critic who likes to eat the flesh of adult men. Alex Beggs, the column’s author, cites other examples that (to his mind) indicate that we are becoming “delicious to each other.” The 2022 Hulu film Fresh spotlights a fictious underground trafficking in human flesh; so does the upcoming Bones and All. The Showtime series Yellowjackets features a stranded female soccer team resorting to cannibalism. Cannibalism seems a popular topic in recent novels, too—Ottessa Moshfegh and Agustina Bazterrica (in a book titled Tender Is the Flesh) both focus on it.

These creators relish the idea of challenging one of humanity’s most longstanding taboos, and Beggs notes that these plotlines involve “spine-tingling creepiness” and “darkness.” One noted that “we’re often drawn to the things that repulse us most,” with another interviewee stating: “But I keep coming back to this idea of, what portion of our revulsion to these things is a fear of the ecstasy of them?” He did not explain what the hidden ecstasy of cannibalism is, exactly. Future episodes of a show coming to Netflix or Amazon will be sure to let us know.

I suspect that Beggs was simply trying to write a viral column to boost his profile and incite the Twitter mobs, because the evidence he provides for these films, shows, and novels driving a genuine interest in consuming human flesh is almost entirely absent. Here is the corroboration he provides for the flimsy thesis that “the time is now” to begin giving cannibalism a second look:

Bill Schutt, the author of “Cannibalism: A Perfectly Natural History,” says that fictional plots about eating human flesh are as old as literature itself. Pointing to examples that include the man-eating Cyclops in Homer’s “Odyssey,” he said the taboo has artistically been used to horrify for centuries.

“When you take something that is so horrible and put it through this lens of fictionalization,” he said, “we get charged up about it, but we know we’re safe.” At least most of the time: Mr. Schutt only made it halfway through Hulu’s “Fresh” before he had to stop the movie. “It was almost too well done,” he said.

Translation: Cannibalism has been horrifying to nearly everyone, everywhere, at all times, but Hollywood’s pursuit of the perverse has rendered it so realistically that a historian of this practice found himself disgusted. Schutt’s book includes a few isolated examples of cannibalism throughout human history and the infamous practice of the New Guinean headhunters as well as a few serial killers, but these examples scarcely lend themselves to a dark thesis about cannibalism gaining broad interest.

And then there’s this bit:

As to what may be fueling the desire for cannibalism stories today, Ms. Lyle, the “Yellowjackets” co-creator, said, “I think that we’re obviously in a very strange moment.” She listed the pandemic, climate change, school shootings and years of political cacophony as possible factors. “I feel like the unthinkable has become the thinkable,” Ms. Lyle said, “and cannibalism is very much squarely in that category of the unthinkable.”

I have no idea how Lyle gets from noting that we are in a strange moment to cannibalism becoming thinkable without a shred of evidence connecting those two assertions.

— Article continues below Petition —
Parents' Pledge: We will pull our children out of explicit sex-ed classes
Show Petition Text
4696 have signed the petition.
Let's get to 5000!
Thank you for signing this petition!
Add your signature:
Show Petition Text

I suspect the reality behind this new fascination with cannibalism is a boring one. For a couple of decades now, our decadent elite creators have been smashing boundaries, one by one. Every taboo has been sacrificed in the name of art, and there are now millions of people who enjoy watching horrifying, repulsive, disgusting things as entertainment. The entire genre of horror is premised on the idea that people like to kick back to relax with a bucket of popcorn and watch people get gruesomely tortured, dismembered, and murdered—that their very fear and panic is something that can provide pleasure to the viewer. In that context, cannibalism in “art” is just more of the same.

For two years, people sat at home due to COVID restrictions, glued to their screens, glutting themselves on streaming content and pornography. Creators have had to work hard to keep people shocked, and the only way to do that now is to continue further into the darkness that already makes up so much of their content. Rape, torture, incest, every imaginable sexual practice—all of these are already passé. So it was inevitable that at some point, a screenwriter was going to look up and say: “It’s boring if the main characters sleep with each other. What if they eat each other?”