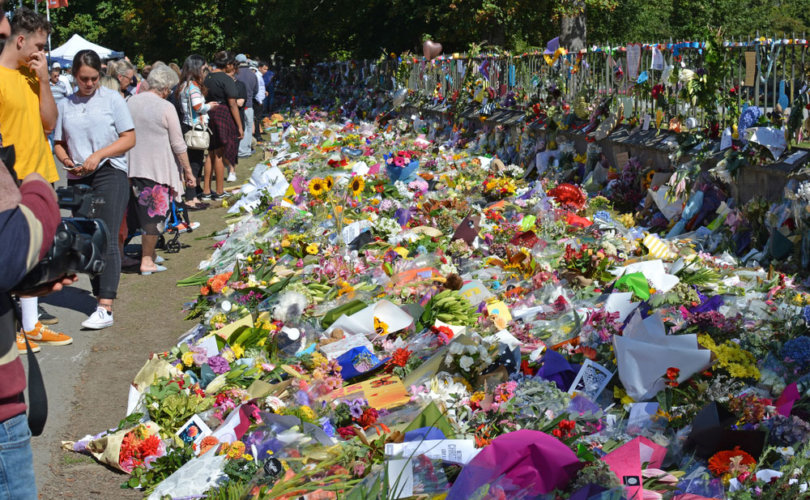 Floral tribute to the 50 people shot and killed at two Mosques on March 15, 2019 in Christchurch New Zealand.Shutterstock

March 19, 2019 (LifeSiteNews) – Robert Spencer of Jihad Watch commented in relation to the following article, “The savage and heinous terrorist attacks on the mosques in New Zealand are being and will be used to try to silence all criticism of jihad terror and Sharia oppression of women and others.”

We should all of course condemn and be horrified by what took place in New Zealand. At the same time we must heed the warning of Spencer and many others that this tragedy will be typically heavily exploited to advance the cause of radical Islam and to grant extra special protections to Islam versus all other religions. All this will go on while the daily persecutions and slaughters of large numbers of Christians continue to be downplayed as they continue in many nations with significant numbers of more fundamentalist Muslims.

We all need to keep in mind the perspectives revealed in this article.

Terrorist attacks against Muslims in the Western world are extremely rare. This morning’s carnage in two mosques in New Zealand, with the death toll currently at 50, is the first major event of its kind since the Quebec City mosque shooting—over two years ago – which killed six persons.

(As for the alleged “Islamophobic incidents” in general, overwhelmingly they are either unverifiable or too trivial to be taken seriously.)

While 56 dead in two years is 56 too many, this regrettable incident will dominate the headlines infinitely more than any comparable carnage involving Christians, notably the 2017 Palm Sunday church bombings in Alexandria; it killed 45 people, and was all but ignored by the Western media and politicians. The developing frenzy of compassion with the victims of Christchurch will result in a number of mathematically predictable consequences:

Six years ago in these pages I defined jihadophilia as a mental disorder affecting members of the Western (including Anglo-Antipodean) elite class, which is characterized by a breakdown of the ability to name Muslims as perpetrators of the acts of Islamic terrorism, by the tendency to systematically ignore Islam as a factor in terrorist attacks or to deny its relevance in such attacks, and by an acute deficit of the capacity or will to provide appropriate institutional or legal responses to such attacks. This psychosis, hard to cure ab initio, will be let loose now like never before.

For starters, there will be no attempt to place today’s killings “in perspective,” as is invariably the case after Muslim terrorists strike Western targets—in Nice, Paris, Berlin etc.—killing hundreds of people. That “perspective” should include the fact that some 30 million Muslims reside in the Western world today (many more on their own reckoning), which makes the probability of any one of them falling victim to a deplorable attack in any given year roughly one in ten million.

These odds may be higher than being eaten by a great white shark, but they compare rather favorably with the probability of a Frenchman being killed by a Muslim fanatic. Be patient, dear reader; let us recoup with precision, lest we be accused of inflammatory rhetoric:

That makes 261 dead and many more injured, in attacks by Muslims on non-Muslims, in less than four years, in only one country, France (pop. 66 million). With 66 dead a year on average, Frenchmen are exactly ten times more likely to be murdered by a Muslim than a Muslim being killed by a non-Muslim terrorist anywhere in the Western world.

The score is incomparably worse if we look at the situation of Christians in the Muslim world. It is the most egregious example of human right violations in today’s world: according to “Open Doors,” at least 4,305 Christians known by name were murdered by Muslims because of their faith in 2018. Aid to the Church in Need, in its latest “Religious Freedom Report,” warned that 300 million Christians, overwhelmingly in the majority-Muslim countries, were subjected to violence, making it “the most persecuted religion in the world.”

These are some of the facts that need to be taken into account as we face today’s onslaught of massive Agitprop and self-hatred inducement from every screen and every printed page in every Western country. The victims and their families in New Zealand deserve sympathy. So do the victims of jihadism,which is the most murderous ideology in human history, incomparably more lethal than Bolshevism and National Socialism combined….

The article included above from Chronicles magazinehas been republished on LifeSite with the permission of Chronicles.

RELATED:
Christianity & Islam: Are We At War? By Father Mitch Pacwa, S.J.