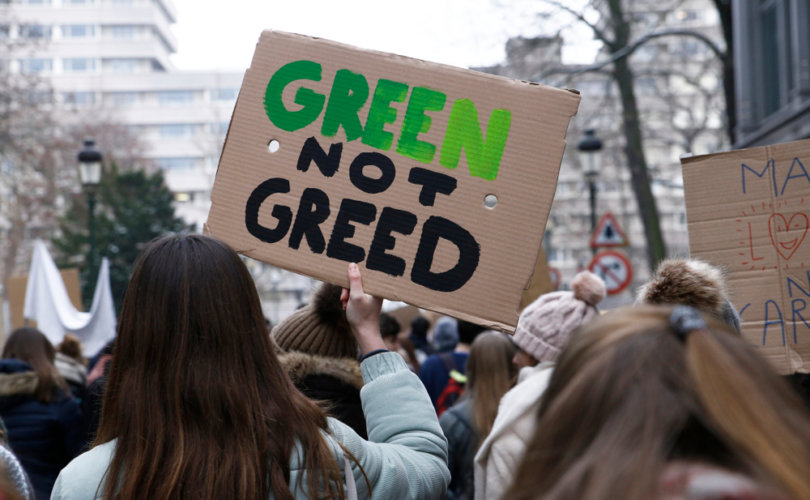 March 18, 2019 (LifeSiteNews) – When a terrorist shouts “Allahu akbar” while running over pedestrians with a truck, it is reasonable to assume that he is engaging in an act of Islamic terrorism.  And when Brenton Tarrant, the man who shot up two mosques in Christchurch, writes of his admiration for Communist China and calls himself an “eco-fascist,” one should take him at his word.

Most of the media isn’t, preferring to label him a “right-wing extremist” or “white nationalist.”

But this characterization bears almost no resemblance to Tarrant’s twisted thoughts, which we know in some detail from his 73-page “manifesto.”  In those pages, written only weeks before his deadly rampage, he summed up his political philosophy by saying:

Conservatism is corporatism in disguise.  I want no part of it. … The nation with the closest political and social values to my own is the People’s Republic of China.

Does that sound like something a “right-wing extremist” would say?

Most of Tarrant’s troubled screed is devoted to detailing the radical environmental views that led him to declare himself an “eco-fascist” and commit mass murder. To put it bluntly, he saw himself as attempting to save the planet by killing off some of the human beings who were despoiling it.

He chose his victims not primarily because of their religion, race, or culture, but because they were newcomers to New Zealand who were having lots of children, especially compared to the native-born.

But he had no particular attachment to New Zealand, or to any nation-state, so he can hardly be described as a “nationalist.”

He spoke of “invaders” coming into Europe, to be sure, but he was more worried about the growing host of human beings invading the earth as a whole. He had wildly inflated ideas about future population growth, thinking that our numbers would somehow grow to 50 billion, or even 100 billion. (They won’t.)  And he was obsessed with the idea of differential fertility—that other groups were having more babies than his own.

In other words, it’s all about the birth rates.

In obsessing over population growth, environmental collapse, and planetary apocalypse, he was following the ideological lead of people like Paul Ehrlich, Alexandra Ocasio-Cortez (AOC), and John Holdren, all of whom have publicly complained, in one way or another, that some people are having way too many children.

Ehrlich is famous for predicting—over and over again–that a “population bomb” will sooner or later devastate the planet. Newcomer AOC imagines that she knows the actual year—2023 AD–that the world will end.

Then there is John Holdren, who served in the White House as Obama’s science advisor. In his book, Ecoscience, Holdren endorses compulsory abortion, mass sterilization, and the sterilization and abortion of “undesirables.” He even proposed that a “Planetary Regime” be established, that would have the power to decide who would be allowed—and who would be forbidden—from having a baby.

China adopted every last one of Holdren’s radical suggestions, even down to the implementation of a quota system for births.

The one-child policy ended in 2016, but over its three-plus decades of existence was responsible for the forced abortion and sterilization of millions of women each year.  Chinese government officials like to brag that the policy “eliminated 400 million people from China’s population and contributed to the solution to Global Warming.”

Is it any wonder that our murderous Eco-Fascist loves the “political and social values” of Communist China?  Or that, in his own brutal way, he sought to emulate them?

The mainstream media, eager to blame Trump for everything from tornadoes to terror attacks, has seized upon a single reference to the President as a representative of “white identity” as evidence of the shooter’s motivation.

But as everyone except the Far Left now understands, Trump’s economic nationalism has nothing to do with race or creed, and everything to do with making life better for all Americans.

As for Tarrant, he makes it clear that he despises Trump’s policies on everything from economic growth and energy independence, to Second Amendment rights and trade.

Sounding like your typical Progressive, he complains that capitalism is destroying the planet, fossil fuel use is causing global warming, and all guns should be banned. He only used guns in the attack, he claims, in order to provoke politicians into banning them.

Tarrant calls for worker “ownership of the means of production” and the institution of a “Green Nationalism” to stop “the continued destruction of the natural environment itself through mass immigration and uncontrolled urbanization.”

Not a deep thinker, Tarrant did not come up with his radical anti-people, pro-green ideology entirely on his own. Similar ideas have been touted by leading political figures on the Left for years, decades even.  And ideas have consequences.

The myth of overpopulation has never been just a harmless fantasy.  It is a myth that has killed hundreds of millions.

Let me be clear: The attack in Christchurch was the product of a deranged mind, and only the attacker is responsible for his actions.

But clear as well is this: A self-declared Eco-Fascist killed 49 innocents in a misguided effort to save the planet from people.