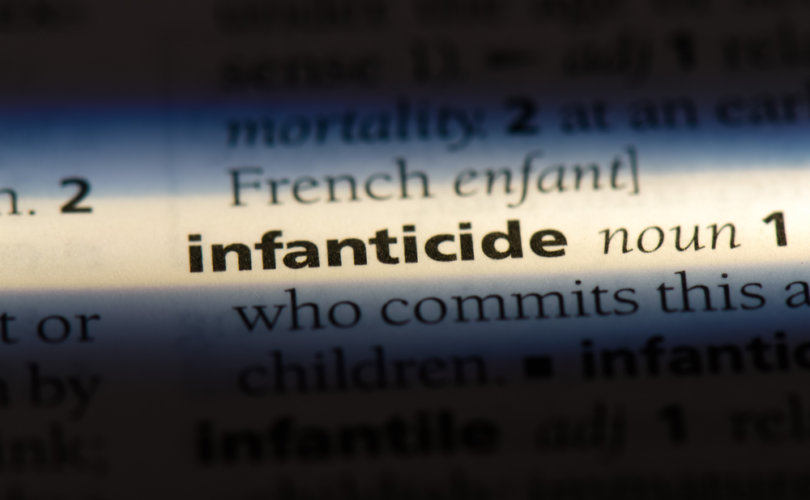 (LifeSiteNews) — For decades, pro-life activists have been warning that the introduction of abortion and euthanasia leads, inevitably, to post-utero infanticide. For decades, abortion activists decried pro-lifers as fearmongering extremists telling unconscionable lies. And then, when it happened, they defended it.

They defended it when abortionists were caught, time and again, killing babies after birth or leaving them to die without medical care after the little fighters survived the initial attempts on their lives. They defended it when organs were harvested from living babies. And they defended it, in the Netherlands, when the framework for infanticide was expanded last year from the 2004 Groningen Policy to other children, as well.

Of course, most will not defend these practices as “infanticide,” per se. These killings are defended as necessary sacrifices for sexual liberation, “choice,” “science,” or “compassion.” Infanticide is too inflammatory a term to use, which is why activists advocating for it are always careful to use different terms. And when researchers and journalists and activists shed light on the practice, it is ignored. How many, for example, heard of this recent report by the European Institute of Bioethics, published earlier this summer, revealing that a staggering 10% of newborn deaths in Belgium are euthanasia deaths?

According to the study, infants determined by medical professionals to have “no hope of a bearable future” are frequently killed by “deliberate euthanasia.” As the article states: “These practices concerned 10% of the neonates (0-1 year) who died in Flanders, between September 2016 and December 2017 (i.e., 24 babies).”

As is the case in the Netherlands, euthanizing those who cannot give consent is technically illegal, but authorities turn a blind eye to the practice. According to researcher Laure Dombrecht of the Vrije Universiteit Brussel, a comparison with a study in 1999/2000 indicates that this practice has increased by three points, from 7% to 10%. In the Netherlands, the practice is technically outside of the law, but a legal framework exists in which medical professionals can carry out infanticide without fear of prosecution. The authors of the recent study are advocating something similar for Belgium.

According to the article: “Doctors who euthanized newborns with lethal injection indicated in 91% of the cases that the main reason for their action was that there was no hope of a ‘bearable future’ for the child. In other words, these children had a real chance of survival, but the medical team — no doubt in agreement with their parents — considered that their lives were not worth living to the end.”

We know that our society’s standards for what constitutes a “bearable life” is horribly twisted as a eugenics mindset increasingly takes hold of our medical community. In the United Kingdom, for example, abortion is banned at 24 weeks gestation — but if the mother discovers that she is carrying a child with Down syndrome, she is permitted to have an abortion up until birth. Nearly 100% of people with Down syndrome report being happy with their lives — but the U.K. government wants to make sure that no parent is burdened with one of these special people, even if it means a grotesque murder in the womb at nine months.

There is one glimmer of hope in all of this. Heidi Crowter, a 26-year-old woman with Down syndrome, has sued the British government over this repulsive ableist policy. Two judges recently ruled against her, but she will appeal the ruling. Society’s view of people like her, as encapsulated by the Abortion Act, is “offensive” and disrespectful, she says. She is one of the survivors, and she is giving voice to other survivors. Her very existence is a rebuke to our society’s metastasizing views on infanticide, and we pray that she will succeed.