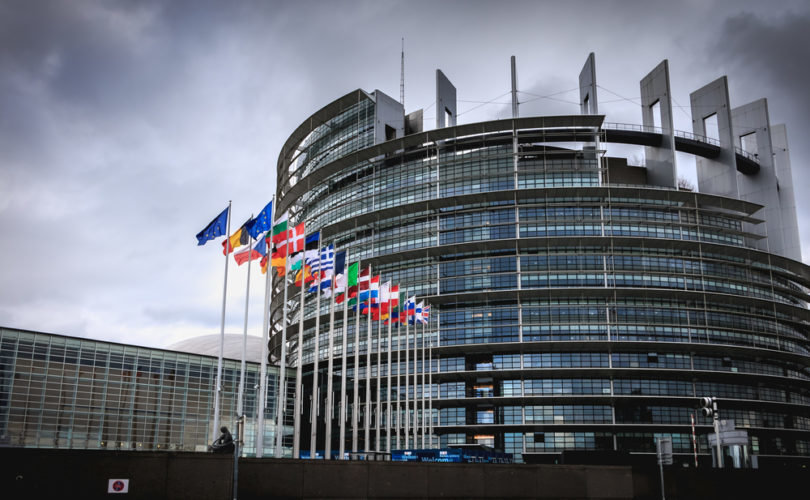 STRASBOURG, France (LifeSiteNews) — Roberta Metsola, a conservative, anti-abortion politician and Maltese MEP, was elected to the presidency of the European Parliament this Tuesday, obtaining the absolute majority during the very first round of voting. She will replace former president David Sassoli, who died earlier this month at age 65 of a “dysfunction of his immune system” following a respiratory infection.

Metsola’s Italian center-left predecessor was a staunch defender of COVID “vaccines” and had received at least one dose of the experimental COVID injection, according to the Italian press. According to official reports, his illness was due to bacterial pneumonia.

The COVID jab is set to become mandatory in EU member state Austria and has already been imposed on many health professionals throughout the European Union and all over-50’s in Italy.

Roberta Metsola’s personal stance on the inoculation is not clear at this point. On the other hand, she has affirmed her pro-life stance throughout her career. Until now.

It seems that Metsola’s personal convictions aren’t all that important: the mother of four declared prior to this Tuesday’s election –when she was already a favorite for the presidency of the Parliament of Strasbourg – that she would not push her views as president of the European assembly. Instead, she said she would respect the Parliament’s “unambiguous” pro-abortion position, and that its position would be her position, according to Euronews. One of her officials told another news source that Metsola “has made clear in all her campaign hearings that she would represent the majority” on women’s rights, setting aside her personal views.

“I can confirm and commit to all of you that this is the position I will push forward as I have done as vice-president,” she was quoted as saying by Euronews, highlighting that during the past year she spent as a vice-president, she presented resolutions from MEPs to the Polish Senate on Poland’s country’s near-total ban on adoption.

As a Member of European Parliament, Metsola has always personally voted against resolutions aiming to affirm abortion “rights” by the EU. Hailing from Malta, the last European country to penalize abortion – an exemption clause was negotiated in 2004 when the Mediterranean island joined the European Union – she is known to be a practicing Catholic. The liberal press is now even holding it against her that she abstained from a vote condemning “violence against women” in 2021.

“In Brussels, she opposed several reports and resolutions calling for women to have access to safe abortion services and condemning legislative moves to restrict such access. In 2015, she even issued a statement with other Maltese EPP MEPs saying they remained ‘categorically against abortion’,” recalled Politico, another European news site.

— Article continues below Petition —
PETITION: BOYCOTT IKEA for Discriminatory Policies Towards Unvaccinated Workers!
Show Petition Text
36198 have signed the petition.
Let's get to 40000!
Thank you for signing this petition!
Add your signature:
Show Petition Text

Strangely enough, she is also a defender of so-called “LGBT rights.”

Metsola will be the European Parliament’s third female president. The first was Simone Veil, French author of the infamous 1975 abortion law that has led to 200,000 legal and state-funded abortions every year in France since then. Veil was elected to the post 43 years ago, before Metsola was even born; the new president celebrated her 42nd birthday this Tuesday, the very day of her own election.

The deep contradiction between Metsola’s personal beliefs and the public stances she has committed to take as president of the European Parliament are disturbing, but they have not been sufficient to placate either the left wing of the assembly or official spokespeople of member-state governments.

Her anti-abortion convictions, however open to compromise, have been enough to trigger angry comments. Manon Aubry, a French MEP of the “Left Group,” stated: “We have regrets about her position in relation to abortion. This is a very difficult signal for hundreds of thousands of women, mainly in Poland, who are fighting to defend the right to have an abortion. I hope now that she will be able to represent the whole Parliament on this topic.”

Metsola’s election was the result of a common agreement negotiated on Monday by the three largest parliamentary groups, the “conservative” European People’s Party (EPP) to which she belongs, the Socialists and Democrats, and the liberal Renew group, who agreed that a conservative president would take over from the left-wing David Sassoli at mid-term.

The agreement stated that one of the first priorities the new president must serve should be “the upward alignment of women’s rights in Europe,” including those regarding “sexual and reproductive health.”

However, the Left and the Greens at the European Parliament are not happy with the deal. Interestingly, Sira Rego, a Spanish colleague of Manon Aubry and an unsuccessful candidate to the post Metsola has been elected to, said that she did not think the abortion issue would be problematic during her rival’s presidency, suggesting that, as a Maltese politician, Metsola could do nothing but follow her country’s lead on the subject.

If this is true, Metsola’s “elastic” morals can surely help her even further up the European political ladder, which she has been climbing ever since she started her professional life as a jurist under the Christian-Democrat banner as a member of the Maltese Nationalist party. At first, she worked at the Permanent Representation of Malta in Brussels and in the so-called “Foreign ministry” of the EU under Catherine Ashton, and then was finally elected to the European Parliament in 2013.

The French secretary of state for European affairs and personal adviser to president Emmanuel Macron, Clément Beaune, a self-affirmed homosexual, stated this Tuesday that he was “very sincerely disturbed by the symbol” of Metsola’s election.

“The personal position of Mrs. Metsola is to be against the right to abortion. It is indeed the position of all the Maltese political representatives. I deeply regret this,” said Beaune. As Macron’s representative, he is currently at the head of the EU Council, which is under France’s six-month term of presidency.

Beaune added: “This is an opportunity, since this message is not good, to go further, to say that we will fight even harder for the recognition of abortion rights everywhere in Europe, to say that we will support women’s rights, the rights of minorities everywhere in Europe, and that the French presidency will take additional initiatives to sanction violations of the rule of law.”

And this at a moment when Macron and his government are imposing a COVID vaccine passport on the entire French population that will bar those who are refusing to take the experimental jab from all leisure and sports venues, restaurants and cafés, long-distance public transport and from visiting the sick and the elderly in hospitals and care homes!