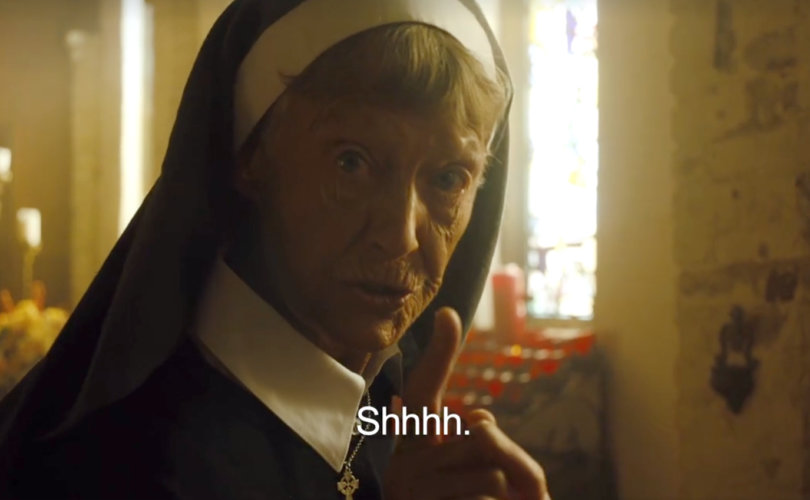 It’s an incredible story, and Nike has turned it into a brilliant viral ad.

Eighty-six year old nun, Sister Madonna Buder, pictured in the opening scene kneeling on a prie dieu in a darkened church in full religious habit, is running in Iron Man races. In fact, she’s already run 45 such races – consisting of a 2.4-mile swim, a 112-mile bicycle ride and a 26.22-mile run (a marathon).

The “Iron Nun” they call her.

I loved the video. And after watching it I immediately Googled the octogenarian athletic wonder.

In none of the dozens of photos that showed up could I find the traditional religious habit featured so prominently in the Nike ad. That's because she doesn't wear one. It was a prop.

In 1970, she left the congregation to which she had belonged to join 38 other Sisters from different and varying backgrounds to establish a new and non-traditional community of Sisters. As a member of the non-canonical Sisters for Christian Community, independent of the authority of the Roman Catholic Church, Buder has had the freedom to choose her own ministry and lifestyle.

In other words, it's debatable whether “Sister” Madonna Buder can rightly be called a “sister” or a Catholic nun at all. In fact, according to the Sisters for Christian Community (SFCC) website, their group was founded “originally to concern itself with the restructuring of a hierarchical institutional Church.”

Individually and as a full membership worldwide, SFCC earnestly believed that myopic opinions can be turned to mutual understanding. Division can be turned to unity. Oppressive structures can be reformatted. These are simple but weighty assumptions that point to the very essence of SFCC's “ministry of presence” through listening, loving and serving. By its very nature, then, SFCC's “ministry of presence” is a prophetic action that takes them wherever their charism is needed.

Clicking through the SFCC website, I came upon a set of four presentations given at their  Jubilee Anniversary. I clicked on one at random entiteld “SFCC, Justice, and the Future” by a certain Evelyn Mattern, in which she wrestles with the question of SFCC’s “charism.”

She encourages the “sisters” gathered to read more Noam Chomsky. She rails against economic injustice. And she lists the 3 “key elements” of the SFCC “ideological frame” which include, it turns out, “feminism.”

When I came into SFCC nearly twenty years ago I don’t remember our saying we were a feminist community the way we spoke frequently about being collegial and ecumenical, but Providence in the form of our experience of the sexist nature of the church seems to have remedied that.

You get the picture.

Christ and the Gospel do get an occasional mention. There seems to be an authentic concern with serving the poor and downtrodden. But the SFCC's “charism” (whatever, precisely, it is) is a far cry from the true model of religious life, which is the most visible expression in this world of the two greatest commandments: “Love the Lord thy God with all thy heart, mind, and soul,” and, “love thy neighbor as thy self” – in that order.

“Sister Madonna Buder” is a great athlete with a great story, and unquestionably in many ways a remarkable person.

Sadly, however, she is but one more victim of the catastrophic meteor (as a friend of mine calls it) that hit the Catholic religious orders in the 1960s and 70s. And now she, and her fellow “sisters,” are left wondering why their “order” is dying out, while convents modeled on the traditional model – including the wearing of the habit that Sister Madonna cast aside when she abandoned the convent in 1970s, and was sadly left donning as a mere prop in the Nike ad – are booming.

I suppose it's just one more case that highlights the need of being cautious with religious celebrities.

It's tempting to immediately celebrate every instance of a nun or a priest or a monk landing in the spotlight, giving rare, positive visibility to the religious life and our Catholic faith at a time when the Church is most often in the media for the worst possible reasons.

And yet, throughout history monks and nuns were rarely renowned for purely secular achievements, such as running Iron Man competitions, and this was for a reason: they were typically in their convents or monasteries, or local hospitals and schools, quietly praying and serving – unobtrusively running the most difficult Iron Man race there is: the race towards holiness.

There are exceptions of course (one thinks of the great scholars and scientists in the monastic tradition). But, as St. Paul once put it:

Do you not know that in a race all the runners compete, but only one receives the prize? So run that you may obtain it. Every athlete exercises self-control in all things. They do it to receive a perishable wreath, but we an imperishable. Well, I do not run aimlessly, I do not box as one beating the air; but I pommel my body and subdue it, lest after preaching to others I myself should be disqualified.