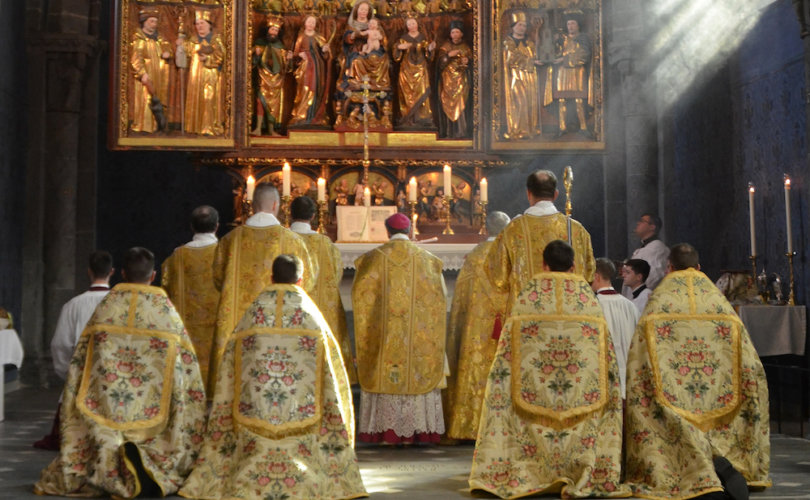 November 21, 2017 (LifeSiteNews) – The influential 20th century German theologian Romano Guardini, in his 1956 book The End of the Modern World, opined that “modern man” is so cut off from nature and culture that he will eventually reach an existential nakedness in which he will be compelled to stand empty-handed before God, with no supports any more in the world he inhabits — and in this moment he will be able to achieve a superior enlightenment, a purer faith, a deeper holiness. Learning, culture, signs and symbols fall away, yielding to a free and rational mysticism that goes past the trappings we used to rely upon.

There is something about this picture of isolated man in the midst of a barren modernity that should strike us as inherently non-Catholic, even anti-Catholic. It also happens to be anti-Guardinian, in the sense that Guardini himself argued for a different view in other books. Take, for example, his classic The Spirit of the Liturgy (1935), which was so influential on the thought of Joseph Ratzinger that the latter gave the same title to a book of his own. Guardini observes:

Individuals, or short waves of enthusiasm, can to a wide degree dispense with learning and culture. This is proved by the beginnings of the desert Orders in Egypt, and of the mendicant friars, and by holy people in all ages. But, generally speaking, a fairly high degree of genuine learning and culture is necessary in the long run, in order to keep spiritual life healthy. By means of these two things spiritual life retains its energy, clearness, and catholicity. Culture preserves spiritual life from the unhealthy, eccentric, and one-sided elements with which it tends to get involved only too easily. Culture enables religion to express itself, and helps it to distinguish what is essential from what is non-essential, the means from the end, and the path from the goal. The Church has always condemned every attempt at attacking science, art, property, and so on. The same Church which so resolutely stresses the “one thing necessary,” and which upholds with the greatest impressiveness the teaching of the Evangelical Counsels — that we must be ready to sacrifice everything for the sake of eternal salvation — nevertheless desires, as a rule, that spiritual life should be impregnated with the wholesome salt of genuine and lofty culture.

To reinforce the point, Guardini responds to an objection that as long as God is at work in the soul, we do not need anything else:

Certainly the grace of God is self-sufficient; neither nature nor the work of man is necessary in order that a soul may be sanctified. God “can awaken of these stones children to Abraham.” But as a rule He wishes that everything which belongs to man in the way of good, lofty, natural and cultural possessions shall be placed at the disposal of religion and so serve the Kingdom of God. He has interconnected the natural and the supernatural order, and has given natural things a place in the scheme of His supernatural designs.

One of the most important of the “natural things” Our Lord wishes to make use of is what we call culture, which may be defined as the shared set of ways in which a society or people is accustomed to expressing, celebrating, and inculcating its vision of God, man, and the world. On this definition, a Catholic culture is just what a society inspired by the Faith will produce and cherish: an environment that turns the mind to God gently, frequently, effectively, making full use of the high beauties of fine art and the rugged genius of folk art, the impressive pageantry of ceremonial and the stabilizing force of rituals.

Such a culture shapes the space and structures the time in which we live, work, rest, play, fast, and feast. It points us to common goals and ultimate goals, to personal aims and collective aims. Indeed, it is no exaggeration to say that one receives one’s identity from a certain “collective memory,” the continually renewed remembrance of who and what we are, and all the cultural forms that embody this remembrance. This identity is not primarily conceptual or intellectual but dwells in concrete, visible, audible, tangible expressions that serve as prompts for self-knowledge, confident action, and fruitful suffering. None of this can occur in a cultural vacuum.

Each man is a rational, linguistic, artistic being; each man is born into a family and a people, with a history of which he is a part. For these reasons, man is necessarily a cultural animal. To the extent that he is deprived of a rich cultural inheritance or inherits it only piecemeal, he suffers a certain dehumanization, a denaturing that leaves him feeling incomplete, fragmented, disoriented, unmoored. To a greater or lesser extent depending on his sensitivity and awareness, he cannot help seeing as a lack, a wound, a handicap the inability to draw freely upon a heritage wider and deeper than himself.

In like manner and for much the same reasons, man is a liturgical animal; hence not to receive a rich inheritance of the sacred liturgy from one’s forefathers is equally contrary to man’s social nature and supernatural dignity. Surely, a Catholic who does not have this double inheritance of culture and liturgy is living a sub-optimal life, suffering from spiritual orphanhood, amnesia, myopia.

To go further: without external identifiable signs in which its allegiance to truth is unambiguously manifested, a minority cannot long survive in a hostile environment; it will simply be assimilated to the enemy’s signs. All people have ‘sacraments’ or signs of what is sacred to them, venerated as guarantors of righteousness. The difference is between those who have true sacraments and those who have false ones.

So, talking about a Benedict Option is far too weak. We should speak rather of a Benedict Imperative. The Christian Faith, when believed and lived, will necessarily create a Christian culture and a Christian society; it demands them as its native environment and fairest flowering. As Pope John Paul II said: “The synthesis between culture and faith is not just a demand of culture, but also of faith. … A faith which does not become culture is a faith which has not been fully received, not thoroughly thought through, not faithfully lived out” (Letter Establishing the Pontifical Council of Culture, 20 May 1982). John Paul II instances St. Benedict:

Faith in Christ who became incarnate in history not only transforms individuals inwardly, but also regenerates peoples and their cultures. … Only a faith that is the source of radical spiritual decisions can have an effect on an era’s culture. Thus the attitude of St. Benedict, the Roman patrician who left an ageing society and withdrew in solitude, asceticism, and prayer, was decisive for the growth of Christian civilization. For the Gospel brings culture to its perfection, and authentic culture is open to the Gospel. (Address to the Plenary Assembly of the Pontifical Council of Culture, 14 March 1997)

Thus, one might say that the ancient Church was bound to produce a St. Benedict of Nursia. Alisdair MacIntyre was by no means incorrect, then, to say that we, too, are waiting for our Benedict — but I am not so sure he was right that he had to be “doubtless very different.” It is our modern pride that makes us think the modern Benedict must not look and think and act like the Patriarch of Western monasticism and the Co-Patron of Europe. Perhaps the greatest surprise coming to the post-post-modern world will be a reestablishment of Christendom along classical lines, with kings seated on their thrones and monks chanting the Divine Office across the land, scholastics debating finer points of the divine law and guilds churning out noble artifacts of every kind. Stranger things have happened in human history.