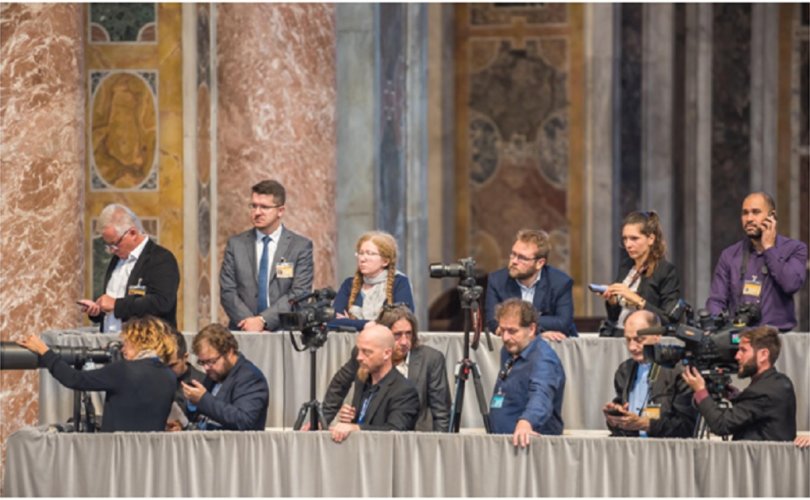 Editor’s note: Our Scotland-based reporter, Dorothy Cummings McLean, has been sent to Italy to join our Rome correspondent, Diane Montagna, in covering the Synod for the Bishops of the Pan-Amazon Region. A lifelong diarist, Dorothy has volunteered to give readers a glimpse into life off-camera as she carries out what she calls “a dream assignment.” Read all of her Amazon Synod diary posts HERE.

In Father Robert E. Benson’s Lord of the World, a novel Pope Francis recommended at the beginning of his reign, a pagan statue representing “Maternity” is erected in St. Paul’s Cathedral in London. Unveiled by the Anti-Christ/president of Europe after pogroms on English Catholics and the firebombing of Rome, the statue is a naked woman and child.

I was, therefore, not exactly thrilled to be hurrying to St. Peter’s Basilica to see if the red-bellied Pachamama had been set up before the altar for the closing Mass of the Amazon Synod. Normally, I would not be going to St. Peter’s at all for Sunday Mass, but to the much humbler church where I have been going almost every morning of my Rome sojourn. However, I knew that my job was to see if Pachamama had turned up for the final Mass, even if the dome of St. Peter’s subsequently fell in.

That’s how you feel when you stay up late reading tweets about the Abomination of Desolation and asteroids hitting Rome.

I wasn’t sure I would get in, for I hadn’t received an email saying my presence had been approved. However, my press badge was enough for the Swiss Guards, who saluted me through to Vatican City and then into a side door of St. Peter’s. When I spotted a photographer’s platform, I climbed up its rickety ladder and found myself beside Krystian Kratiuk of Polonia Christiana. Across from me was another platform, and on that one was my LifeSiteNews colleague Jim Hale, already shooting “B-roll” ― background footage for yet another story.

Kratiuk told me that Pachamama was as yet nowhere to be seen. Below us in the sparsely populated VIP section, fourteen or so of the Amazonian missionary team sat behind some purple-clad bishops. They looked solemn and dignified despite their casual clothing, although the most dignified was an indigenous man who wore a headdress of feathers cascading down his very straight back. At least two of the other indigenous people had stripes painted on their faces, but these too added a formal note. I should add that the vast majority of the faithful in the nave were also wearing casual, though modest, clothing. I cannot imagine what all of our great-grandparents would have thought of that.

Someone delivered a pile of papers to the media section, and we passed them out among ourselves. They were copies of Pope Francis’s homily with translations, and Kratiuk snorted,   presumably because the Sala Stampa had finally provided him something in Polish. He tore off the English translation for me, and I read it swiftly. It was about the differing prayers of the tax-collector and the Pharisee. Understandably, the homilist came down hard on the Pharisee, but I noted also that in this homily the Pharisee, with his “rites and ‘prayers,’” could be interpreted to mean “loveless” old traditionalists horrified by what we had seen so far of the Amazonian rite. The political is always personal for our sovereign pontiff.

As before the consistory service, an unseen announcer began to lead an Italian rosary, in which few in the congregation seemed to join. The prayers ended with the choir singing the Salve Regina in Latin. The congregation, possibly thinking this was the entrance hymn, stood and turned to face the doors. And, indeed, it was not very long before the synodal procession began; comprising priests; laypeople; green-clad bishops; and Pope Francis himself, distinguished in dress from the bishops only by his white pallium and papal ferula, a staff with a crucifix on top.

The Liturgy of the Word was swift but respectful, even subdued. The readings were in Spanish and Portuguese, I believe, and the Gospel in Italian. The pontiff added a few rhetorical flourishes to his homily, but otherwise he remained true to his text, which was good, actually. I’m certainly still thinking about it. Of course, I’m also thinking about the Amazonian missionary team and how sad it would be if they think the Pachamamas were thrown in the Tiber not because Pachamama is a pagan goddess, but because traditionalists don’t like them.

My own Mass began at 11, and I had calculated how long it would take me to get there from St. Peter’s: fifteen minutes. I’m not proud of this, and I’m not sure I did the right thing, but my plan was to wait until the Offertory to see if Pachamama made her appearance then, and then to quietly slip away.

Pachamama was not paraded to the altar. I realize that some believe that the dish of potted plants placed on the altar was Pachamama in disguise, but I think this is finding evil where there is none, as the prefect for the Dicastery for Communications might say. Although potted plants don’t belong on the altar itself, I can’t really see the liturgical difference between a dish of greenery representing the planet and a harvest festival basket of squash. And thus I shook hands with Krystian Kratiuk and carefully descended the scary ladder.

Unfortunately, I was not allowed to slip out discreetly. Instead, I had to walk along the entire length of the Basilica under the eyes of the entire non-VIP congregation to the liturgical right. I hoped very fervently that as a middle-aged woman in a navy maxi-dress, I was the next best thing to invisible. Walking out on Peter is not a good look, and I had no way of explaining that I was on my way to another Mass.

As it was, I was late, but I did get there before the Gospel. The church was packed to the walls, and I atoned for my sins by kneeling through most of what was an unusually long liturgy, even for the TLM, thanks for an extensive French homily.

I spent the rest of the day having lunch with Rome friends in darkest Trastevere, staring at my computer, and cleaning my AirBnB apartment. I also had a final ice cream with my German friend. He was excited to hear about the married priests and the continued encouragement for a diaconate for women. Naturally, he thinks this is progress. Munich: 2; Rome: 0 ― but at least the dome of St. Peter’s still stands.