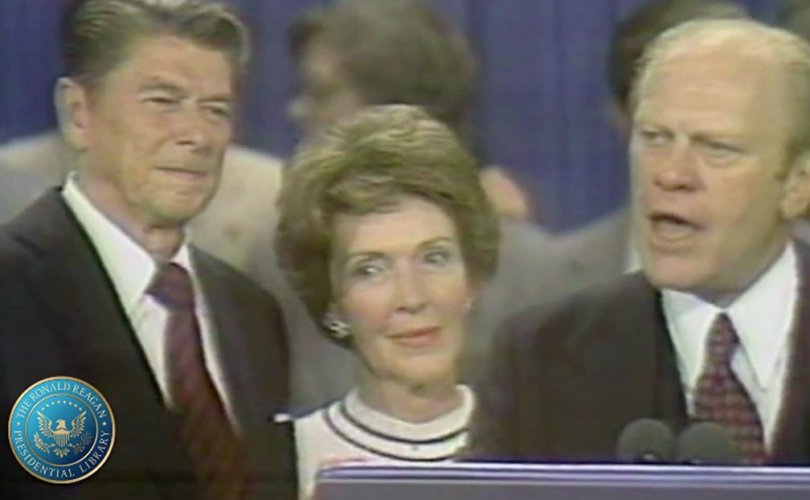 August, 1, 2016 (LifeSiteNews) – My July 22 article about the extreme negative reaction to Ted Cruz’s powerful speech emphasizing conservative principles, but which did not include an explicit endorsement of Trump, provoked a lot of reaction. A common criticism was that it was wrong for Cruz to accept Trump’s invitation to speak on the last day of the convention and not endorse Trump. That was said to violate Republican protocol. It was claimed that even Ronald Reagan endorsed Gerald Ford after losing a vicious nomination fight to Ford and that Reagan afterwards still extensively campaigned for Ford. It turns out that those claims attempting to paint Cruz as some kind of traitor to the party are just not true.

In his article No, Reagan did NOT endorse Ford. Here’s why, Craig Shirley, a leading biographer of President Reagan, emphasizes that not only did Reagan not explicitly endorse Ford when Ford asked him to speak at the close of the nomination convention; he also refused to campaign for Ford. What campaigning Reagan did do was to promote “the conservative movement” and on only one of those occasions did he mention Ford’s name.

There were in fact notable similarities between Reagan’s and Cruz’s responses to their victorious opponents.

“Reagan never, ever uttered such a phrase (endorsement) when it came to Gerald Ford in 1976. Not by a long shot. Not at the Kansas City convention and not afterwards in the fall. Nor did he ever campaign for Ford. These are matters of undeniable fact, despite the attempt of some Trump boosters to rewrite history by suggesting that Reagan really did support Ford, and Sen. Ted Cruz, R-Texas (A, 97%) was alone in not endorsing Donald Trump this time around. History is too precious and important to be rewritten by a few uninformed Trump revisionists at CNN, just to satisfy a new story line.”

Reagan, like Cruz, also felt that he was abused and deprived of a fair chance at the nomination. Shirley writes that, Reagan, “who is seldom bitter,” “was bitter. Bitter and angry” and “convinced that Ford has stolen the nomination from him.” There were indications that Reagan’s political career was over, the same as was said about Ted Cruz after his speech.

Reagan did not want to speak at the closing of the 1976 convention in response to Ford’s repeated invitations and other strong pressures for him to do so, but he eventually succumbed, and Shirley writes,

“the livid and defeated Reagan took the stage and changed the nation forever. The speech he gave has been documented time and time again as one of his greatest and certainly his greatest extemporaneous speech. In it he celebrated a bold vision of America, without ever mentioning Ford.”

Whether Ted Cruz’s speech will be seen as one of his greatest remains to be seen, but just like Ronald Reagan, when he too was bitter about the way he had been treated, he boldly and inspiringly promoted the importance of the Republican Party’s conservative principles in a speech which received strong, repeated applause from the convention delegates, as did Reagan’s similar remarks. Like Reagan, there was nothing negative in Cruz’s speech about his opponent.

Cruz’s speech was not as skillfully diplomatic as was Reagans’, but it must be taken into account that, as bad as were the tactics used against Reagan, what Ted Cruz was subjected to what even worse and more personal. So, some extra understanding should have been given to him.

Whether one was for or against Cruz is beside the point. Anyone who might have given that speech did not deserve the vicious mob reaction that suddenly exploded, especially from the New York delegation, near the end of the speech. This was likely a pre-planned reaction to boo and catcall Cruz as soon as the line “vote your conscience” was stated.

It is reasonable to suspect that a large group of Trump delegates were told about the line in advance. Cruz had given the text of his speech to the Trump campaign. They knew exactly what he was going to say and it appears they planned a “spontaneous” attempt to destroy Cruz’s political future should he go ahead and speak the line written near the end of his speech.

Ted Cruz is not a Ronald Reagan great communicator, former star actor and governor of the large state of California. Cruz, like Reagan, is no saint. Especially unfortunate for Cruz, is that, unlike Reagan, many intensely dislike him simply because they don’t like the way he talks and looks.

We are in a very shallow age now where image has become the deciding factor for most voters. There have always been great dangers for cultures that gave so little importance to substance and overriding importance to easily contrived image. Many such cultures quickly devolved into dictatorships and eventual collapse.

However, Cruz is a highly accomplished lawyer and junior Senator with a consistent, long track record of praiseworthy accomplishments and proven fidelity to the Constitution and conservative principles. He has been 100% on both life and family.

The way Ted Cruz was treated from near the end of his speech and since then has been a discredit to all who participated in it. It follows the old adage of cutting off one’s nose to spite their face. To condemn such a man because he did not do exactly what was demanded of him says a lot more about those who did the condemning than it says about Ted Cruz.

Writing this article is not a way to gain popularity as I have learned, but I never write anything for such a reason. I am not a Ted Cruz supporter and in fact we have a LifeSite policy that journalists must not be seen to use their LifeSite articles to campaign for or against any candidate for office. For us, the facts that relate to our issues are all that matter. In the case of this Ted Cruz debacle, there is also the matter of simple justice.

Hopefully, as happened with Ronald Reagan, Republicans can get back to focusing on what matters the most and leave behind all the personal animosities. As we have seen from the Democratic convention, what Americans face from a possible Hillary Clinton win is likely even worse than the massive damage that the US has endured under Barack Obama. And that is truly frightening.

It should also be constantly kept in mind that the upcoming election concerns a lot more than just Clinton versus Trump. There are a large number of crucial races for public offices at local and state levels.

Every effort must be made to elect strong, genuinely conservative candidates who could provide the only check against dangerous proposals (include bad Supreme Court nominations) by either a Clinton or Trump presidency. In the end, those races might be a more deciding factor for the future of the United States than whether Clinton or Trump becomes the next president.

See also When Voting Your Conscience Became a Political Liability

Ted Cruz’s refusal to endorse Trump: a betrayal or a courageous act?