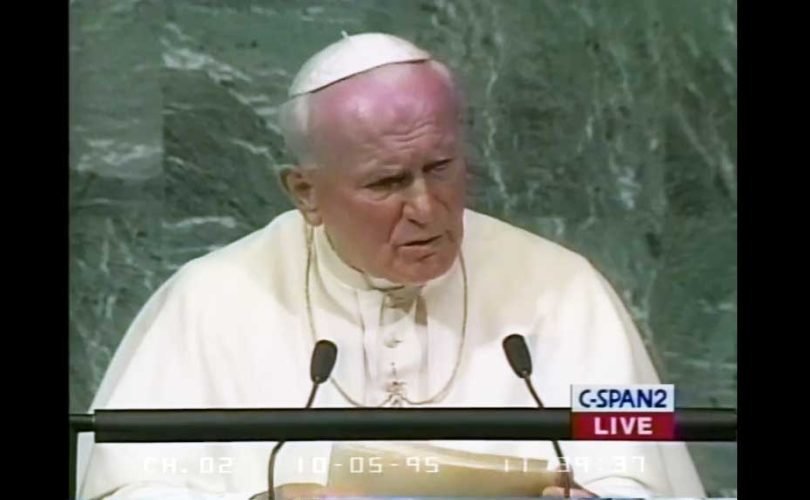 September 24, 2015 (LifeSiteNews) – Phil Lawler of Catholicculture.org beat me to an item I was also preparing. Over the weekend, I was comparing the speeches of St. Pope John Paul II and Francis to the United Nations and was struck by a crucial difference in the speeches while also noting many similarities.

There has been much commentary about the fact that Francis avoided mentioning or notably minimized Jesus Christ, faith, trust in God and the most current and critical issues of Christian morality in his talks to the Joint Congress and the United Nations. Growing numbers are writing that these were sadly missed opportunities at a time when more explicit evangelization is badly needed, even more than during the times of John Paul II and Benedict XVI.

It is very important to realize that the situation now, compared to when the other popes addressed the United Nations, is that a U.S. president is now in power who is a vicious enemy of the faith and morality of authentic Christianity and of the founding principles of the United States. There has never been a U.S. president like this.

Barack Obama and all those who are supporting and working with him in Congress and at the UN are engaged in international efforts to dramatically transform the United States (and succeeding) into a godless, socialist and militarily crippled nation, to destroy the influence of Christianity in government and society and to implement a new international, governance that will attempt to supersede the national sovereignty of every nation.

We are in historically unprecedented times. The United States has never been so endangered by chaos, internal corruption and incomprehensible debt, the movement towards some form of despotic world governance has never been so possible, the violent persecution of Christians by Islamists has not been so foreboding in centuries and there have never been anything like the plans and actions now in place and so massively funded to de-populate the earth of billions.

The main emphasis of the speeches by Pope Francis was on poverty, climate change, immigration, capital punishment and so forth. These issues could be seen to be purely secular and therefore not controversial or offensive to those who oppose the Church’s overwhelmingly spiritual mission and duty to proclaim the Gospel. Also, it is hard to imagine that John Paul II would have given any approval to the propagandist, totalitarian leaning Climate Change movement given his years of personal experiences and sorrows with Nazism and Communism.

In contrast to Francis, during his October 5, 1995 speech to the United Nations, St. Pope John Paul II stated the following:

As a Christian, my hope and trust are centered on Jesus Christ, the two thousandth anniversary of whose birth will be celebrated at the coming of the new millennium. We Christians believe that in his Death and Resurrection were fully revealed God's love and his care for all creation. Jesus Christ is for us God made man, and made a part of the history of humanity. Precisely for this reason, Christian hope for the world and its future extends to every human person. Because of the radiant humanity of Christ, nothing genuinely human fails to touch the hearts of Christians. Faith in Christ does not impel us to intolerance. On the contrary, it obliges us to engage others in a respectful dialogue. Love of Christ does not distract us from interest in others, but rather invites us to responsibility for them, to the exclusion of no one and indeed, if anything, with a special concern for the weakest and the suffering. Thus, as we approach the two thousandth anniversary of the birth of Christ, the Church asks only to be able to propose respectfully this message of salvation, and to be able to promote, in charity and service, the solidarity of the entire human family.

If anyone was surprised—let alone offended—by the Pope's references to Jesus Christ, I can't find their complaints in the historical record. He's the Pope, for Peter's sake. What did you expect him to talk about? Climate change?