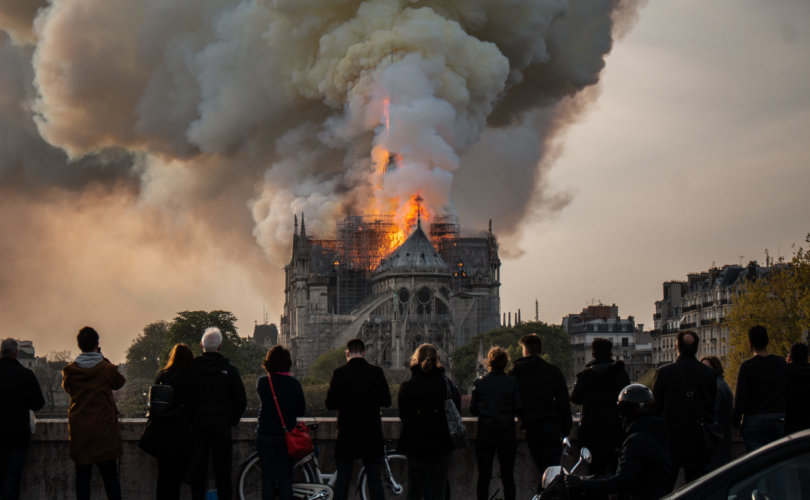 July 13, 2020 (LifeSiteNews) – Notre Dame cathedral will not be defaced by a contemporary spire after all. The cabinet of the French President Emmanuel Macron announced that the spire, which collapsed during the fire that destroyed the roof of the beloved landmark in Paris and its framework at the beginning of Holy Week in April 2019, will be reconstructed in its original form.

Macron is now “convinced” that an identical spire must be constructed, according to a statement by the presidential palace, the Elysée, on Thursday evening. During the day, the chief architect of Notre Dame, Philippe Villeneuve, had presented his 3,000-page report in favor of respecting the traditional building work to the National Heritage and Architecture Commission (CNPA) that includes elected political representatives as well as experts and architects working on the site of Notre Dame.

His recommendations regarding the use of traditional materials were also approved by the CNPA.

A spokesman of the Elysée stated last week that President Macron had decided to rely on the totality of the experts’ advice.

However, according to the Elysée, Macron is in favor of working together with the (socialist) municipality of Paris in order to redevelop the vicinity of the cathedral and in particular its large esplanade. Fears still exist that commercial interests could lead to creating an underground luxury shopping mall. Also, the cathedral’s forecourt might be chosen as the place to add a “contemporary gesture,” according to the statement.

The news that Notre Dame itself will be preserved from such attempts is a relief for the majority of French citizens, who repeatedly made clear their attachment to a restoration that would be faithful to the historic image of Notre Dame, both in petitions and opinion polls. Catholics all over the world will also be grateful to see the medieval cathedral preserved from questionable projects that had already started to flourish in the days after the fire.

The reason for their fears was anything but unfounded. Less than 48 hours after the stunned people of France had watched the roof of Notre Dame go up in flames with spectacular speed and had seen the spire topple over as a mere plaything, Macron publicly declared the building would be restored and rebuilt within five years, adding that he would like the works to include a “contemporary gesture.”

This was before he had even spoken with experts, and his words sparked a series of propositions. They went from transforming the roof of the cathedral into a flat terrace with gardens to adding a roof entirely made of stained glass (which would have been invisible from below because of the masonry underneath the framework), or adding a contemporary metal or glass spire with multiple pointed triangles.

The fact that Macron was in a position to choose made his reckless proposition particularly worrisome. One year later, it was he who had the last word in deciding to follow the recommendations of various commissions and other groups who consistently pleaded for the “identical” reconstruction of the damaged roof and spire. Whatever his personal feelings, Macron appeared not to have wanted to take the risk of tackling the sentiment of the majority, in a context of social unrest and the tragic downturn of the economy because of the COVID-19 lockdown, whose effects are expected to become quite visible in September after the summer vacation.

While last year the mainstream press downplayed the anger of many ordinary citizens who complained about Macron’s intention to add a contemporary spire to Notre Dame, France’s main news sources are now saluting his “consensual” decision not to touch the traditional skyline of the Cathedral, and explaining how strange it would have looked to add a glass or vegetal highlight to its roof.

In fact, beyond the popular sentiment that Notre Dame should remain as it was, there are many other factors in favor of the most traditional solution.

The first one is that the idea of adding contemporary “art” to the cathedral’s roof had practically no support in France, not even from contemporary artists and architects themselves. Popular resentment was so great that Macron knew he would face lawsuits and organized opposition both in France and abroad.

On the legal front, these would have been well-founded. France is bound by UNESCO international agreements it helped to develop: since 1963, parties to those agreements have committed to restore damaged classified buildings to their state at the time of their classification. The spire of Notre Dame was classified in the second half of the 19th century.

The Catholic Church, in its capacity as official and sole user of the cathedral – the building itself belongs to the French state since the laws of separation between Church and State in 1905 – was also heavily opposed to any change.

But so were the majority of “culture” officials as well as Paris Mayor Anne Hidalgo, who for once did not favor the most progressive option.

Practical reasons also abound. Reconstructing the cathedral in its former state is actually the cheapest and quickest response, especially because the building plans for the damaged spire are already perfectly established. Adding a new, contemporary structure would have required lengthy procedures and administrative processes to validate the innovations. For once, red tape will have contributed to saving the day.

The cheapest solution of all – leaving the cathedral in its damaged state, with repairs limited to the consolidation of the existent structure – was on the table, but mercifully set aside.

As Macron is holding on to his promise of reopening Notre Dame to the public by 2024, experts have pushed for the reconstruction of a wooden framework to support the roof instead of a cement or steel — as was used for Reims cathedral — alternative. Wood is both strong and light compared with other materials, and incredibly resistant; the existing framework of Notre Dame was 800 years old and could have remained in place for a thousand years more if it had not been for the fire.

Besides, wood is safer even in fires: old beams take longer to ignite and even longer to collapse and it is this factor that allowed firefighters to save many treasures from the cathedral before the structure went up in flames. If the framework had been made of cement or steel, the risk of sudden breakage would have been great.

The difficulty of finding sufficiently tall and slender oaks – about one thousand– as were used in the Middle Ages, is not all that great: there are 6 million hectares of oak groves in France. Moreover, recent research by Frédéric Epaud, a specialist of medieval frameworks at the French national scientific research council, CNRS, has shown that at the time of the construction of the great cathedrals, wood was used in frameworks green, shortly after being felled, and not dried for years beforehand as was previously thought.

It will be necessary, though, not to use modern saws to give the wood its form: instead of sawing the trunks nice and straight, the safest plan is to return to the medieval technique using a small chip-ax that allows for following the wood’s grain, making the resulting beam more unique, and also saving wood as bent wood can be used. A handful of French companies still have this know-how and will be able to transmit it to a sufficient number of carpenters to work on the project.

In the 13th century, it took a team of 15 to 20 carpenters only 19 months to make the wooden framework of the massive cathedral of Bourges, from the squaring of the wood to its lifting and reassembling at the top of the building.

There is still a lively network of traditional craftsmen who are familiar with old building techniques and France is well equipped to step up to the challenge of consolidating and rebuilding Notre Dame. The reconstruction of the spire will be the easiest part, as the one that collapsed last year was not particularly old and its building plans are available in detail.

The original spire, which had included seven bells since the 17th century, showed signs of weakness at the end of the 18th century and it was feared that it would come down. It was dismantled between 1786 and 1792. At the time, Notre Dame was in a sad state and it was only the 19th century revival of interest in medieval architecture, which had been scorned by the Renaissance as “gothic,” that allowed the cathedral to be carefully restored and saved.

Architect Eugène Viollet-le-Duc took charge of Notre Dame as he did of many other gothic buildings. He decided to replace the missing spire by one of his own design, developed out of a profound knowledge of the techniques and artistic canons of the Middle Ages. It turned out to be in such harmony with the cathedral that it looked as if it had always adorned it.

Viollet-le-Duc’s know-how will be used to reconstruct the spire that was in fact under restoration before the fire broke out, with a wooden framework protected with lead. The bronze statues of the Apostles that Viollet-le-Duc had imagined to lead up to the spire will simply be returned to Notre Dame after having been deposed in view of the restoration before the fire.

As to the metal Gallic rooster that served as a wind-vane at the top of the spire, it was miraculously recovered after the fire, with minimal damage. The rooster, which includes relics of the patrons of Paris, St. Denis and St. Genevieve, and a fragment from the crown of thorns of Our Lord, is expected to be replaced by a copy, and the original lead bird complete with relics will be exposed to the public as a witness to the terrible fire of April 15, 2019.