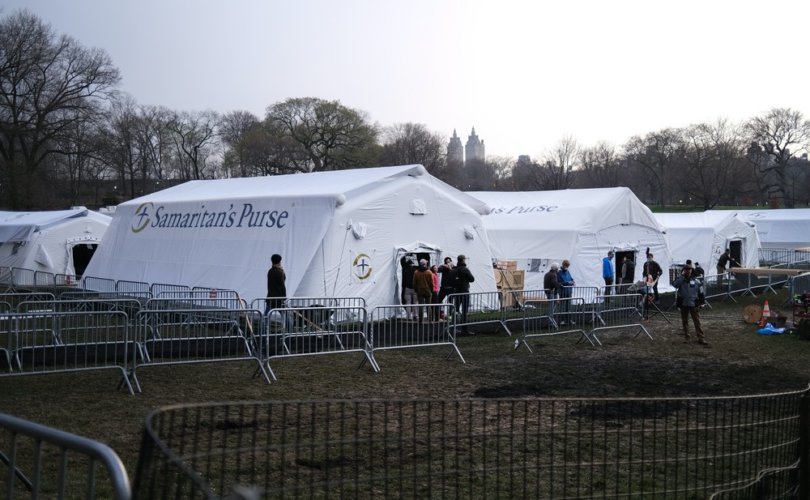 May 4, 2020 (LifeSiteNews) – Over the weekend, former president George W. Bush released a call for unity, reminding his fellow Americans of the days following 9/11, when the entire nation seemed to speak with one voice. For a brief moment, political divides vanished in the face of a common enemy and a shared tragedy, and in the face of the coronavirus pandemic, Bush stated, it is time for Americans to come together.

But it has been a very long 19 years since 2001, and 2020 is a much different year. Americans are not the same people they were two decades ago, and I don’t need to rehash the details of the ongoing political polarization here. One particular example of America’s inability to bridge divides comes immediately to mind: The attacks by LGBT activists on the Christian charity Samaritan’s Purse, which set up a field hospital in Central Park to assist Mt. Sinai Hospital in treating victims of the pandemic.

My cousin was one of the nurses working at the field hospital, and she told me that police were posted to ensure that LGBT protestors (yes, there were people protesting a field hospital during a pandemic because the organization funding the field hospital has a different view of sexual ethics) didn’t get rowdy. At one point, she said, an LGBT activist jumped the fence to plant a flag. The activists, working with a group called the Reclaim Pride Coalition, unironically waved signs that read “help not hate.”

“How was this group ever considered to bring their hatred and their vitriol into our city at a time of crisis when our people are fighting a pandemic?” demanded Jay. W. Walker of Reclaim Pride. He did not explain how a medical organization quite literally saving lives as hospitals were packed to the overflowing was “bringing hate and vitriol,” or how the medical professionals risking their lives to save strangers were “hateful” while he, in protesting the help being given to the sick and dying, is somehow “loving.” This is a person so blinded by hate he cannot even understand how ludicrous he sounds.

And now that the curve has been flattened and the pandemic appears (at least for the moment) to be under control, progressives are immediately going on the attack again. The volunteers with Samaritan’s Purse risked their own lives to save the lives of strangers, but now that the immediate danger seems to have passed, LGBT activists are again demanding that they get evicted. Corey Johnson, the speaker of the New York City Council, released a statement to Twitter on May 1:

My statement on Samaritan's Purse:

It is time for Samaritan's Purse to leave NYC. This group, led by the notoriously bigoted, hate-spewing Franklin Graham, came at a time when our city couldn't in good conscience turn away any offer of help. That time has passed.

I pause here to note Johnson’s unironic use of the phrase “in good conscience.”

Their continued presence here is an affront to our values of inclusion, and is painful for all New Yorkers who care deeply about the LGBTQ community.

Imagine how schizophrenic you have to be to make the case that the presence of people who do not agree with you on sexual ethics is “an affront to our values of inclusion” and that these undesirables must therefore be excluded. More:

I'm aware that our battle against COVID-19 is still ongoing, and that our health care system—and the amazing workers who have been the heroes of this unprecedented time in our history—still needs support. The @NYCCouncil is committed to supporting those workers and protecting our city's public health. But as a city that values diversity and compassion for all, we can't continue allowing a group with their track record to remain here when we're past the point they're needed.

Mount Sinai must sever its relationship with Samaritan’s Purse. Its leader calls the LGBTQ community “detestable” and “immoral.” He says being gay is “an affront to God,” and refers to gay Christians as “the enemy.” Samaritan's Purse requires its volunteers to agree to a written affirmation “that marriage is exclusively the union of one genetic male and one genetic female.” Hate has no place in our beautiful city.

Got that? Now that the Christian volunteers have risked their lives to successfully save others, they can be thrown out as hateful trash. Thanks for nothing, bigots.

It is the attitude of men like Corey Johnson and his fellow activists that are a cancer on the American Republic. There can be no unity as long as they seethe with hatred for all those who disagree with them or hold a different moral worldview. There can be no unity when Christians doing what Christians have always done for the past 2,000 years—nursed the sick and the dying when few others would—are seen as a threat because they believe, as most humans for all of history have, that marriage is between a man and a woman. And there can be no unity as long as even the willingness of young Christian women and men to sacrifice for others is rejected.

Corey Johnson and Jay Walker and their ilk can spout off about love and inclusiveness, but it is a joke. They do not want to share the city, the state, and the country with anyone who disagrees with them—and they will break the country to make sure they don't have to.

In this week’s episode of The Van Maren Show, Anne Schlafly Cori, daughter of legendary conservative activist Phyllis Schlafly, joins Jonathon to set the record straight in the wake of a new Hulu TV show spitting on her mother’s memory. Anne shares the wonderful, selfless things Phyllis accomplished in her life, including helping to elect Ronald Reagan.