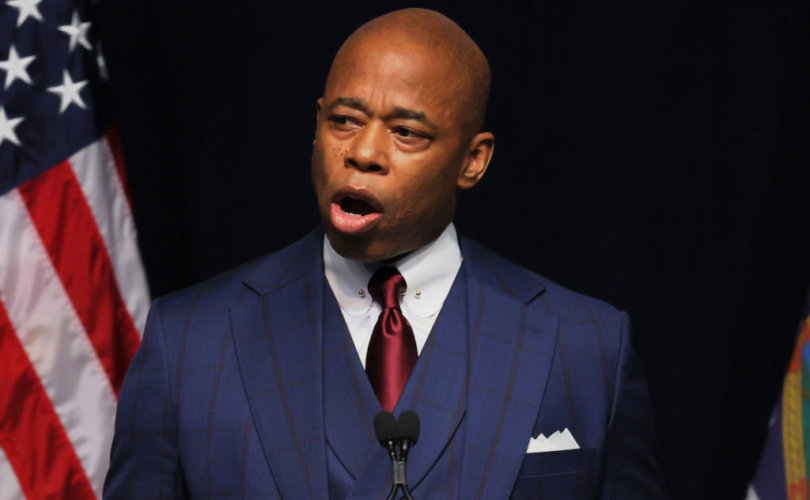 (LifeSiteNews) — Reports emerged Wednesday that New York City was going to make a slight but significant change to its COVID vaccine mandate for employers. Sure enough, Mayor Eric Adams announced Thursday a special exemption for the city’s unvaccinated “athletes and performers.”

That means Brooklyn Nets star Kyrie Irving can actually play in home games — just in time for the NBA playoffs — and New York Yankees star Aaron Judge (as well as some of his teammates and Mets counterparts) will be spared a forced absence from the playing field as well.

But this concession, while a welcome sight for them and their fans, is a spectacular slap in the face for the city’s unvaccinated that only increases the absurdity of the mandate to a new degree.

There’s hardly a doubt that thousands of unvaccinated New Yorkers lost their jobs earlier this year because of the employer mandate, which applies to both the public and private sectors. The Big Apple fired over 1,400 city employees in February alone, with the jobs of nearly 10,000 more without an approved religious or medical exemption also hanging in the balance at that time.

Given the estimated 4.7 million people employed within New York’s city limits — 325,000 of whom are city employees — and a citywide vaccination rate of 87% among adults, it’s not unreasonable to suggest that hundreds of thousands of New Yorkers have been affected by the employer mandate.

Although many of them reluctantly bit the bullet, still many others quit their jobs, began looking for employment outside the city, or took a principled stand and paid the price. Now they get to watch their mayor make an exception for certain people because they’re rich and famous.

Of course, the employer mandate was ludicrous when it was implemented, and we’re not surprised to witness the very public exposure of its contradictions. Although Mayor Adams inherited the mandate from his predecessor Bill de Blasio, he decided to pick a losing battle with the unvaccinated Kyrie Irving while relaxing COVID restrictions elsewhere.

Not only could Irving watch his team’s games as a “fan” while being barred from playing or entering the locker room. The repeal of the city’s vaccine passport meant that unvaccinated cooks and servers could now dine at New York City restaurants but couldn’t work for them. Makes total sense.

Mayor Adams could’ve plausibly held out on Irving. After all, Irving is just one basketball player (albeit a superstar), and the Australian government infamously held out on No. 1 men’s tennis player Novak Djokovic ahead of the Australian Open in January. But with the return of Major League Baseball around the corner, Yankees manager Aaron Boone openly admitted that “a few” of his players weren’t vaccinated, one of whom was alleged to be Aaron Judge after he coyly sidestepped a reporter’s question about his vaccination status.

If you thought Irving’s situation was preposterous, consider the optics of barring a man who plays an outdoor sport and stands all by his lonesome out in right field half the time anyway. There was no chance the employer mandate would’ve fully withstood such absurdities much longer, but Mayor Adams must’ve thought it better to give a pass to wealthy entertainers than to repeal the mandate altogether.

New York City leaders really knotted themselves into a pretzel by implementing the mandate in the first place. Recognizing and dealing with its farcicality is a step in the right direction, but I sure would be upset if I were an unvaccinated New Yorker who lost his job or had to relocate, only for some of the “haves” with far greater lobbying power to secure an exemption for themselves and themselves alone.

Evan Stambaugh is a LifeSite journalist. He has a BA in Theology and an MA in Philosophy. He previously served as a volunteer, intern, and field assistant for Donald Trump’s successful presidential campaign in 2016.