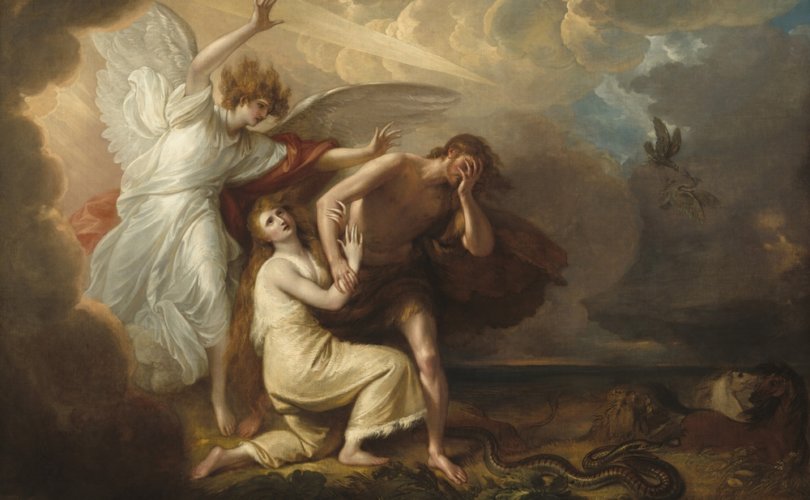 The Expulsion of Adam and Eve from Paradise, 1791, by Benjamin West.Shutterstock.com

October 18, 2018 (LifeSiteNews) – A friend once told me the story of how, when he was a graduate student at Harvard Divinity School, he went before the faculty to present his idea for a doctoral thesis: the obedience of Jesus in the Gospel of John. There was a moment’s pause, and one of the senior professors, a famous liberal, leaned forward and said: “This is an unacceptable topic. Obedience is the root of all evils.”

Such an attitude was understandable in a German scholar who had lived through National Socialism, when thousands of citizens suppressed the voice of their consciences and followed a crazed dictator into horrific disaster, in the name of obedience to leader, people, and nation.

Such an attitude is also understandable today in the Catholic Church, when the unveiling of the corruption of prelates at all levels prompts the faithful to withhold not only funding but also moral cooperation and intellectual assent. “Obedience—to them? Are you kidding?” might become a common refrain. And bishops had better be aware of the long process of purification, internal discipline, and extensive rebuilding that will be necessary before they can reasonably expect a better response. Put differently, bishops will have to work their cassocks off to win and retain the respect of their flocks, now that they have squandered it utterly.

The modern crisis of obedience is a crisis of authority abused and trust misplaced. In the political sphere, authority has too often not been directed to the common good of the people but to the private good of the ruler or special interest groups, a phenomenon that has become rampant in American federal politics. Something similar can be seen in the manner in which some prelates, religious superiors, or husbands and fathers have ruled more for their own comfort and convenience than for the genuine good of their subjects. The rise of liberalism (including feminism) is, at least in part, a reaction against real abuses, even as Protestantism, grandfather of modern liberalism, justified its dissent in the face of a late medieval Christendom of moral laxity and religious abuses. Taking all this together with twentieth-century fascism and communism, we are perhaps not surprised by the Harvard professor’s generalization, for blind obedience to those who claim power over souls can be a terrible thing.

But there is a deeper problem lurking here as well.

The statement that “obedience is the root of all evils” perfectly expresses the attitude of modernity. The so-called Enlightenment was born out of a desire to be free from authority, to “think for oneself” and stand in no relation of dependency on anyone else—to be, in short, the god of one’s own world. We find Immanuel Kant saying in his short essay “What is Enlightenment?” that man can be free only if he is free from everyone and dares to think by himself, for himself (aude sapere); as long as he is dependent on another, he is a slave.

Such thoughts flow from the same destructive delusion that fallen man has always entertained, after the fatal disobedience of Adam and Eve. Though dressed in the elegant garb of Königsberg, Kant’s position differs in no way from that of the serpent in the garden of Eden.

In truth, as St. Thomas Aquinas says in On the Perfection of the Spiritual Life, obedience is the proper response of the creature, of the servant; it is the path of one who knows where he comes from and where he is going, who understands the primacy of his Maker and Lord, and trusts in his Providence. By humbly obeying God and His representatives on earth, man negates the illusion of autonomy and enters into the liberty of the children of God who are led by His Spirit of love, not by their own easily mistaken desires. In fact, Aquinas says that man makes a perfect offering of himself not by giving up external goods, not even by giving up family ties and marriage, but only by giving up his own will as distinct from God’s—and therefore the one who longs for divine life can obtain it only by relinquishing his claims on any other life that he can call “his own.”

How, then, do we avoid the many evils of “blind” obedience to which we earlier referred?

In an absolute sense, it is not obedience that comes first, but truth and love; and this is why obedience rightly understood is not blind. In the order of being, there is first the truth, and the love of this truth; and then, obedience is the only appropriate response to truth, the only appropriate response of the will to truth that is to be loved for its own sake. Take away truth, and you take away love; take away love, and you take away the root of obedience. By the same token, take away obedience, and you will obscure the permanence and objectivity of the good loved, and undermine commitment to it; take away obedience, and you deny the sovereign rights of truth over your mind.

Within this Christian life, God places certain obligations on us, according to definite vocations. When a man and woman get married, they accept the duties of their state in life; they need to do whatever God asks them to do as spouses and parents. This is by no means easy, but it is a clear, concrete instance of obedience in action, and the experience of the saints has been that this obedience to one’s calling is liberating. It requires a death to self, to false autonomy—yet the end is not death, but resurrection, and the freedom of divine friendship.

Beyond the duty of our state in life, we are called to give obedience to all legitimate authority derived from God and exercised, at least obliquely, in His name. This would include our responsibilities as members of associations, employees in a business, citizens of a nation, and so forth. Surely there are dangers and complications involved in any of these areas. It is enough to say that the nearer one is to Jesus himself and His immaculate Bride, the Catholic Church, the more absolute is the obedience owed; the further away, the more qualified and in need of prudential judgment.

Jesus Christ gave us a single, visible Church that teaches with His own authority on all matters necessary for salvation and even for the modicum of human happiness that can be had in this life. The purpose of every gift He gives us is to lead us to union with Him, the Truth incarnate, the love of God made visible. So, whatever obedience we rightly offer is given, either directly or indirectly, to Christ the King and to His Church. It is our association with the King and our citizenship in His kingdom that dignifies our obedience to His vicegerents on earth. This is why Christian obedience is not only not the root of all evils, but is, instead, the protector and promoter of our happiness.