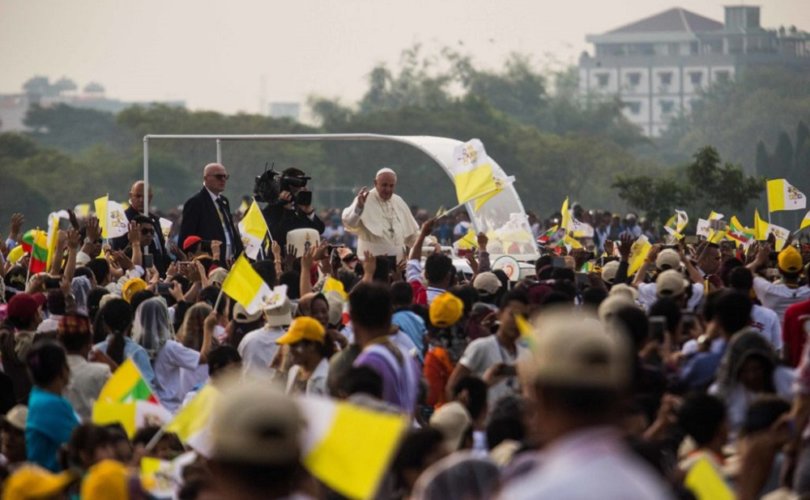 January 7, 2020 (LifeSiteNews) — Since Vatican I defines the pope to have “that infallibility which the divine Redeemer willed his Church to enjoy in defining doctrine concerning faith or morals,” it follows that the authority of popes and ecumenical councils — or of bishops taken all together as witnesses to the Faith and teachers of their flocks — is essentially identical.

Note that infallibility is a negative guarantee: it means freedom from error when defining matters of faith and morals. Therefore, a pope who teaches ex cathedra and a council that makes de fide declarations and anathematizes their contrary errors are alike teaching infallibly — that is, without possibility of error, although neither is guaranteed to have given the best or most complete formulation that could admit of no possible improvement or augmentation. It follows, moreover, that a pope or a council that teaches without signifying such an intention to declare and bind all Christians is teaching with magisterial authority, but without such a guarantee of infallibility. In other words, a pope or council may be in error when not teaching infallibly (this is almost a tautological statement).

Beyond this negative guarantee for the papacy, the worldwide episcopacy enjoys a positive guarantee that the deposit of faith will never perish within it. The Oath against Modernism expresses it thus: “the charism of truth, which certainly is, was, and always will be in the succession of the episcopacy from the apostles.” In that way, the body of bishops enjoys a positive privilege that the pope, taken in isolation, lacks.

As two scholars explained it to me (from a forthcoming book of theirs):

This union of the positive and negative guarantees, absent in merely papal teaching, is why Bishop Vincent Gasser said in his Relatio at Vatican I that “the most solemn judgment of the Church in matters of faith and morals is and always will be the judgment of an ecumenical council, in which the Pope passes judgment together with the bishops of the Catholic world who meet and judge together with him.” Conversely, this is why the Council of Florence felt the need to justify the Holy See’s unilateral adoption of the Filioque as arising “from imminent need.” The implication is that the Holy See should not define unilaterally except from imminent need.

To repeat: both papal and conciliar teaching can be in error (that is, are fallible) precisely when they do not officially and expressly engage the highest level of authority that pertains to them, viz., establishing doctrine in a definitive manner, which will be signified by language indicating that it is being taught as pertaining to the Catholic faith and must be held by all under pain of exclusion from the body of Christ.

The papal encyclical as a genre was invented by Benedict XIV in the eighteenth century; no pope addressed the universal church without defining until Gregory XVI in 1832. If this is correct, it could be argued that the routine direction of fallible teaching to the universal Church is an inappropriate use of the papal office, which eclipses the functions of the diocesan bishop.

The hypertrophism of papal authority in the past 150 years has had the unintended side-effect of greatly diminishing the stature of bishops, to the point where they seem incapable of proclaiming the orthodox faith or taking on heretics without the pope leading the way or even providing the script. The ultimate reductio ad absurdum is the striking spectacle of today: some 5,100 Catholic bishops, the vast majority of whom appear to be incapable of breathing a word against a notorious manufacturer of scandals and a multipronged heretic.

Let’s contrast the situation with the ringing statements of the Lateran Synod of A.D. 649, still in the heroic age of the Church Fathers:

If anyone … does not reject and anathematize in his soul and with his lips all those whom the holy, catholic and apostolic Church of God … rejects and anathematizes as most abominable heretics, together with all their impious writings down to the last detail — that is, Sabellius, Arius … and in brief, all the remaining heretics … [i]f anyone therefore … does not does not reject and anathematize all those most impious doctrines of their heresy, and those matters that have been impiously written by anyone in their favor or in explanation of them … let such a person be condemned. (Canon 18; Denzinger-Hünermann 518–522)

Could this passage be written off, Protestant-style, as one more example of how uppity and intolerant the Catholic Church had become after several centuries of public prominence and pastoral pretensions? No, that trick won’t work. It was St. Paul and St. John, whose apostolic credentials no sane Christian calls into question, who first gave us the model of condemning heretics by name and in no uncertain terms. In 2 Timothy and 3 John, we find the following seven names spelled out: Phygelus, Hermogenes, Hymenaeus, Philetus, Demas, Alexander, and Diotrophes. Their names stand in Scripture for no other reason than to provide a model of how such people should be dealt with.

According to the entire history and practice of the Faith, one must confront the man who is a heretic and condemn that man’s doctrines and the man alike. It is not enough to condemn errors without singling out those who originate or promote or defend them. That is the great weakness of all those who will not name Pope Francis as a source of evils, but are content to gesture toward “problems,” “errors,” “confusions,” and “mistakes.” It is not only not uncharitable to name names; it is uncharitable not to name names.

Instead, the Church in our times fosters a culture in which each individual may assert whatever doctrine he supposes sounds good to him, trading his idea with that of someone with whom he disagrees, in an everlasting dialectic until kingdom come. Such a culture is reminiscent of the position of Protestants, who, having only the private authority of their personal interpretations of Scripture, lack a body of teaching based on the Deposit of Faith and an ecclesial hierarchy to which appeal can be made and from which answers can be handed down. Trading doctrines like this, in a great give-and-take of chummy tolerance, is not and never has been Catholic. It might best be termed “Anglican.”

The Catholic way — authoritative proclamation and clear condemnation — is the way of Christ, the apostles, and the Fathers. It was the way of the Church until Vatican II, when John XXIII signified a rupture with past practice in Gaudet Mater Ecclesia: now the medicine of an optimistic mercy would be delivered to men of Pelagian good will. This new method, heavy on sentiment and light on truth, combined with unchecked hyperpapalism and episcopal diminution, results in a dysfunctional ecclesiastical body.