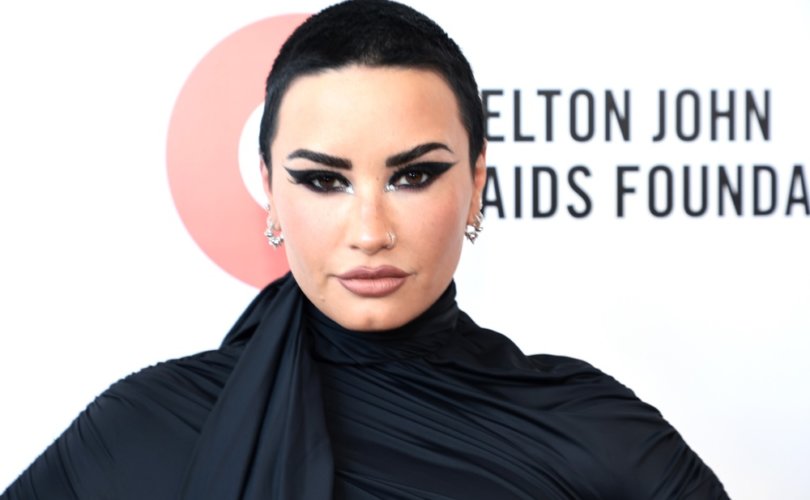 (LifeSiteNews) – Last year, I wrote in this space about pop star Demi Lovato’s decision to announce that she was “gender-fluid” and adopt “they/them” pronouns. I noted that it is tempting to write off these stupid little culture stories as mildly pathetic attempts by celebrities to break through the noise and tap into the current cultural capital of the LGBT movement. Why should we care? The answer, of course, is that these stories serve to normalize an increasingly compulsory regime in which we will all be made to care – even those of us who intentionally live our lives oblivious to the soap opera of the celebrity reality show.

The response to Lovato’s latest announcement – that after a fluid year or so, she will be retiring the gimmick and returning to her she/her pronouns – has been predictable. Conservative commentators at The Daily Wire and elsewhere have responded with great guffaws, and this reaction is appropriate. The entire thing is obviously ridiculous. But the media reaction is indicative, and we should take note of it. Outlet after outlet warned people that this is not ridiculous; that we should take it very seriously; and even that Lovato wasn’t actually abandoning the they/them pronouns – she was simply adding the she/her pronouns. Some journalists made an ostentatious show of using they/them in their articles.

It is good to note what the elites take seriously, because it is the sort of thing they will be attempting to force us all to take seriously very shortly. Lovato told one commentator that: “I’m such a fluid person. Recently, I’ve been feeling more feminine, and so I’ve adopted she/her again.” The natural headline for this would be “bored celebrity gets over her flirtation with non-binary pronouns, which aren’t a thing.” But here’s what the Washington Post wants us to take away from this. The article is titled “Demi Lovato’s she/they pronouns can help normalize gender fluidity, advocates say”:

While some outlets’ language suggested Lovato had “gone back” to she/her pronouns, experts say it’s common for trans and nonbinary people to use multiple pronouns, and to interchange pronouns throughout their gender journey.

“Oftentimes, people might cycle through different gender identities, or different language they’re using or different pronouns, and it doesn’t necessarily mean that they’re not their true selves,” said Sabra Katz-Wise, an assistant professor in adolescent/young adult medicine at Boston Children’s Hospital. “It’s just sort of part of this larger gender journey that people are on.”

Indeed, many on social media reinforced that idea and expressed hope that Lovato’s story would help normalize this experience: “This is a reminder that gender and sexuality can be totally fluid and that’s okay!” one user wrote on Twitter. And many criticized the media’s portrayal of the news. “The media’s reaction to Demi Lovato using she/they pronouns is why I wish I’d stuck with they/them,” another user wrote. “The second I switched to he/they everyone stopped using they.”

The Post goes on to quote a number of other young people on how they, too, are following journeys that mimic Lovato’s. Gender is “a social construct” and they “don’t relate to gender binary norms,” which means that switching pronouns on the reg isn’t a mockable attention grab as far as they are concerned, but an important milestone in Lovato’s “journey,” which will presumably continue on the current roller coaster route while the media informs us all to take every new step with the utmost seriousness. In fact, Lovato herself has told the media that she’s on a “forever journey” and that she also identifies as queer and pansexual, because why not?

As far as the Post is concerned, Lovato’s story is all about normalization and mainstreaming gender ideology:

In recent years, other celebrities have come out as nonbinary or transgender. In 2019, singer Sam Smith changed their pronouns to they/them. In 2020, actor Elliot Page came out as transgender and nonbinary. And this year, singer Janelle Monae confirmed she is nonbinary, telling the Los Angeles Times she’ll use both they/them and she/her pronouns.

White is grateful for their stories: “It means a lot for me personally as a transgender and nonbinary person because it helps to normalize conversations about gender and fluidity.”

Williams agrees. “It’s so important for our communities not to just have allies but to see representation,” they said. “If it wasn’t for social media and the change in conversation in popular culture, I may not know these labels existed.”