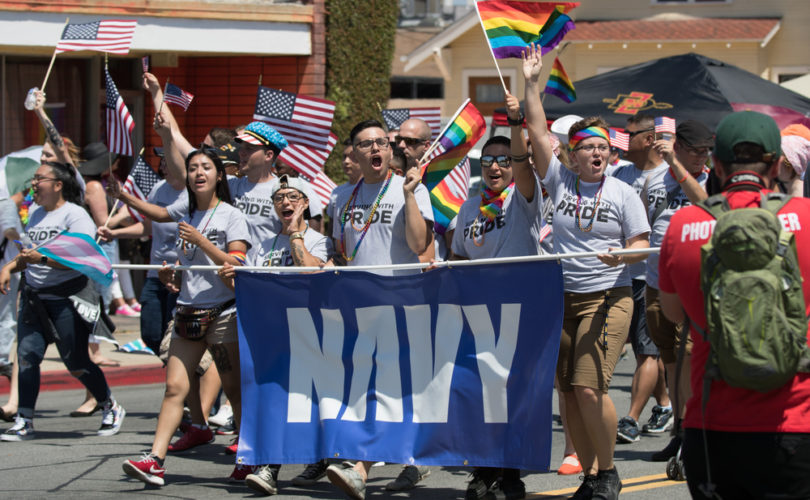 July 15, 2021 (LifeSiteNews) – Some years ago, I interviewed Stephen Mansfield on his book The Faith of the American Soldier. Embedding with soldiers on the ground in Iraq to research the beliefs of military service members as well as the role of chaplains in serving the troops, he produced a fascinating (and near-unique) account of faith under fire. But one developing aspect of the role of faith in the military, he told me, was the extent to which progressive activists were pushing a new agenda that many chaplains found incompatible with their beliefs. In a war for the hearts and minds of America’s fighting men and women, woke activists were winning — at least, in terms of institutional infiltration.

A recent report indicates that these trends are rapidly accelerating. According to the Daily Mail, an official report says, “the U.S. Navy is too woke for war because of risk averse, politically correct, control-freak top brass.” The report, which was prepared by Rear Admiral Mark Montgomery and Marine Lt. General Robert Schmidle and commissioned by members of Congress in response to two collisions involving Navy ships and the surrender of two seacraft to Iran, “claimed that the Navy’s surface warfare forces have systemic training and leadership issues, including a focus on diversity that overshadows basic readiness skills.”

After anonymously interviewing nearly eighty Naval officers, Montgomery and Schmidle found that 94% of those interviewed believed that recent failures — including the two collisions in the Pacific — were “part of a broader problem in Navy culture or leadership.”

As one retied officer scathingly put it: “I guarantee you every unit in the Navy is up to speed on their diversity training. I’m sorry that I can’t say the same of their ship-handling training.” According to a black lieutenant: “Sometimes I think we care more about whether we have enough diversity officers than if we’ll survive a fight with the Chinese Navy. It’s criminal. They think my only value is as a black woman.”

From across the U.S. Navy, officers — including captains — complained that the top brass appears to value appearances over the ability to fight wars. The report concluded that the excessive focus on social engineering was hurting the Navy’s readiness for combat: “The non-combat curricula consume Navy resources, clog inboxes, create administrative quagmires, and monopolize precious training time. By weighing down sailors with non-combat related training and administrative burdens, both Congress and Navy leaders risk sending them into battle less prepared and less focused than their opponents.”

The final conclusion was a jarring one: “A major peer-level conflict in the 21st Century will likely play out largely in the naval theaters of operations; unlike the surface Navy’s last major war, which concluded 76 years ago, such a conflict will likely proceed swiftly and not permit significant time for organizational learning once it is underway. Unless changes are made, the Navy risks losing the next major conflict.”

Over at The American Conservative, retired U.S. Army colonel Douglas Macgregor, a former senior advisor to the Secretary of Defense, noted that increasingly, military officials are simply following the dictates of civilian overseers — and thus “ready to adopt whatever politically mandated social policy their civilian superiors demand, provided they are left to run the service bureaucracies, control promotions, and structure the forces as they like. Thus, punishing midshipmen who criticize Black Lives Matter and compelling soldiers to march in high heels or to embrace identity politics even in the face of evidence that such policies might weaken, if not subvert, American fighting power is carried out with surprisingly little fanfare.”

For progressives, everything takes a back seat to the imperatives of the revolution — and that includes the fighting readiness of the armed forces.