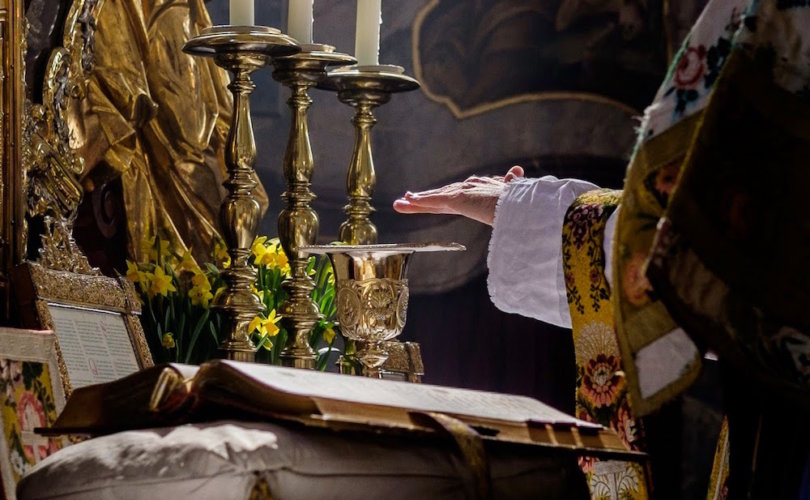 October 17, 2017 (LifeSiteNews) — Nowadays, when traditional beliefs and practices are making an unexpected comeback in Catholicism, one sees skeptics shaking their heads and talking about how the tradition of the past is dead and buried, or beautiful but inaccessible, or how one risks weirdness in attempting to “reconnect” with something that is no longer spontaneously seen and felt as “ours.” To me, however, such skepticism makes no sense, because my experience in life has been that tradition is alive and well. But one has to give oneself to it; it is alive and well in those in whom it lives and flourishes. Let me explain.

I am a singer and composer of sacred music. Sacred music has always been a realm of great conservatism, in which each generation, while adding to the common store, continues to preserve and sing the inherited music. For example, when Renaissance polyphony was born, Gregorian chant did not vanish; it continued to be used alongside the new style. When the Baroque supplanted the Renaissance, secular music changed considerably, but in the liturgy of the Church one could still frequently hear the strains of Palestrina, Lassus, or Victoria. When Mozart and Haydn were writing their orchestral Masses, the Propers were still being chanted in the same age-old plainsong. To this very day, wherever the liturgy is being celebrated as it ought, we will still hear those ancient chants, perhaps complemented by motets or Masses drawn from any of the creative periods through which the Faith has passed. To be a performer and composer of sacred music is to experience the perennial freshness and presentness of this entire heritage. It does not come across as stiffly old-fashioned, as if one were trying to revive an earlier style of clothing; it comes across as ancient, sacred, appropriate, custom-made for its purpose.

When I write my own music, I follow my predecessors, whether I consciously will to do so or just follow my fancy: my homophony and polyphony will have chant-like melodies and established cadences. But it never sounds like an attempt at an historically authentic reconstruction of a past composer, as if I’m pretending to be Palestrina. Quite apart from the fact that I do not have the talent to pull off a perfectly convincing imitation of Palestrina, it is experientially evident that music by modern composers, however “conservative” they may be, still sounds like new music by moderns, yet rooted in the tradition to which they are happy to belong, harmonious with all that has come before.

In other words, I have an experience of “being myself,” of producing my own work, while at the same time being in continuity with the Catholic tradition. There is no antagonism in this relationship. The past is not “merely” the past, since it lives on in my mind and heart as a present reality that I bring into the future. Palestrina is dead, but Palestrina’s music, whenever it is performed, is as alive as it was when it first sounded in the churches of Rome. Committed to paper, the music acquires an ideal existence, and when performed it achieves real existence again — and comes into the ears of people today as beautifully ordered sound. I have had a similar experience watching my children plunge themselves in the repertoires of their respective instruments (harp, lute, piano, organ). No matter what period of time the piece of music is from, they go at it as if it were hot off the press, and they make it come alive again, giving pleasure to the listeners.

For me, the most fundamental and life-changing experience in this regard has been discovering and apprenticing myself to the traditional liturgy of the Roman Catholic Church — becoming a pupil to its rich prayers and beautiful chants, its pregnant gestures and magnificent symbols. It has taken me decades to reach a point where I am completely “at one” with this liturgy, where it speaks to me intimately, past all need for analysis; and so far from having lost its fascination through familiarity, it strikes me now as something I could not live without, I could not be without. This tradition, which for some outsiders is a cobweb-covered museum piece, is vibrantly alive in my soul and in the souls of many people I know, such as my wife and children. It has become for us not an object we gaze upon but a medium through which we live and look and love.

The crucial factor in all that I have recounted is this: one has to immerse oneself in the tradition. It cannot be the dipping of a toe in the stream. It cannot be a cool academic consideration from afar, peering through multiple veils of commentary and apparatus. It has to be a “full immersion experience”: one has to let go of oneself, forget oneself, abandon oneself to the reality at hand, and let it shape one’s seeing and hearing, even one’s expectations of what there is to be seen and to be heard.

It is precisely at this point that modern self-consciousness — which is another way of saying the temptation of autonomy — objects: “You’d better be careful about letting yourself go. You might end up a different person. You might get swallowed up and become a fanatic. It is better to keep control of yourself and keep a distance, to maintain the objectivity of a neutral observer.” In other words, it is the Serpent whispering: “Don’t be a holy fool. Those who immerse themselves in the river may drown.” This objection, which all of us have faced in one form or another, shows that there is a certain choice involved in the failure to connect with Catholic Tradition, at least for those who are fortunate enough to brush up against it: one is afraid to open oneself to the transcendent mystery it symbolizes and communicates.

In his inaugural homily on April 24, 2005, Pope Benedict XVI forcefully portrayed this dramatic alternative between fear and surrender. As we listen to his words, let us think not merely of Christ or Christianity in a generic sense, but of the riches of the Catholic Faith in its concrete tradition:

It has become fashionable to speak of modern man as having a “buffered self,” impervious to the supernatural, on guard against the divine, no longer vibrating sympathetically with the harmonies of a theophanic world. But there is a subtle illusion in this language. One is not born a buffered self, or fated to be one; one wants to be a buffered self. At the end of the day, might not this fabled “buffered self” be simply a psychological description of the fallen condition of man, out of which he is meant to be drawn by the practice of religion and the operation of God’s grace? The whole force of Catholic spirituality is aimed at breaking down this opposition between the ego and God — an opposition into which we are born, and against which we need to fight every day of our life.