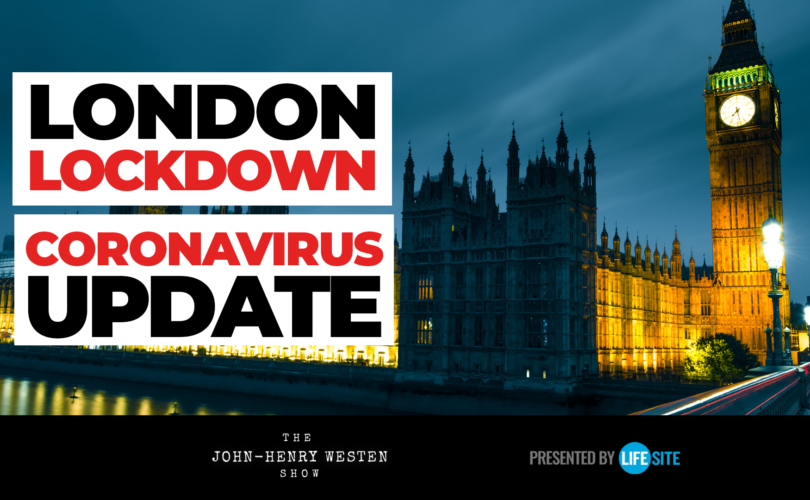 March 27, 2020 (LifeSiteNews) — The United Kingdom is on complete lockdown by order of Prime Minister Boris Johnson, who just tested positive for coronavirus. Churches have been shuttered and the sacraments are cut off, but, astonishingly, the subway system is operating and flights from Iran and China are still taking place.

Today, I spoke with Paul Smeaton to get his take on how dramatic things really are in the UK, as it seems like a total police state has been setup literally overnight.

Paul works for LifeSite as our London correspondent. He is the son of my very dear friend John Smeaton, who runs the Society for the Protection of Unborn children. Earlier this week, John rightly argued that the coronavirus is a “chastisement” for abortion and other sins.

During our interview today, Paul explained that only under extreme circumstances can you leave your house. I told him that it seems to me that London is basically a prison system right now. And he agreed.

Despite the Magna Carta allowing for freedom of the church in England, all houses of worship are closed for the next three weeks by order of the government. This has left Catholics especially concerned about not being able to go to confession or receive the sacraments, Paul stated.

Paul also said he was taken aback by the fact that the bishops, even before the order from Boris Johnson was handed down, decided to cancel masses voluntarily, especially when so many other industries — abortion mills, small businesses — are fighting to stay open.

Paul said he was worried about the indifference Londoners have about the power grab taking place all around them.

“I think we've seen an increase in concern about the risk of the virus itself, but maybe less concern among the general public about the restriction of our civil liberties and about the powers of state is accruing to itself.”

He also noted how just this week former British Prime Minister Gordon Brown called for a “one world government” in order to respond to the coronavirus. Read Paul’s report on that by clicking here.

Paul closed our interview by reminding viewers that, sadly, in London it doens’t look like anybody is doing penance or praying the rosary, as Our Lady of Fatima instructed.

“There isn't much sign of people repenting in the church. There isn't that much sign of people repenting in general society…there seems to be a focus on on trusting the government, on trusting science to deliver us. But I don't think there's been a widespread idea that that perhaps we need to review our lives….things can't continue as they have been.”